Ever since giving one of the opening speeches at CPAC 2019, the Left has been atwitter on social media and in various online publications because of the comments that Sebastian Gorka made. He referenced the fact that the Democratic Party, with AOC’s “Green New Deal” want to take away your hamburgers. Morning Joe lampooned the comments; the so-called “Counterterrorism expert,” Malcolm Nance, mocked the commentary on Twitter. But, depriving ordinary people of food is precisely what Communism–which, let’s face it, that’s what “democratic socialism” is–did. Some of the worst genocides that occurred in the twentieth century centered around Communist regimes creating mass starvation due to their social engineering policies.

The Communists, and their “democratic socialist” heirs here in America believe in a pseudo-scientific theory of governing. The anointed few–the vanguard, of the Communist lexicon–are so “enlightened” that they alone have the capacity to manage every aspect of human life, if only they were given the power to do so. In the United States, such centralization of power is anathema to most people. But, the technocratic, socialist elite continue to fight for this kind of control. These “elites”–of which, Alexandria Ocasio-Cortez is now a part–look upon beef and other forms of meat as dangerous to the environment. The anthropogenic global warming crowd truly believe that cow flatulence is one of the most significant contributors to global warming, since flatulence is nothing more than a release of methane. And, the global warming crew believe that methane may be even more dangerous to the environment than the carbon emissions that fossil fuels emit. So, the Left wants to do away with meat entirely.

In both the Soviet Union during the Ukrainian famine, and in the People’s Republic of China, during Mao’s Great Leap Forward, millions of innocents were used as pawns in Stalin and Mao’s respective, murderous experiments in social re-engineering. In the first case, upwards of 6 million innocents are believed to have been killed by Stalin’s forced collectivization of the fertile farmlands of Ukraine. After having seized power in a bloody revolution, the Communists who ran the new Soviet Union were not content to simply enjoy their vice-grip on power. They took power and kept killing for more. Inevitably, Stalin sought to control all food sources and to make it “more equal.” The results were devastating.

A similar disaster occurred during Mao’s Great Leap Forward, although on a much greater scale, with nearly 45 million outright murdered or starved to death. Communists took over the production of food in countries with rich histories of agriculture and they utterly destroyed those industries, in order to make their “workers’ paradise.” Ideology and a quest for absolute power resulted in starvation. So, Joe Scarborough, this is not about cheeseburgers. Although, it is about Left-wing ideology depriving ordinary people of the basic essentials of life.

Under Stalin and Mao, the calls for collectivization of farmland was under the guise of creating “equality.” Today, the calls in the United States from AOC and her cohort of “democratic socialists” in Congress target a key food source–protein–under the guise of saving the planet from manmade greenhouse gases.

Set aside the political aspects of the Green Bad Deal, just look at the implications for human health in the United States. The protein that human bodies derive from meat makes them stronger; it makes us healthier. Look at the studies on the dangers of vegetarian and vegan diets.

There’s something more: the cheeseburger, in particular is a singular example of American culture. The Left has been waging an unremitting assault upon American culture; tearing down symbols of past greatness, attacking traditional values that helped build this country because they were “patriarchal” or “racist.” Now, the target is the quintessential American food item: the burger. Make no mistake: this is about redefining America to more closely resemble a socialist state. They don’t care about saving the environment. The Left just wants to take the things you love and force you to accept their worldview and way of life–just as Stalin and Mao and every other Communist totalitarian has done.

The Left does want to take your cheeseburger and this is yet another symbolic–and real–fight over our God-given freedoms, which are, yet again, under attack by the American Left, who are draping themselves in the color green to distract and obfuscate from their true intentions. 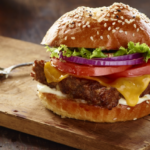 Yes, Socialists Really Do Want to Starve You