Back in studio after a week off, Sebastian spends the entire first hour with J.D. Vance, author of “Hillbilly Elegy” and a Republican candidate for the vacant United States Senate seat in Ohio in 2022. Sebastian and J.D. discuss the onslaught of attacks against J.D. by the mainstream media and NeverTrumpers after announcing his candidacy, and why this means that he is actually the best candidate in the race. They also reflect on his backstory, as documented in his seminal work “Hillbilly Elegy,” and how his refusal to abandon his working-class roots have defined him as a political figure and earned him the ire of the political elite. In closing, they discuss how important it is to remember that, at the end of the day, we as a country should not be fighting for our own goals, but for the common purpose of securing a stable future for our children and our children’s children. 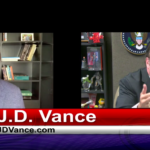 Why they hate you, me, and Tucker. J.D. Vance with Sebastian Gorka on AMERICA First