For years, key leaders of the Democratic Party called for the construction of a border wall, as well as immigration reform, to better restrict the flow of illegal immigration into the country. In 1994, Senator Dianne Feinstein (D-CA) took to the press to warn about the dangers posed to the country by the unfettered illegal immigration flowing northward into the United States from neighboring Mexico. Senator Chuck Schumer (D-NY) spent much of the 1990s making similar arguments. Other Democratic leaders during the Clinton Administration worried about the negative impacts that the presence of large numbers of low-wage workers would have on African-American and blue-collar workers (who were, at the time, the Democratic Party’s primary constituencies).

As time progressed, however, the Democrats began changing their tune–albeit slowly.

Still, as late as 2006, the Democratic Party voted overwhelmingly for the construction of a border wall meant to curb the ceaseless migration of people into the United States illegally. During that year, then-Senator Barack Obama (D-IL) said, “When I see Mexican flags waved at pro-immigration demonstrations, I sometimes feel a flush of patriotic resentment. When I’m forced to use a translator to communicate with the guy fixing my car, I feel a certain frustration.”

In that year, the Democratic Party voted in favor of the Secure Fence Act, which called for the construction of a 600-mile wall (Democrats would carp and claim it was a “fence,” but it’s a barrier along the border, in other words, it’s a form of a wall). Though, once the Democrats won the midterms that year and gained a majority in Congress, the Democratic Party amended the 2006 bill and made the creation of a physical fence “optional.”

Yet, the 2008 official Democratic Party presidential platform identified illegal immigration as a potential threat to the United States. It read, “We cannot continue to allow people to enter the United States undetected, undocumented, and unchecked,” adding that, “those who enter our country’s borders illegally, and those who employ them, disrespect the rule of law.”

From there, in 2013, a bipartisan consensus-building initiative was formulated by the late-Senator John McCain (R-AZ) and a cadre of other Republican and Democratic Party notables–the Gang of Eight–which entailed the construction of a massive, 700-mile border wall. It also called for the crafting of a very difficult path to citizenship program for illegal immigrants already inside the United States (that would take a decade to complete). This was known in 2013 as the “Southern Border Fencing Strategy.”

As Byron York at The Washington Examiner recently noted:

It couldn’t have only been political calculations made by cynical Democratic Party leaders that necessitated their party’s about-face on the border wall. Speaking recently to Trish Regan on Fox Business Network, Dr. Sebastian Gorka offered his belief that Democratic Party intransigence to the wall was nothing more than “the politics of personal obstruction.”

Reversals on political stances do occur over time in both political parties. Yet, the Democratic Party’s reversal on illegal immigration, let alone funding a border wall (for a meager $5 billion), are whiplash-inducing.

Yes, the Democrats are excited to corner the bulk of the votes for a population they believe to be America’s new political majority. Although, Democratic Party hate for President Trump–and the fact that Trump campaigned so vociferously on the idea of building a physical wall along the border–has elevated the political war of words over the funding of the wall to symbolic levels. In other words, the wall has become a stand-in for the Democratic Party’s resistance to Trump, as much as its successful construction will be viewed as tangible proof by Trump supporters that the president keeps his promises (unlike many of his predecessors). By denying Trump this political victory (as well as by preventing the government from adequately defending the country along its southwestern border), the Democrats believe they are going to gain immense political advantages heading into what will likely be the contentious 2020 presidential elections.

Of course, the Democrats aren’t just potentially denying a political victory to the president. They are directly endangering you. In the month of December alone, there was a 300 percent increase in violence along the U.S.-Mexico border! Drug overdoses from narcotics produced by cartels operating along the broken southwestern border (and smuggled across that border) is up to record-breaking levels (in 2017 alone, 72,000 Americans died from overdoses). 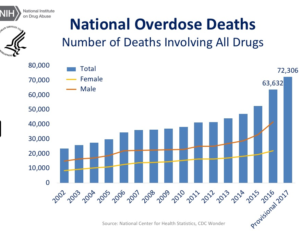 Courtesy of the National Institute of Drug Abuse, 2017.

Gang violence has risen along with the increase in illegal immigrants into the United States. Moreover, the Immigration and Customs Enforcement (ICE) agency has made 158,581 administrative arrests of illegal immigrants this year–with 50,703 being brought up on assault charges.

It’s a sad testament to the time in which we live, when the purportedly objective “mainstream” media is silent about the rank hypocrisy the Democrats have exhibited over the matters of illegal immigration and building a border wall. This isn’t a morality play, as Speaker of the House Nancy Pelosi (D-CA) insists. For the Democrats (and their allies in the media) resisting a border wall is simply about hurting President Trump politically. As evidenced above, this fight is endangering you, your family, and your community. 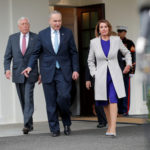 Why the Democrats Wanted a Wall and Now They Don’t