With many of President Trump’s greatest accomplishments in office, the positive effects are often two-fold. First, there are the substantial policy changes actually enacted and the subsequent real-world impact of said policies. But second, and just as important, are the constant shifts in the country’s “Overton Window,” as certain actions and stances once considered outside of the general consensus suddenly become workable reality.

Perhaps no other major issue in the Trump Agenda better exemplifies this cultural shift than the President’s masterful handling of trade policy.

Many policies inherited from the Cold War are now, rightfully, seen as antiquated and more detrimental than when they were first implemented. Our relationship with China and the ongoing discussion over tariffs are just two examples.

During the Cold War, America sought to distance itself as much as possible from the evil authoritarianism that was the Soviet Union. But in that effort to defeat the USSR, American society in part – and conservatism in particular – became wedded to the notion that government is always a negative influence, and any form of government intervention should be avoided. As Ronald Reagan famously quipped: “The nine scariest words in the English language are: ‘I’m from the government, and I’m here to help.’”

And while there is truth in the idea that too much government can be a problem, this shouldn’t distort our view of government so much that we view any and all intervention as inherently bad. As we have said before, it was government intervention that desegregated schools and businesses in the 1960s. It was government regulation that implemented workplace safety laws and laws prohibiting child labor. Speed limits are a form of government control as well. But of course, no one is seriously calling for any of these things to be repealed.

But one form of government intervention that has been demonized by some conservatives is the tariff option. Seen as a restriction on the “universal” right to “free trade,” conservatives like Ben Shapiro have so referred to tariffs as “stupid,” and even compared protectionist trade measures to Soviet-style “central planning.”

Our relationship with China is yet another outdated relic of the Cold War. At the time, opening up relations between the U.S. and Red China made sense to President Nixon and the true mastermind of the deal, Secretary of State Henry Kissinger. It was seen as a way to directly undermine the Soviet Union’s influence by forging a tentative bond with the second-largest Communist power in the world.

But this proved to be a short-sighted plan once the Cold War came to an end. As a result, Kissinger helped midwife what has now become the most harmful relationship the United States has ever had with another country outside of all-out war.

Ever since the days of Sun-Tzu, China has sought to play the “Long Game.” And its relationship with the United States is no exception. With the end of the Cold War and the dawn of the new millennium, China has seen its influence over the American economy increase exponentially with its endless stream of exports. “Made in China” became one of the most commonly-seen phrases in America and the West.

With the collision of two such inexorable forces – a rigid anti-tariff dogma and the meteoric rise of industrial China – America was on a collision course for disaster, and the threat of being surpassed economically and geopolitically.

That is why Donald J. Trump becoming President of the United States was such a significant moment in time. As far back as the 1980s, President Trump – at the time still a businessman, with only the faintest hints of political aspirations – was saying the exact same things that he would go on to say during his 2016 campaign: That China has been “ripping us off,” killing American manufacturing jobs, and causing a severe trade imbalance on an uneven playing field. While the Soviet Union was still standing, Donald Trump had the prescience to see the clear danger that was a rising China.

Spencer Morrison of American Greatness said it best: Conservative critics of tariffs and other protectionist measures are thinking too much like “economists,” doggedly maintaining their ideological approach to economic issues rather than thinking practically; they defend their ultra-free market worldview just as vigorously as Marxist “economists” defend socialism.

Morrison best sums up the entirety of the divide on the American Right, and which side should obviously be given more authority on the issue: “We need to think like businessmen – not economists.” That is exactly why, in 2016, we elected a businessman as President.

President Trump’s economic results thus far speak for themselves, from the historically low employment, to incredible GDP growth, to the increase in wages. But the fact that his election was described by celebrated “economists” as an economic apocalypse is proof that these so-called “experts” have no idea what they are talking about when it comes to the real world.

Not only does history prove that tariffs absolutely do work, but if anything, America owes its rise to greatness to the earliest tariffs in its history, starting with the very first tariff enacted in 1789 by President Washington. As Pat Buchanan said, tariffs are “the taxes that made America great.”

This is because it was Protectionism that ultimately shielded the economy of the United States, still in its infancy, from the behemoth that was the British Empire’s global economy. We had won our independence by taking up arms, but we sustained our independence through the use of tariffs. Our economy eventually rose to commanding heights that were easily on par with the British. And the rest is history.

China seeks to mimic this rise to global power via skyrocketing economic growth. Beijing is taking full advantage of a command economy, where the workers do not have the benefit of protection with workplace safety regulations, child labor laws, and basic civil liberties and the individual freedoms that we have.

With their capacity for mass production significantly increased by this use of modern-day “slave labor,” it’s clear to see why their products, superficially, are much cheaper than American goods, since our workers are blessed with such protections and rights. Of course, this is hardly the “level playing field” that free-trade purists like Shapiro claim that we have.

But nevertheless, we can still win against China if we react fast and decisively, as President Trump has already been doing.

As Mark Stys pointed out in his recent appearance on America First, the United States still dwarfs the Chinese economy: The American economy is worth $21 trillion to China’s $13 trillion, thus making theirs worth only about 60% of ours. China is far more reliant on exports, exporting $540 billion a year while the United States only exports $120 billion. To put this into perspective, this means that every $1 lost by the American economy is equivalent to $8 lost in China.

It makes sense, then, that in response to President Trump leveling over $200 billion worth of tariffs earlier this year, China reacted with a measure that was puny in comparison, valued at just $60 billion. This makes it easy to see why Stephen Moore is so confident in his prediction that America will emerge victorious from this overblown “trade war.” As Moore once said: “When America sneezes, China gets the flu.”

In any economic environment where there exists a surplus of supply, the buyer always has the upper hand against the seller, since they can take their business elsewhere. America has certainly proven to have no shortage of access to natural gas and other energy resources, and the same is true for many other goods: On top of access to dozens of other potential seller countries, we have the potential to produce for ourselves rather than purchase from another country.

This is why the resurgence of American manufacturing jobs and our country’s now near-total energy independence are so important: If we become dependent on ourselves alone, with only minimal imports, while continuing to export our goods to other countries besides China, then that country’s economy will be gravely exposed.

Once the curtain is pulled back on the illusion of China’s economic strength, their rise will come to an end. Yes, they will still likely turn to other buyers in the event that we no longer are their top recipient of exports. But no other country on the face of the planet has the buying power that the United States has. Numerous other countries would flock to fill in the gap left behind by China’s position in our import-export economy, while also reaching out to us to purchase our own products. Both a top buyer and a top seller, America would easily reclaim its position as, far and away, the world’s dominant economy. 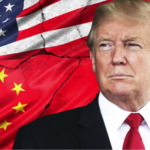 Why Tariffs are Necessary, Beneficial, and Smart