It has been said many times before on this program, but it bears repeating: The 2020 United States presidential election will be the most important election in modern history, for it presents a clear choice for the American people between two diametrically opposed scenarios. Will we stand behind the populist, MAGA, and America First message of the Trump Administration and give President Trump another four years, or will the movement be overwhelmed by the globalizing coalition of the Democrats, the Fake News media, Hollywood, academia, Big Tech, and the Deep State?

There are, understandably, many reasons to be nervous about the election, not least of which being rampant election fraud. The ongoing Coronavirus pandemic and the nationwide economic shutdown has caused a socio-political upheaval unrivaled in modern history, and common wisdom would indicate that any incumbent who oversees such a downturn is guaranteed to lose. But no president has defied political norms and Establishment expectations more than President Trump.

And, despite the media’s best efforts to portray Joe Biden as leading President Trump, numerous underlying numbers seem to indicate that the opposite is true.

The Left and the Fake News media are putting all of their effort into reporting national numbers rather than focusing on state-by-state polling. What polls of battleground states do show is vastly different from the pro-Biden narrative: Even a CNN poll was forced to admit that President Trump leads Biden by an average of seven points in 15 battleground states. When the poll is broken down to various key voting demographics in those swing states, including voters under the age of 50, voters without college degrees, and independent voters, Trump leads Biden in almost every demographic.

A recent CNBC poll shows similar results, with Trump leading Biden in the swing states. When those results are broken down, the President scores a double-digit lead over Biden when voters are asked who they think is better fit to run the economy, as well as a 9-point lead among independent voters.

Another key factor the media is grossly underreporting is voter enthusiasm, especially among Republicans. Given the gulf between Biden and the President, it is not surprising that there is far greater energy amongst voters who support the incumbent than those who support Obama’s former VP. One poll from Emerson College showed a staggering 19-point lead for Trump voters over Biden voters in enthusiasm.

Enthusiasm is not only key, but is tied closely to another common trend in modern presidential elections: Personality. Consider just the last six decades of American politics, and try to find even one presidential election where the cooler, more magnanimous candidate with the bigger personality lost to the boring, dull, and uninteresting candidate. From Trump vs. Clinton, to Obama, Clinton, and Reagan, as far back as Kennedy vs. Nixon, it is a long-standing, if not unspoken, political reality that personality and charisma alone have often decided victory, even before other factors such as policy differences. In a far and clean fight, an utterly boring and drab candidate like Biden simply cannot defeat a dominating figure like President Trump.

One metric of gauging voter enthusiasm is the presidential primaries. Although the media rarely pays any attention to the primaries of the incumbent party, the Republican primaries of 2020 are definitely worth noting. Stunningly so in fact.

First, some context must be provided: In the 2016 primaries, in what was at the time the largest presidential primary field in American history, then-candidate Donald Trump smashed the previous record for the highest amount of popular votes ever won by the winner of a Republican primary season, with 14 million votes (surpassing the previous record of George W. Bush’s 12 million in 2000).

In 2020, President Trump not only broke the record for the highest amount of total popular votes won by an incumbent president in their primaries, but his current total stands at 13.6 million. This means that, even though he is the incumbent and went largely unchallenged this year, he is still set to match his own record of total Republican primary votes. Such a result can only indicate that there is at least just as much enthusiasm for President Trump now as there was four years ago.

By contrast, the Democrats are currently lagging behind their own 2016 totals in 2020. In the 2016 primaries, between Hillary Clinton and Bernie Sanders, there were a total of just over 30 million votes cast, with Clinton receiving 16.9 million. In the 2020 primaries thus far, only about 27 million votes have been cast, with Biden currently holding just over 12 million. Not only does the frontrunner lag severely behind the previous nominee’s primary totals despite this year’s primaries being far more competitive, but he even has fewer votes than the unchallenged incumbent president has in his own primaries.

But an even stronger indication of Republican voter enthusiasm has been in the two most recent elections in America: The special election in California’s 25th congressional district, and the city council elections in Staunton, Virginia.

In the former, Republicans retook a Democratic House seat in California for the first time in 22 years, and this despite the election being conducted entirely by vote-by-mail, in a seat that the Democrats had just taken by 9 points in 2018. With massive turnout from Republican voters, as well as a strong performance among traditionally Democratic minority voters and independents, Congressman Mike Garcia won the election by 10 points over the Democratic nominee.

In the latter, Republicans completely swept Democrats out of power in a city that had voted for Barack Obama twice, voted for Hillary Clinton, voted for both Terry McAuliffe and Ralph “The Butcher of Richmond” Northam as governor, and had voted heavily for the Democrat in the most recent U.S. House election. And even though there were nearly twice as many Democratic votes cast this year as there were in 2016, Republican turnout still completely crushed the Democrats and saw all three Democratic city council members replaced with Republican challengers.

Make no mistake: We must not allow ourselves to become complacent. This is still the most important election of our lifetimes, and we must do everything we can to get as many Republicans and other right-leaning voters to the polls this November. But we must be motivated to do this because we know that ours is the winning argument.

On every major issue – from immigration and trade, to China and globalization – President Trump has been proven even more correct as a result of the Coronavirus. Now the lines have been drawn: President Trump and the Republicans are the party of reopening the economy and getting America back to work, while Democrats are the party of prolonging the miserable lockdown and arresting Americans for simply trying to go back to work.

If we make this dichotomy abundantly clear and keep mercilessly hammering away at the Democrats – and their corrupt mascot for this year, Joe Biden – then President Trump just might pull off an electoral landslide previously thought unimaginable. There is a movement growing all across the country; it is up to us to harness it for good and guarantee President Trump another four years. 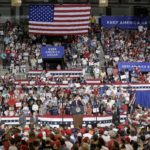 Why President Trump Can Win