There is a reason why John Solomon is one of the most significant journalists and influential investigative reporters in America today: He is boldly taking on Deep State corruption and the political elite every single day, with his articles producing some of the most stunning revelations about the political class, the mainstream media, and their coordinated efforts to cover up corruption. And always backing it up with irrefutable documentation and proof.

The latest attempt to smear Solomon and discredit his incredible work shockingly comes from none other than the once-reputable publication where he used to work, The Hill.

In an obsessively long hit piece published yesterday, Hill staffers cowardly hiding behind anonymity attacked Solomon with false claims about his sources, attempted to portray him as a “fringe” figure, and even took shots at two other brave investigators, Joe DiGenova and Victoria Toensing, all for the purpose of covering up corruption by the Bidens and the Deep State.

Throughout the piece, one point that the Hill frequently references is the fact that “an editorial decision was made to label Solomon’s work as opinion” in May of 2018. Using this, the piece claims that because Solomon himself did not promote these articles as “opinion,” he was essentially misrepresenting his seminal work in subsequent news coverage of his pieces.

This is nothing more than an Orwellian newspeak tactic. Just because some politically-motivated editor unilaterally decided to declare Solomon’s work as “opinion” does not mean they are in fact opinion pieces. Every single major story Solomon has reported since the upset victory of candidate Trump has been demonstrably correct, backed up by the facts and the evidence, slapping an “opinion” label on them because you wish to protect corrupt Swamp officials does nothing to diminish the facts of the case. It only serves as a blatant attempt to discredit Solomon because his reporting exposed numerous inconsistencies in the mainstream media narrative regarding the “Russia” hoax, Ukraine, and the Deep State.

If anything, retroactively labeling his work as “opinion” and then criticizing Solomon for not taking up the label himself is a journalistic equivalent of the process crimes which Roger Stone and General Michael Flynn are now battling against; this “opinion” vs. “journalism” debate would not be an issue if the Hill had not intervened and muddied the waters with their own politically preferred terminology in the first place.

Another important thing to note about the hit piece is that it obsessively focuses on the semantics of “opinion” as a cover for the fact that there is no concrete evidence of wrongdoing on Solomon’s part. They are unable to provide even a single shred of proof that Solomon misquoted someone, stated false facts, or otherwise displayed any journalistic malpractice in his articles, and instead repeatedly turn to the higher authority of the government for validation of their attacks.

With regards to Solomon’s explosive column on Joe Biden’s corruption, specifically his firing of Ukrainian Prosecutor General Viktor Shokin in order to protect his son Hunter, the Hill simply resorts to the same tired and debunked claim that “officials in Kyiv and Washington” have cleared Biden of any wrongdoing.

They once again fail to present any evidence that Biden is not corrupt and that his son Hunter did not acquire his $80,000 a month Ukrainian job because Burisma wanted political protection from his father. By doing so The Hill is committing the worst type of FakeNews against one of its former employees. By touting that government officials supposedly found nothing wrong with Biden’s conduct, they are essentially repeating the same absurd argument that the Deep State, upon investigating the Deep State, found that the Deep State did nothing wrong. Of course a corrupt government is going to insist that it has done nothing wrong; that is exactly why independent investigative journalists like Solomon are necessary to the functioning of our Republic and to holding corrupt officials accountable.

The Hill laughably provides “proof” that Solomon’s work is fiction by pointing out that “State Department officials” and “U.S. national security agencies” all came to the conclusion that “Ukraine did not meddle in the 2016 U.S. presidential election.” They expect to their readers to be so stupid that we’ll believe that the same “government agencies” that insisted there was Russian collusion are somehow telling the truth that there wasn’t Ukrainian interference? They expect to be able to fool us twice, as if we aren’t going to eventually question the track record of such dubious wide-ranging claims by the parties who have most to lose Afro their being exposed.

What The Hill Got Wrong

There is only one point where the Hill actually attempts to cite a specific instance of wrongdoing on Solomon’s part, and here they fail again.

On the subject of Solomon’s relationship with the investigative lawyers Joe DiGenova and Victoria Toensing, the article claims that Solomon failed to disclose that DiGenova and Toensing were his lawyers, when he wrote an article in 2017 that quoted Toensing.

However, as Toensing herself confirmed on Twitter, she was “not John’s lawyer in 2017.” Even more surprising, she revealed that “The Hill never bothered to ask” when she was actually serving as Solomon’s attorney. In just that one sentence, the Hill committed more journalistic malpractice than John Solomon ever has since he started revealing the crimes of the Deep State.

Through all of this, it appears that the leadership at the The Hill has truly forgotten what it means to be an investigative journalist. The power of the pen and the printing press always lies with one person who is willing to pursue the truth and the facts, no matter what the cost.

Watergate was not exposed because the entirety of the Washington Post threw all of its resources into the matter, but because two men tackled the story on their own. The same goes for John Solomon: Even as the larger media apparatus of the Hill works overtime to discredit him and cover up the truth, his acts of real investigative journalism are still thriving specifically because he is working against the establishment. Throughout modern history, no matter who it is that tries to cover up a story, the truth will always be revealed, one way or another. For more, see our latest America First interview with one of the few true investigative journalists left in American media. 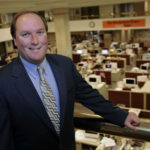 Why is The Hill Smearing John Solomon?