With six of Joe Biden’s cabinet members confirmed by the Senate, you need to know who is running the regime in the name of a man who is clearly not in charge, physically or cognitively. While Biden signs all the Executive Orders shoved in front of him, who will really be running the affairs of state?

Not a Strategic Mind Among Them

Many recent presidential administrations have seen at least one or two major “strategic” minds emerge at the Cabinet-level, with select advisers serving as close confidantes to the President to provide him with more direct messaging and strategic input.

Reagan had his “Kitchen Cabinet.” David Axelrod was the “brain” of the Obama administration, and John Podesta would have been the man behind the curtain in the Hillary Clinton administration that never happened. In the Trump administration, some of the leading strategic minds included Steve Bannon, Stephen Miller, and the President’s son-in-law Jared Kushner.

And yet, with one quick look through the Biden roster, the question immediately arises: Who will be Biden’s Axelrod or Bannon?

Officially, the next holder of the title of Senior Adviser to the President has been designated as Cedric Richmond, a virtually unknown Congressman from Louisiana. But Richmond has no name recognition outside of his congressional district, and has previously shown no indications of being a strategic mastermind in any classic sense of the term.

Indeed, this lack of a serious strategic thinker anywhere in the incoming administration only further indicates that the decision-making will not come from genuinely intelligent political minds, but instead from corporate interests that back many of his picks.

From Wall Street to Pennsylvania Avenue

Several of Biden’s picks are clear examples of the “revolving door of politics,” in reference to those who quickly move from big business to government.

Two of the most obvious cases of this are in Biden’s selections for Secretary of State and Secretary of Defense. Anthony Blinken, Biden’s Secretary of State, is one of the founding members of the consulting firm WestExec Advisors, which has represented a number of major companies as its clients; among these high-profile clients are Bank of America, Facebook, Uber, Boeing, and AT&T. It has also represented foreign companies as well, such as the Japanese conglomerate SoftBank.

And Lloyd Austin, Biden’s Secretary of Defense, made a very noticeable career shift after he left the armed services in 2016; he went on to serve on the board of Raytheon, which, at an estimated revenue of nearly $100 billion in the last year alone, is one of the largest defense contractors in the world. The presence of a man with such connections to a private defense contractor now being in charge of the United States military is more than enough reason to be concerned about the return of what President Eisenhower famously referred to as “the military-industrial complex,” where certain individuals push for more war and overseas intervention purely for profit. Even more disturbing are Austin’s statements during his confirmation hearing on political purity and that he sees “enemies” within the armed forces.

Some of Biden’s nominees are still willing to represent corporate interests over American interests even when they themselves had no such experience in the world of business. Biden’s newly-confirmed Secretary of the Department of Homeland Security, Alejandro Mayorkas, was criticized during his tenure as Director of U.S. Citizenship and Immigration Services (USCIS), after a DHS Inspector General’s report found that he may have utilized the EB-5 investor visa program to benefit his political allies with vested interests in certain corporations. After a two-year investigation, the IG concluded in 2015 that the program, which offered green cards to foreign investors who invest at least $500,000 into job creation efforts in the United States, ended up heavily benefiting companies that were, naturally, connected to prominent Democratic figures on Mayorkas’ watch; among the companies that were given preferential treatment by this program were the Sahara casino and hotel in Las Vegas, which was backed at the time by then-Senate Majority Leader Harry Reid, as well as an electric car company led by then-Governor of Virginia Terry McAuliffe. Now, the same man who turned the EB-5 visa program into a lottery for his friends in the Democratic Party, and sold out American workers in the process, is in charge of the entirety of the DHS.

While familiarity may at times be a comforting thing, seeing the return of multiple figures from the Obama Administration should cause great concern; likely proof that the Biden Administration will behave in a similarly anti-American, pro-Globalist and multilateral fashion as its its ideological predecessor.

Among Biden’s most notable returning picks are Janet Yellen for Secretary of the Treasury, as well as Merrick Garland for Attorney General; Yellen was appointed as Chair of the Federal Reserve by Obama in 2014, while Garland was Obama’s failed nominee for the Supreme Court seat left vacant by the death of Justice Antonin Scalia in 2016, which the Republican Senate ultimately blocked so that President Trump could instead appoint Neil Gorsuch to the seat.

Some of the lesser-known appointments returning from the Obama Administration are two former Chiefs of Staff; Denis McDonough, who served as Obama’s Chief of Staff for the entirety of his second term, is Biden’s pick for Secretary of Veteran’s Affairs, even though McDonough himself is not a veteran. For the position of his own Chief of Staff, Biden has picked Ron Klain, who previously served as his Chief of Staff for the first two years of his vice presidency.

Another retread is the failed presidential candidate John Kerry, who lost to George W. Bush in the 2004 election. Following that election, after continuing to serve in the Senate from Massachusetts, he was selected as the Secretary of State for the entirety of Obama’s second term, succeeding Hillary Clinton. After being out of politics for four years, Kerry was announced as Biden’s pick for the newly-created and nonsensical position of “Special Presidential Envoy for Climate,” which appears to have been created solely for the purpose of giving Kerry an excuse to get back into the White House in any capacity.

Speaking of failed presidential candidates, Biden also gave a spot to one of his former rivals in the 2020 Democratic primary, former South Bend Mayor Pete Buttigieg. Despite having no political experience any higher than being a mayor, Biden selected Buttigieg to be his next Secretary of Transportation, in a deal that some view as rewarding Buttigieg for strategically withdrawing from the primaries right before Super Tuesday, allowing Democratic voters to coalesce around Biden’s candidacy and stop Bernie Sanders from winning the nomination.

But Buttigieg is not the only Biden Cabinet nominee who is facing criticism for being inexperienced and unqualified for his specific position. Two other nominees included Ohio Congresswoman Marcia Fudge for Secretary of Housing and Urban Development (HUD), and California Attorney General Xavier Becerra for Secretary of Health and Human Services (HHS). It has been pointed out that Fudge has very little experience in housing policy, and in fact previously lobbied to be Biden’s pick for Secretary of Agriculture; thus, her selection for HUD instead seems to indicate that hers was an obligatory selection for any Cabinet position, rather than a specific choice for a particular department.

Similarly, Becerra’s experience on health policy is extremely limited, with only a brief stint on the House Ways and Means Committee’s Subcommittee on Health. As Attorney General of California, one of his signature issues is supporting open borders policies and opposing enforcement of immigration laws. It is not hard to guess, then, that such an individual being in charge of HHS would likely prioritize the “rights” of illegal aliens over American citizens, a policy that is already being enacted by the Biden Administration.

Revenge of the Establishment

An overall look at Biden’s Cabinet certainly does raise issues, but not just for pro-America First patriots. The radical wing of the Democratic Party, including socialists such as Bernie Sanders and Alexandria Ocasio-Cortez, are clearly unhappy with his selections. Despite pandering to the far-left and using some of the most extreme rhetoric on the campaign trail, Biden has ultimately hedged his bets with his fellow establishment Democrats rather than please the radical grassroots.

Whether that’s better or worse than an administration full of new, radical faces is as yet unclear, and may in fact result in a growing internal split within the Party and the administration. 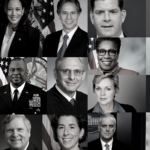