Alongside the issues of immigration and trade, President Trump’s historic victory in 2016 was due in large part to his focus on foreign policy. As a candidate, Donald Trump vowed to bring about a positive change to the direction of American diplomacy and international relations, one that would thread the needle between George W. Bush’s zealous interventionism and Barack Obama’s weak “lead from behind” strategy.

And now, three years into his presidency, he has done just that and kept his promises to the American people. Through a combination of hardline diplomacy, calculated tariffs, restrained but decisive displays of military power, and a willingness to make justifiable threats for the broader goal of peace, a “Trump Doctrine” has indeed taken shape, and proven historically successful.

First, as our friend Mackubin Owens explains in his excellent piece at American Greatness, President Trump approaches foreign policy the same way he approaches any other issue: As a Businessman. Therefore, he is a pragmatist, not an ideologue. As a result, he does not try to apply the same blanket approach or methodology to every single problem; rather, he addresses each and every single issue based on which tactic will be most effective for that particular challenge.

That is why he twice launched missiles into Syria in response to chemical weapons attacks, while showing restraint and refusing to do the same with Iran for a lesser offense.

He has taken unapologetically hardline stances against dictators in Cuba and Venezuela, while also being willing to negotiate with Kim Jong-Un in the interests of peaceful denuclearization. He has used tariffs both as a means of leveling the economic playing field against China, as a negotiation tactic with Mexico, and as a punishment of the strictest order against Iran.

He has withdrawn from disastrous international deals such as the TPP, NAFTA, the Paris Accord, and the Iran deal, while implementing new agreements such as the USMCA.

But beyond a case-specific approach, President Trump’s foreign policy approach has five clear pillars, as described by Owens, that help guide its overarching themes and tie everything together into a basic theme.

Those five pillars are: Healthy nationalism, a state-centric view of international affairs, armed diplomacy, using America’s economic strength and energy dominance as a negotiating tactic, and a defense of classical liberal principles.

Each of these are exemplified by numerous clear examples of the President’s policy, both in rhetoric and action. Of course, he has made it very clear that he is a nationalist, and it goes without saying that he believes in America First.

With America’s newfound energy independence, President Trump was in a strong position to put the onus directly on Middle Eastern nations themselves, as he did in Riyadh, to deal with the problem of radical Islamic terrorism, as America is no longer dependent on Middle Eastern oil. And of course, with the roaring economy, President Trump has used all the leverage at his disposal to take the economic fight directly to China.

And, as Owens points out, perhaps no declaration better encompasses the President’s dedication to the values of Western Civilization than his historic speech in Warsaw, Poland.

Another excellent long-form take on the Trump Doctrine comes from Angelo Codevilla at the Claremont Review of Books. In an article published less than a month before the 2016 election, Codevilla focuses on the significance of “America First.” In particular, he explains how an America First foreign policy is significant because it directly contradicts the conventional “wisdom” of the foreign policy elites who reigned before Trump came along.

Codevilla points out that such an America First approach was the favored outlook of our nation’s earliest and greatest presidents, from the Founding Fathers to Abraham Lincoln and Theodore Roosevelt. “The common sense of the men on Mount Rushmore,” Codevilla says, was to “interfere in nobody’s affairs and suffer no interference in ours.”

That outlook changed with the outbreak of both World Wars, which permanently shifted America into a significantly more involved role on the international stage. Subsequently, American entry into the United Nations and the dawn of the Cold War saw the rise of a more black-and-white worldview, where increased American military intervention overseas was the only viable method for beating back the rising Communist behemoth, from Korea to Vietnam; this was the core of the theory of “Containment.”

Strangely enough, such an aggressive foreign policy even united factions of the American political elite, on the Left and the Right. Codevilla describes how, despite their obvious policy differences at home, “Liberal Internationalists, Realists, and Neoconservatives” all share the same goal of spreading their values – whatever they may be – to other countries around the world. But their continued power grabs and expansionist actions have only “sown disrespect for themselves and for our America.”

As a result, the 2016 election was a referendum on decades of a failed foreign policy orthodoxy held by the nation’s elites that went unchallenged for generations; by that point, “citizens whose long simmering dissatisfaction with their works had boiled over into disrespect.”

To this end, Codevilla argued then – from a pre-election mindset – that “America First” was not only important because it would be a return to the methods and beliefs of the Founding Fathers, but because it marked a much-needed change to a particular segment of the elite, and to one of America’s most important issues, that had gone unchanged for far too long. His article has proven quite prescient as the first two years of Donald Trump’s presidency have unfolded.

This application of a more practical approach, one that is based in pragmatism and American leadership while at the same time demonstrating restraint, is outlined in another erudite essay by Michael Doran of the Hudson Institute, with a focus on perhaps the most complex and multifaceted area of foreign policy in our world today: The Middle East.

Building off of Codevilla’s broader point, Doran writes that the Trump Doctrine is about rejecting past mistakes and showing a “willingness to question foreign policy dogmas” of the past, which Doran says could result in a “legacy-cementing achievement” for President Trump in regards to the Middle East.

President Trump has been consistently and diligently focused on the single biggest threat in the Middle East: Iran. President Trump, as Doran says, seeks to avoid the miserable mistakes made by his two predecessors, avoiding the miscalculations of Iran by Bush and the open-armed embracement of Iran by Obama. Instead, he is focusing on the most difficult, yet most rewarding, course of action against this rouge state: Coalition building.

By reaching out equally to such vastly different nations as Israel, Saudia Arabia, and Turkey, President Trump is engaging in work that, while not “glamorous or inspiring,” could very well do more to effectively deal with Iran and provide American foreign policy with a much-needed “steely-eyed realism” than any other approach in recent memory.

Another expert on foreign policy is the Heritage Foundation’s Jim Carafano, who has written at great length about international affairs and the Trump Administration’s new policies.

In one particular piece, Carafano argues that perhaps the greatest strength of the Trump Doctrine is the President’s leading by example, in a manner that ultimately “sell[s] Trumpism to the world.” Just as President Trump focuses on “America First,” so too can other countries choose to put their own interests first rather than serve a broader globalist order. Carafano writes that through this approach, it may be possible to find a “sweet spot where our goals and those of our partner countries converge,” rather than simply dictate our policies to others.

This approach would also avoid the mistakes of both Bush and Obama, by rejecting “regime change or nation-building” in favor of promoting “good, stable governance and institutions – not to drive particular political outcomes.” By using soft power and leading by example, the Trump Doctrine can initiate more positive changes to countries and civilizations around the world than any brute force ever could.

In summary, the Trump Doctrine is primarily America First, but is also based around President Trump’s pragmatic, realistic, and diplomatic view of the world, which are all based on his decades of experience as an international businessman.

He is not bound by ideology, approaches each issue on a case-by-case basis, and seeks to lead by example rather than force his way on others. He plays hardball in negotiations, often putting the other side on defense and leaving them coming back for more. He carefully picks and chooses which nations to be harsh towards and which nations to be more welcoming with. He has reinforced crucial alliances, while also making our allies more accountable. He has tripled down on brutal enemies, while opening doors to other enemies that could make for potential future allies.

That straight-forward and realistic approach, with a prioritizing of American interests above all else, is exactly why the Trump Doctrine is such a resounding success, and why 63 million Americans elected him as Commander-in-Chief. 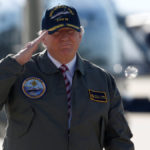 What is the Trump Doctrine?