One of President Trump’s most decisive actions in the wake of the violent riots across America has been to officially declare Antifa a terrorist organization. This is a very welcome and significant step, but it also means that we must become much more familiar with who, exactly, our newest domestic enemy really is.

The name “Antifa” is derived from “anti-fascist,” and draws its name from the German anti-fascist group, Antifaschistische Aktion, founded in the early 1930s in opposition to the gradual rise of the National Socialist Party of Adolf Hitler. It is from this group that most modern Antifa groups took the logo of the two flags, one red and one black.

The original Antifa was in fact the militant wing of the Communist Party of Germany (KPD), founded by the party’s leader and two-time presidential candidate Ernst Thalmann. Under Thalmann, the KPD and Antifa were directly supportive of the dictatorial Soviet government, and considered “fascism” to essentially be the final form of capitalism. As such, the party and movement were not strictly anti-fascist, but rather anti-capitalist, and thus stood in opposition to all other parties. Thalmann was eventually assassinated on Adolf Hitler’s orders in 1944, and the KPD would eventually be banned in West Germany in 1956.

But the modern Antifa movement is a much more recent phenomenon. Although there are a few documented Antifa groups established in the United States as late as 2007, such as Rose City Antifa in Portland, Oregon, the vast majority of groups only began in opposition to the campaign of then-candidate Donald Trump, and then opposition to his presidency. Antifa is the central nucleus of the wide network of far-left anti-Trump groups, which includes others such as By Any Means Necessary (BAMN) and Refuse Fascism. Such organizations formed the “DisruptJ20” riots aimed at disrupting the inauguration on January 20, 2017, which failed and were swiftly stopped by D.C. police.

Antifa also rose to prominence for their actions on U.S. college campuses. One of the earliest examples were the riots on the University of California Berkeley campus in February of 2017, when Breitbart writer Milo Yiannopoulos was scheduled to speak. Antifa stormed the campus, smashed the windows of the building where he was set to speak, and started multiple fires. The speech was ultimately cancelled, and the university faced over $100,000 in Antifa damages.

Similar protests continued throughout the first two years of the Trump Administration, on college campuses and elsewhere. The most infamous example is the Charlottesville rally in August of 2017, where a group of right-wing protesters arrived to protest the vandalizing and removal of the Robert E. Lee statue. Antifa and other far-left groups arrived at the demonstration and clashed with the protesters, with the chaos eventually leading to one death.

One of the strengths of Antifa is their widespread support among the political and media elite, from federal officials to celebrities and billionaires.

Antifa is one of many far-left groups that has at least some connection to the radical left-wing billionaire George Soros. In addition, Hollywood celebrities have poured out their support for the terrorist group in recent days, with many – including Steve Carrell, Seth Rogen, Justin Timberlake, Don Cheadle, and Patton Oswalt – all vowing to pay bail for Antifa rioters who have been arrested in Minneapolis and other big cities. Similarly, 13 staffers for former Vice President Joe Biden’s campaign donated to a bail fund for Antifa rioters jailed in Minneapolis, then bragged about it on social media.

But perhaps most stunning, and terrifying, is Antifa’s numerous connections to the political class. The most infamous example is former Congressman Keith Ellison of Minnesota, who became the first member of Congress ever to be sworn in on the Koran instead of the Bible. Ellison, who also served as Vice Chair of the Democratic National Committee before being elected Minnesota’s Attorney General, once photographed himself holding up an Antifa handbook, declaring that it would “strike fear into the heart of Donald Trump.”

Similarly, the media and many so-called pundits have repeatedly defended Antifa’s actions, often by virtue of their seemingly-agreeable name. Antifa is short for anti-fascist, and therefore, many in the media and society conclude, you must support Antifa or else you are supporting fascism.

Both the mainstream media and the Democratic Party’s open embrace of Antifa, and support afforded by a younger generation of Democrats, have ultimately pulled Antifa away from the fringes to the center of the political stage. Just as the original Antifa in Germany was essentially the militant wing of the Communist Party, so too Antifa has now become the militant wing of America’s modern Socialist Party, the Democratic Party.

Antifa has demonstrated that they are unafraid to carry out acts of violence against anybody, regardless of political affiliation, and even if the victims have done absolutely nothing wrong.

One of the hotbeds of Antifa violence is the city of Portland, Oregon, where it carried out one of the most vicious assaults ever caught on camera, against journalist Andy Ngo. While covering one of the protests, Ngo was surrounded by attackers who all took turns hitting him, kicking him, and throwing objects at him; one of them stole some of his camera equipment, and a milkshake-like liquid in a container was thrown at him, and later revealed to have contained some of the ingredients for quick-drying cement. As a result of the assault, Ngo was hospitalized with cerebral hemorrhaging.

Others have fallen victim to Antifa’s violence, including the most vulnerable in society. Again in Portland, a man and his young daughter were surrounded, harassed, and chased down the street by a mob of Antifa rioters. At an Antifa protest of an event featuring Dave Rubin in Canada, multiple agitators surrounded and screamed at an elderly couple, including a woman with a walker, calling them Nazis and blocking them from simply trying to cross the street. Multiple members of the right-wing organization the “Proud Boys” have been attacked by Antifa; for attempting to simply defend themselves, several of them subsequently received lengthy jail sentences while the Antifa members got off scot-free.

Similar acts of widespread and senseless violence have continued with the latest riots across America. The mass looting, arson, assault, murders, and other acts of violence are all tactics used by Antifa in the past, now occurring on a mass scale. The chaos led to President Trump and Attorney General William Barr formally classifying Antifa a domestic terrorist organization. Some have tried to use the group’s loosely-defined nature as an excuse to claim that such a designation is not appropriate, because Antifa does not have a clear leadership structure. Some have even praised it.

A Long Cycle of History

What many people forget is that the rise of fascism in the early 20th century did not just develop out of nowhere. Weimar Germany saw its streets terrorized by militant Communists who smashed windows and burned businesses, with law enforcement unable or unwilling to stop them. As a result, a group called the Sturmabteilung, more infamously known as “the brownshirts,” arose as a rival militant group set to fight back against the Communists in the streets.

By fighting against the Communist forces, the brownshirts were able to portray themselves as heroes to the German people, thus gaining broader support for their party, the National Socialist Party, and their leader, Adolf Hitler. The National Socialists were then elected to power in the German parliament, the Reichstag, and the rest is history.

While there are hardly any similarities to be drawn between America in 2020 and Germany in 1932, Antifa’s entire message since its inception has been to accuse everyone who opposes them of being “fascists” and “Nazis,” just like the original Antifa did. By their twisted logic, everyone else being a fascist justifies violence against anyone and everyone, including old ladies and little girls. Once considered a fringe movement, Antifa has inveigled itself through the political system with members of Congress as supporters, and with the children of members of Congress as its members.

Barring a sudden reversal of fortune or a swift end to the riots by law enforcement or the military, the outcome of this crisis could very well be a forced dichotomy of the worst kind. Many Americans who previously thought of themselves as politically moderate, or perhaps did not care much for politics at all, will take one look at mass riots by Anarcho-Communists, and instinctively find themselves shifting further to the political Right out of sheer opposition to dangerous radicals, and out of desperation.

While this shift could also very well give broader popular support to President Trump, it could also result in more far-right rhetoric becoming normalized in order to balance out the Left’s attempted normalization of far-left rhetoric and violence. If history is any indication, this forced dichotomy between two political extremes will not bode well for the future of our country. 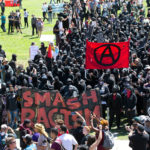