Some of the top culprits in the Obamagate scandal, mostly consisting of the intelligence agency heads, have reached a whole new level of guilt for their involvement. The only question is: Are they so confident that they will not face crimes that they have become as arrogant as possible, or are they worried that they just might face justice and thus are turning on each other?

James Clapper’s most recent interview with CNN could be either one, but his statements remain the same: He explicitly said that he and others were ordered to spy on Donald Trump’s campaign by the Commander-in-Chief at the time, Barack Hussein Obama.

This confirms what we have long suspected: That this scandal does indeed go all the way to the top of the Obama Administration. And with that being the case, just about anyone could be guilty. 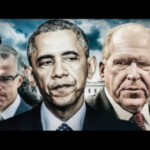