For the last four months, Venezuela has dominated the news cycle as the stage for the latest major international crisis, one that has drawn clear lines between most of the world’s major nations. Knowing who the actors are, and which countries are backing them, can help one to understand why this crisis is so important to America, and indeed, to the whole world.

The specter hanging over the entirety of the recent chaos is the late dictator Hugo Chavez, who was first elected in 1998. He was “re-elected” three more times, with the most recent being 2012.

However, before he could be sworn in for what would have been his fifth term, he died of cancer and left behind a country in chaos; his government’s kleptocratic control over the economy and Venezuela’s incredibly rich natural resources led to widespread poverty and food shortages, while corruption and violence skyrocketed.
It was against this backdrop that Chavez’s vice president, Nicolas Maduro, was elected in a special election in 2013. Maduro did little to combat the problems that started under Chavez, including food shortages and inflation, which led to continued mass poverty.

When the population’s outrage manifested in widespread protests in 2014, Maduro took steps to violently suppress protesters and, eventually, his political opponents. This resulted in the United Socialist Party – the party of Chavez and Maduro – losing in the 2015 parliamentary elections to the opposition coalition. Maduro tried to solidify his own power by stripping the legislature – known as the National Assembly – of its powers, and then calling for a premature presidential election in 2018, which many observers around the world widely consider to have been rigged in his favor.

This fraudulent election was the final straw for Maduro’s opposition, and the President of the National Assembly Juan Guaido, citing Article 233 of the Venezuelan Constitution, declared himself the interim President of Venezuela on January 23, 2019.

Since the status of the presidency was thus disputed, most of the world’s other nations have taken a side. Guaido is supported by the United States, Canada, Israel, Japan, Australia, virtually all of Europe, and most of South America. Maduro’s illegitimate regime is supported by China, Russia, Cuba, North Korea, Iran, Syria, and Turkey, among others. (A handful of countries have remained neutral, including India, Mexico, Switzerland, New Zealand, and the Vatican.)

This division makes clear just what the crisis in Venezuela actually means. Naturally, Maduro’s failing regime has become a cause celebre for the last few nations that still have communist and dictatorial governments, particularly China, Cuba, and North Korea. As one of the world’s most prominent socialist regimes collapses in upon itself and is slowly – but surely – ushered out of power, the remaining countries still wedded to Marxism are doing what they can to prop up this walking corpse of a regime. This has proven especially important for proving the true colors of two of the world’s most destabilizing powers, China and Russia, as they back the murderous Maduro.

Meanwhile, the free world as we know it has lined up almost in lock-step behind Guaido, under the leadership of President Donald J. Trump. With a passion for freedom and an abhorrence of communism not seen since Ronald Reagan, President Trump has taken increasingly larger and more effective steps to punish the Maduro regime, including heavy economic sanctions and an ongoing travel ban, among other measures. He has also criticized the Cuban regime for sending troops to Venezuela to aid Maduro’s forces, threatening a total embargo in retaliation if they do not withdraw their forces from the country.

Most recently, Vice President Pence openly supported Guaido’s call in late April for an uprising of the civilian population against the Maduro regime, resulting in Maduro accusing the U.S. of staging a “coup” in the country. Guaido’s actions resulted in even more widespread protests, as well as a rise in the violent suppression of unarmed protesters by the military forces who are still loyal to Maduro.

As the violence and chaos continues with the whole world watching, it has become clear that Venezuela is the single most significant conflict involving a communist regime in the post-Cold War era. Few nations remain that still proudly fly under the red banner of the same evil ideology that killed over 100 million over the course of that terrible half-century. But the ones that do are no less responsible for human rights violations on their watch, and serve as ongoing testaments to the utter failure of both Communism and Socialism. Not only does this have ramifications for dividing most of the world’s leading nations into two clear camps, but should also affect the ongoing debate over socialism right here within America’s borders.

As armored military vehicles plow through crowds of innocent, freedom-loving protesters on the streets of Venezuela, major national figures in the United States continue to call for more socialism. Whether it’s the geriatric Bernie Sanders or the clueless Alexandria Ocasio-Cortez, Socialism is being promoted without reservation by the Democratic Party’s growing far-left.

They make these appeals especially to young voters, who are often too young (or perhaps too indoctrinated) to remember the unprecedented violence, destruction, and death caused by socialism across the world during the second half of the 20th century. They try to make Socialism seem “compassionate” and “caring,” even though a little inconvenient thing called “history” – or just the latest news coverage of Venezuela – instantly proves otherwise.

And in calling for increased gun control measures, they claim that they would be reducing violence. They should ask the helpless Venezuelan civilians being murdered in the streets how well the banning of firearms has worked for them, and how violence has gone down since the right to own a gun was taken away from the country.

That is why all Americans should pay attention to Venezuela; to be reminded that socialism can, and will, destroy any country that it touches. 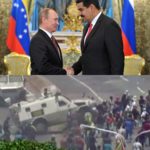 Venezuela: Why It Matters