Donald J. Trump is criticized over everything he does. Yet, he has done many things correctly. One of them was his recent decision to pull the 2,000 U.S. forces out of Syria. After deploying American forces to crush ISIS in Syria after it had taken nearly two-thirds of the country over), the president recognizes that we have won. As per American tradition, Trump knows that it’s time for U.S. forces to come home after having achieved a stunning victory, when his predecessor, Barack Obama, argued that ISIS would be a “generational threat” Trump defeated the Islamic State in less than 18 months with minimal force.

The commentariat doesn’t believe that Trump’s decision was a reflection of a firm grasp on strategic realities. Now that America has defeated its enemy, what more is there for the United States to do? Should we occupy and withstand a decade of endless insurgency the way that we did in Iraq and repeat the disastrous policies of the Bush and Obama years?

It’s fascinating to witness the change in elite opinion. Shortly after 9/11, when former President George W. Bush embarked upon his two Mideast wars in Afghanistan and Iraq, the elites in Washington were screaming that the country was entering into unnecessary quagmires. During the George W. Bush years, Michael Moore, Noam Chomsky, and the rest of the Left insisted that the GOP were a pack of war criminals out to engage in a neo-imperial crusade in the Middle East. In fact, the Leftists believed that the United States brought 9/11 on itself.

Meanwhile, during the Obama years, the same elite applauded as the 2009 recipient of the Nobel Peace Prize, President Barack Obama, bombed more Mideast countries than his predecessor ever bombed. Today, with the elite’s great bugaboo, Donald Trump in office, the same commentariat now insists that Trump is ruining American foreign policy for doing precisely what his predecessors were meant to do: win wars and bring our boys (and girls) home.

Well, which is it? Either they’re pro-war or antiwar.

The “expert” class argues that Trump is being inconsistent and exhibiting signs of dangerous instability with his foreign policy (and other) decisions. Yet, that’s not what most Americans see. What we “deplorables” see is that Trump is responding to changing conditions on the ground and tailoring his strategic decisions based on what’s best for America’s national interest.

In fact, it is the Left who exhibit signs of political schizophrenia: claiming to be antiwar yet castigating Trump when he ends a conflict. For Trump’s opponents everything is relative: if he is antiwar, they become more hawkish than Dick Cheney on a quail hunt. Trump could heal the sick and bring back the dead and the Left would argue that he’s threatening the planet with overpopulation. Trump Derangement Syndrome is real.

Trump just saved American foreign policy by drawing down in Syria. Imagine if George W. Bush had opted to do in Iraq back in September of 2003 what Trump just did in Syria. Just when one thought it couldn’t get any stranger, the elites have been trying to make Trump look bad with specious claims that the president was “backtracking” away from his initial plans to pull U.S. forces out of Syria. In fact, Trump is merely engaged in a responsible, phased withdrawal (exactly as his critics urged). And he’s keeping his promise to the American people

America’s endless wars in the Mideast have been a boon for American rivals: the more limited resources that Washington committed to the region over a longer period of time, the more that Russia, China, and others were able to enhance their own interests at America’s expense.

With Trump’s drawdown from Syria, the mess is now left for these other countries to clean up should they want to. If Russia, Iran, Turkey, and even China want to own that mess, they can have it. The United States has had enough. Syria isn’t worth the bones of a single American G.I.–especially now that the physical caliphate of ISIS is destroyed.

The real reason the elite hate Trump is because he is, in fact, winning. And, with each victory that Trump achieves, it is a direct blow to the monopoly on political and economic power that the globalist elite have enjoyed for decades. That’s the real game in the Syria drawdown, and that’s why we must continue championing the #MAGA agenda at all costs. 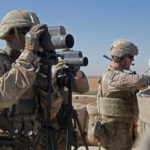