Barack Obama was a man driven almost entirely by his ego and extreme leftist ideology, determined above all else to solidify his “legacy,” regardless of whatever that legacy would mean for America.

As such, he never let such inconveniences as the rule of law, separation of powers, checks and balances, or that annoying document known as the Constitution stand in his way. From executive order to unilateral military action, he set out to cement himself in history, in the hopes that his name would be remembered forever.

But, just as so many of his policies were enacted solely by executive power, those same policies were just as easily eliminated the same way.

President Trump ran his campaign on many messages, from America First, to revived pride in our nation, to challenging the deeply-entrenched elites of the Swamp. But one of his most significant promises was to undo as much of the Obama presidency as possible; and he has indeed delivered on that promise.

Here is a comprehensive list of the Top 10 Obama-era policies that President Trump has directly overturned.

The Mexico City Policy is the federal rule that denies federal funding to any non-governmental organizations (NGOs) that provide abortions in other countries. This has become a political football that, much like a pendulum, swings back and forth with each administration: Enacted by Ronald Reagan, it was then rescinded by Bill Clinton, reinstated by George W. Bush, then repealed again by Obama.

President Trump, as part of his broader commitment to fighting for the right to life, re-implemented the policy, just three days after his Inauguration. He then expanded the policy even further, banning the use of federal dollars for any form of healthcare that provides abortion. While the original policy saw such groups defunded of about $600 million, the expanded version cut nearly $9 billion worldwide.

Obama was determined to see his “social justice” agenda invade every institution in the country, and the military was no exception. Despite the fact that transgenderism is classified as a psychiatric condition known as “gender dysphoria,” Obama ordered the Pentagon to lift the ban on transgenders serving in the United States military. Subsequently, President Trump signed two presidential memoranda reinstating the ban, with a third order directly from the Department of Defense solidifying the ban. The ban faced legal challenges, but was ultimately upheld by the Supreme Court.

One of Obama’s early domestic policies was the Dodd-Frank Wall Street Reform and Consumer Protection Act, signed as a response to the 2007-2008 financial crisis. The bill, named for Democratic Representative Barney Frank and Democratic Senator Christopher Dodd, enacted a whole new wave of regulations on the financial sector, including giving more regulatory power to the Federal Reserve and creating the Consumer Financial Protection Bureau.

The CFPB, which was the brainchild of socialist Senator Elizabeth Warren, was an example of egregious government overreach with steep regulations on American banks. While claiming to be for the purpose of regulating financial institutions to avoid corrupt business practices, all it did was strangle the efficiency of medium-sized and smaller banks, allowing the biggest banks to solidify their own strength in the industry.

Subsequently, one major legislative accomplishment of the Trump Administration that has gone largely unnoticed is the Economic Growth, Regulatory Relief and Consumer Protection Act, passed in May of 2018. Surprisingly, it garnered bipartisan support, as 33 Democrats in the House voted with the Republicans in favor of the bill. In the Senate, 17 Democrats sided with the Republicans. President Trump then signed the bill, easing many restrictions on numerous smaller and medium-sized banks.

While the Iran Nuclear Deal received the majority of media coverage as the definitive bad deal between the Obama Administration and a rogue tyrannical government, the attempt at normalizing relations with Cuba was a similar blight on American foreign policy under the watch of the 44th President.

Without any effort at curbing Cuba’s human rights violations or encouraging them to shift away from a Communist form of government, Obama announced a resumption of official American relations with Cuba, including the opening of our embassy in Havana and lifting numerous sanctions on the dictatorial regime.

But President Trump quickly put a stop to that, quickly reinstating most of the sanctions that Obama lifted in his first year in office. In 2019, he enacted even stricter sanctions, including a ban on private vessels traveling to Cuba from the United States.

Two of Obama’s most blatantly unconstitutional actions as President were his executive orders on amnesty for illegal aliens: Deferred Action for Parents of Americans, and Deferred Action for Childhood Arrivals. When Congress failed to pass amnesty in a bill called the DREAM Act, Obama took the matter into his own hands and implemented the law anyway by executive fiat.

The orders faced legal challenges even before the 2016 election, with the Supreme Court coming to a deadlocked 4-4 ruling on DAPA that ultimately left a lower court’s ruling in place declaring the policy unconstitutional. This made it all the easier for President Trump to rescind DAPA upon taking office.

The similar repeal of DACA faced more legal opposition than the repeal of DAPA, but another lower court ultimately ruled that DACA is most likely unconstitutional as well, sealing the law’s fate and sending another of Obama’s illegitimate “accomplishments” into the trash bin of history.

By far Obama’s most deadly failure, the rush to pull American forces out of Iraq in 2011, purely to fulfill a campaign promise, ultimately led to the power vacuum that allowed for the rise of ISIS. At its peak, ISIS appeared on the verge of taking over Iraq, which would have put them in a position to carry out even more mass terrorist attacks around the world, like the Paris massacre of November 2015.

When President Trump came into office, he made a very simple, yet powerful, move: He gave much greater autonomy and decision-making powers to the generals and military officials who were directly involved with the fight against ISIS. As a result, American efforts to beat back the ISIS threat and re-liberate Iraq were greatly expedited, and the physical caliphate of ISIS was ultimately eliminated within President Trump’s first two years as Commander-in-Chief.

But the most memorable, in terms of a direct refutation of Obama’s legacy, undoubtedly came in the form of his very first nominee for the United States Supreme Court. After the Republican Senate successfully blocked Obama’s nomination of Merrick Garland to succeed the late Justice Antonin Scalia, Trump quickly filled the vacancy with an originalist who would have made Scalia proud: Justice Neil Gorsuch. This directly set the stage for the new conservative majority on the nation’s highest court, solidified with the eventual confirmation of Justice Brett Kavanaugh to succeed the retiring Anthony Kennedy, after a brutal and despicable attempt by the Democrats to “Bork” his nomination.

No other bad international deal in history rivals the Paris Climate Accord in terms of its sheer scale, with nearly 200 nations signing on. The ultimate token act on the Left’s boogeyman of “global warming,” the Paris Accord was set to drain the United States of up to $2 trillion per year, in the ultimate example of wasteful government spending.

President Trump not only withdrew from the agreement, but continued to defy the dogma of global warming by enacting multiple policies that greatly increased America’s natural gas and energy production, eventually turning the U.S. into a net exporter of energy and establishing our energy independence. Arguably no other action by President Trump better represents his commitment to the American people rather than to the globalist elite. As the President famously remarked: “I was elected to represent the citizens of Pittsburgh, not Paris.”

In a most egregious act blatantly appeasing a murderous authoritarian regime, Obama signed a deal that lifted most sanctions on the Iranian government, paving the way for the country to more easily assemble a nuclear weapon. Obama even rewarded the murderous mullahs as part of the deal, giving them well over $100 billion. Even despite the protests of our closest Middle Eastern ally Israel, Obama and his fellow elitists in the European Union happily facilitated the worst state-sponsor of global terrorism.

President Trump quickly put an end to Iran’s newfound gravy train, first refusing to certify the deal in October of 2017. Then, in May of 2018, he formally withdrew the United States from the deal. Like many other rogue nations, he then put in place sweeping new sanctions intent on crippling the financial assets of the government’s highest-ranking officials, putting all the pressure back on the mullahs to end their quest for nuclear weapons.

It only makes sense that the top entry on our list is President Trump’s the fatal blow to what is widely considered Obama’s “signature achievement.” Obamacare was a disaster from the start, passed by Democrats who didn’t even read it, and with the explicit intention of moving the American healthcare system towards socialized, government-run medicine. In the first major attempt to strike down the unconstitutional law, Chief Justice John Roberts betrayed the American people by upholding the law under the provisions of taxation instead of the commerce clause.

Despite campaigning on repeal for 8 years, the Republican Party in Congress failed to pass a full repeal of the law after the betrayal of John McCain. But fortunately, the party did not fully give up on at least some attempt at repeal when their next significant legislative goal came up: Tax cuts.

Primarily through the masterful legislative maneuvers of Senator Tom Cotton, the Senate GOP was able to work a repeal of Obamacare’s individual mandate into their version of the Trump tax cut bill. As such, when the bill was signed into law by the President, the individual mandate was repealed, and the central unconstitutional pillar of the entire disastrous healthcare law was torn down.

Obamacare has been limping along on life support ever since, with additional judicial rulings that it is now entirely unconstitutional, tax clause or no tax clause, without the individual mandate. This time, it seems set up for a sure defeat when it inevitably goes back to the Supreme Court.

In the end, it was President Obama’s utter disregard for the Constitution – remember his “I have a pen, I have a phone” remark – that was his undoing. Now we have a President who is building a legacy for all Americans. 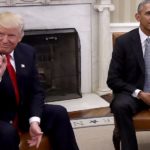