President Donald J. Trump has found himself attacked on all sides, due to his recent decision to end the highly unpopular government shutdown. Naturally, the “Fake News” Industrial Complex and their “Never Trump” allies piled on the president for having “caved” to Nancy Pelosi and the Congressional Democrats. What few understand is that the president did not surrender to the Democrats at all. Fact is, the government shutdown was unpopular; the American people were blaming the president for the impasse in Washington, D.C., and most Americans want the government reopened.

Similarly, though, most Americans also wanted stronger border control and immigration policies. Recognizing that he had gone as far as he could with the government shutdown, the president gave himself a three-week reprieve. He changed the narrative: no longer was he the man who had shutdown the government, but he had become the leader who reopened the government. Yes, he will take some hits for not having acquired funding for the border wall. But, he did not abandon the wall. He told Congress that they have until February 15 to make a deal with him. Should they yet again fail to make a deal, the president made it clear that he reserves the right to shutdown the federal government yet again. Trump Administration spokespeople have already indicated that the president will shutdown the government again if no movement is made in negotiating with Congress over funding the wall.

President Trump, however, did endure a temporary tactical setback. However, the overall strategy of refusing to abandon border security, as so many of Trump’s predecessors have, is working. Privately, Democrats have conceded that even their constituents favor stronger immigration enforcement. Even moderate Republican leaders, such as Senator Lindsey Graham (R-SC), have insisted that Democrats seriously negotiate with Republicans to fund the border wall.

What had happened during the government shutdown was that the Democrats and their allies in the “Fake News” media overtook President Trump in the battle of perceptions. While Trump began in a strong position–tethering the government shutdown to border wall funding–Trump was undermined the longer the shutdown continued. The narrative slipped away from getting a border wall and became about how “mean” Trump and the Republicans were for effectively holding (non-essential) federal workers’ paychecks hostage to their political agenda. As this perception became dominant in the minds of many Americans, the president and the GOP risked losing the political capital needed to secure funding for the border wall.

In football parlance, the president punted. In a tight game, when a team cannot get advantageous field position, it is often necessary to punt the ball and bury it back in the rival teams’ side of the field. This buys your team time to further wear down the other side and it implies that you will likely get better field position to make another drive for the end zone. For fans, punting the ball is nowhere near as exciting or fulfilling as running the ball down the throat of the other team.

Yet, it is a strategically sound move given the circumstances. Fact is, the Democrats do not have the unity or power in government to totally stop the president. They can only slow him down. Had the president insisted on maintaining the government shutdown, as popular opinion went to the other side, he risked losing his own party, most of whom belong to the Congressional “Coward Caucus.” By ending the government shutdown for three weeks, the president keeps his fractious party together and the Democrats have no excuse not to at least engage in meaningful negotiations with the Republicans about funding the wall.

Come February 15, if the negotiations fail, the president can yet again shut the government down. He can also declare a state of emergency on the border and move funds already appropriated for either immigration enforcement and/or Defense Department contingency operations. Of course, the declaration of emergency comes with its own problems–notably, it will invite a direct legal challenge to the president’s authority. It is more than likely that the president would win such a court challenge, just as he did with his so-called “travel ban” (and just as he appears poised to do so with his decision to ban transgendered individuals from serving in the military). Yet, court battles take time. And, time is not on America’s side when it comes to stopping illegal immigration (this is why the Democrats prefer court showdowns, the longer it takes for a resolution, the better political position the Democratic Party will be in). The matter of time is also why the president has been hesitant to declare a state of emergency on the border.

The Left has three weeks to see reason. If they don’t, the president will achieve his goals, and those on the Right who spent the last several days castigating the president for his supposed “surrender” to the Left will have been proven wrong again. 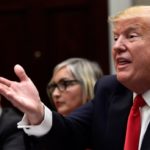 Three Weeks Is Not a Surrender