We can breathe a collective sigh of relief for now, as the Rule of Law has prevailed.

Despite the Democrats’ best efforts to steal the election for North Carolina’s 9th congressional district – including sabotaging out the original Republican victor in the 2018 election – they have failed once again, and even harder than before.

Although the Democrats did succeed in stealing this seat from the man who had originally won it – pastor Mark Harris in 2018 – the seat that has been represented by Republicans for over 50 years will remain in Republican hands. Now Congressman-elect Dan Bishop heads off to Washington to support President Donald Trump and his MAGA agenda.

But it was not enough to simply defeat the Democrats. There are numerous important signs that this election truly was a “bellwether“ for 2020. And if that’s the case, then we should be very optimistic about next year.

3. A Rejection of the Left’s Radicalism – and Faux Moderation

President Trump made it very clear in his rally for Bishop the night before the election: A vote for the Democrat, Dan McCready, was a vote for Nancy Pelosi and far-left policies such as sanctuary cities and open borders.

It is also important to note a key difference between the circumstances surrounding the 2018 election and this election: In 2018, the bogus Mueller probe was still ongoing, and the Democrats were still endlessly touting the “Russian collusion” talking point. By the time this election took place, that entire conspiracy has long since been dead and buried.

Now the Democrats’ talks of impeachment only come across as more desperate than ever before, and the voters of North Carolina clearly are not in favor of a Democratic Party that is bent purely on obstructing the President just to gain partisan points.

But most importantly, voters of the 9th District of North Carolina did not fall for a trick that many Democrats used in 2018: Parading around as “moderates” who insisted that they were not as radical as Nancy Pelosi. After eight months of an even more radicalized Democratic Party that continues marching as far to the Left as possible, it is clear that Democrats like the nominee in this race, Dan McCready, are no longer capable of passing themselves off as “moderates” when it is obvious how far-left the party has truly become.

2. A Significant Improvement from 2018

Congressman-elect Bishop not only won this seat, but he actually improved from the previous Republican performance in this same seat in 2018.

Last year, Harris barely won the seat by just over 900 votes, and won only two of the district’s eight counties.

In this election, Bishop won by over 4,000 votes and actually flipped two counties that had gone blue last year, while outperforming Harris in the two stronghold counties and even closing the gap in other counties that still ultimately went for the Democrat.

This improvement could be for a number of reasons, such as an increased motivation to reject the Democrats’ radicalism, as mentioned above. But in the end, there is one major reason for the district’s overall rightward shift, and that is exactly why the most important takeaway is this:

1. President Trump was the true winner

As the President pointed out on Twitter, Dan Bishop was down against McCready by as much as 17% just three weeks ago. And yet with one rally the night before, President Trump instantly drove up voter enthusiasm and ultimately carried Bishop over the finish line.

All in all, this was a hard-fought and well-earned victory. But there mustn’t be too much time for resting, because the greater fight still looms ahead. But if we keep up the effort just as we did in this election, then we can expect a similar result next year, which will leave the Left every bit as stunned as they were last night. 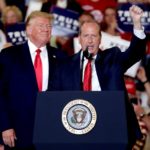 Three Takeaways from the Victory in North Carolina