If former Vice President Joe Biden’s campaign announcement is any indication, the Left – with the help of the mainstream media – is tripling down on one of the biggest lies being pushed in America today: The notion that there is a rise in white supremacist terrorism in our country.

This could not possibly be further from the truth. The vast majority of alleged instances of domestic terrorism by white supremacists are exploited by the media, for the explicit purpose of portraying them as a greater threat than Islamic terrorism, which is still very much as dangerous and globally widespread as ever.

One of the primary sources cited for the fake news claim is the left-wing Anti-Defamation League, which issued a report claiming that white supremacists “and other far-right extremists” were responsible for 59% of deaths in terror attacks in the United States in the year 2017. They noticeably keep their definition of “far-right” deliberately vague, later admitting that deaths caused exclusively by white supremacists made up just 52% (18 out of 34) of 2017’s terrorist fatalities.

The report added that this made 2017 the fifth-deadliest year of terrorist violence in the United States since 1970 – yet it isn’t difficult to guess the ideology responsible for the other four years that outrank 2017, which is probably why the ADL deliberately ignores the vast preponderance of jihadi attacks.

The report also claims, without adding any evidence, that white supremacists being the top cause of terror-related deaths “has typically been the case in most years.” This is actually disputed by the National Consortium for the Study of Terrorism and Responses to Terrorism (START) at the University of Maryland, which reports that left-wing terrorism overwhelmingly outnumbered right-wing terrorism in the 1970’s (65% to 15%) and the 2000’s (60% to 5%).

Even then, the ADL report is forced to sheepishly admit that the single deadliest terror attack of 2017 was still committed by an Islamic extremist: The New York City truck-ramming attack, which killed eight people and wounded eleven. It’s no wonder this “disruptive” fact is saved for the last point in a bulleted list.

All this comes down to is simple cherry-picking of a select few cases, one particular year, and only attacks that were fully carried out, in order to boost a narrative. When taking a step back and looking at the broader picture, particularly the wider range of terrorist conspiracies and unsuccessful attacks, this idea of white supremacist terrorism is utterly debunked by comparison to Islamic terrorism.

In a comprehensive report by the decidedly liberal think tank New America, the full scale of Islamic extremism in the United States is enumerated, confirming that Islamic terrorism is still far and away the top threat to our country. The report states that since 9/11, there have been 469 total charges of terrorism within the country. Of those 469, 437 perpetrators were Muslims, while a paltry 32 were non-Muslims. While the ADL report propagandizes about the alleged increase in right-wing terrorism due to the increasing influence of the alt-right on the Internet, New America’s report shows that Islamic indoctrination online has been consistently growing since 2009, peaking in the year 2015 when a staggering 90% of cases that year (80 overall) were directly influenced by the Internet!

In the final page of the New America report, the total number of casualties – deaths and injuries – caused by terrorism are compared and contrasted based on ideology. The total for Islamic extremism stands at 104 deaths and 302 injuries, while the cumulative total for “far-right wing” terrorism accounts for 87 deaths and 80 injuries. However, like with the ADL report, “far-right” is used as a blanket term to account for numerous motivations that aren’t even necessarily right-wing, including sundry anti-government incidents such as attacks on police officers. When these are discounted, and the casualties of only the explicitly white supremacist attacks are tabulated, the total decreases to 61 deaths and 43 injuries.

Liz Shield of American Greatness further expands on how even these depleted numbers are still exaggerated based on factually inaccurate reporting on alleged right-wing terrorism, and the discrepancy between the culprits’ affiliations and the attacks’ actual intent. For this, Shield turns to one of START’s senior researchers, Michael Jensen, who says that it is not the number of right-wing terrorist attacks that has increased – indeed, it has mostly remained stagnant since the 1970’s – but the reporting of such incidents that has increased.

Shield subsequently points out that some cases are falsely reported as “white supremacist” attacks when there’s no proof that they are. One instance is a shooting at a school in Aztec, New Mexico, where a student shot and killed two other students before committing suicide. Despite multiple media outlets – including AP, Newsweek, and the LA Times – claiming that the shooter was motivated by white supremacy, the local police repeatedly rejected this claim. Yet this incident, along with many others, is still listed by the Southern Poverty Law Center (itself a hate group) as white supremacist violence, and subsequently parroted as such by the media, thus creating a self-confirming cycle of counter-factual reporting.

Shield also highlights how this discrepancy is acknowledged by one other prominent source, the U.S. Extremist Crime Database, which differentiates between a terrorists’ personal affiliations and the explicit intent of an act of violence. In other words, if someone with alleged ties to neo-Nazi or other white supremacist groups commits an act of violence without necessarily or explicitly intending to promote their racist ideology, then that attack may very well not technically be considered an act of white supremacist terrorism.

And yet the media and so-called “experts,” as Shield ponders, continue to make their own “magical” judgments on what the perpetrators intended to do, and falsely label certain acts of violence as right-wing or white supremacist without requisite evidence. The most recent Global Terrorism Index report, published by the Institute for Economics and Peace in December of 2018, claimed that the total of deaths caused by right-wing extremists in North America between 2013 and 2017 stood at 66.

However, 59 of these deaths come from the 2017 Las Vegas shooting. Yes, you read that right; this report declared the 2017 Las Vegas shooting to be an example of right-wing terrorism, despite the fact that even the FBI has declared that they were totally unable to determine the gunman’s motive. So when that single incident is removed from the equation, the total number of fatalities from alleged right-wing terrorism in that four-year time span drops to just 7.

But this white supremacist narrative is truly demolished if one steps further back, and looks at the global impact of Islamic terrorism. For all the ADL’s bemoaning of the alleged rise of right-wing terrorism in 2017, the 18 deaths at the hands of white supremacists in the United States pales in comparison to the global body count of jihadism. START’s own report on this confirms over 26,000 deaths (over 18,000 of which were civilians, the remaining 8,000 being perpetrators).

Breaking down this data based on the culprits, the overwhelming majority comes from Islamic terrorist groups, including ISIS, the Taliban, Al-Shabab, Boko Haram, and similar groups. These groups made up over 19,000 of the total fatalities worldwide, while the second-highest total, interestingly, goes to Communist groups in such countries as India and the Philippines.

The real terrorist threat to America – and the world – remains Islamist and jihadist terrorism. 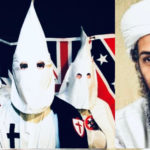 The Truth About Right-Wing Terrorism