In 2015, Bruce Jenner shocked the world with the infamous “Call Me Caitlyn” Vanity Fair cover. Many Americans were still reeling after the Obergefell V. Hodges decision legalized same-sex marriage one month earlier, and now here was one of the biggest track stars of a generation deciding that he was a “woman.”

To anybody unfamiliar with the roots of transgenderism, it seemed like the most ridiculous idea imaginable. Anyone can see from the basics of biology and cultural norms dating back thousands of years that there are only two genders and one’s biological sex defines their gender. Arguing otherwise would require you to enter a space so opposed to common sense and logic that no right thinking person would even consider it.

But what if that’s exactly the point? What if the whole reason for radical gender ideology is to force you to question even the most basic truths. The more illogical and ridiculous the claim, the easier it is to compromise in seemingly “moderate” areas. If activists regularly argue that several hundred genders exist and that someone can freely switch between those genders throughout the course of the day, then what’s so crazy about a biological male who likes to dress as a woman?

For generations, queer activism in the United States centered on “marriage equality.” While an underground of gay activists existed in most urban centers in the United States, LGBTQ activism really began in 1969 after the Stonewall Riots. After a spontaneous late-night police raid on the Stonewall Inn in New York City, demonstrations rocked Manhattan and patrons of other gay and lesbian bars began fighting back against similar police operations and the riots radically raised the profile of the LGBTQ movement. This profile cemented itself after the election and murder of Harvey Milk in San Francisco, which gave the burgeoning movement a martyr. Then the AIDS crisis brought LGBTQ activism even further into the public consciousness.

In the twenty-first century, activists focused on influencing culture, depicting gay relationships as bourgeois and palatable in film and television. Popular gay anthems reached the top of the Billboard Top 100, shows like Modern Family depicted a healthy gay “marriage,” and politicians began to “evolve” on the issue in droves. The change in public opinion was swift. In 2004, only about 34 percent of Americans supported gay marriage, and by 2016 that number reached 55 percent. This culminated in 2015 with the passage of Obergefell, with Justice Kennedy penning one of the most puzzling majority opinions in Supreme Court history and cementing same-sex unions in law.

But activists at the Human Rights Campaign and other allied organizations took Saul Alinsky’s advice to heart and didn’t stop there. Without skipping a beat they moved on to their next prize: normalizing transgenderism.

Queer Theory, the collection of ideas that drive transgender activism, owes its foundations to one man: philosopher and known pedophile Michel Foucault. Foucault argued that power, especially as it relates to sex, revolves around language and scientific truth. In his foundational work “History of Sexuality,” Foucault claims that the nineteenth century revolutionized the way that people thought about sex by catagorizing it. Sex was discussed so little in scientific circles that a vocabulary defining someone sexually did not really exist. For example, before the nineteenth century one could commit homosexual acts but one was not a “homosexual.”

By creating these categories science became the foundation for sexuality and by extension restricted it. For Foucault, the ideas perpetuated by science and language keep those with alternative sexual lifestyles (including pederasty) oppressed because they are inescapable. When something as simple as the words that we use enforce social norms it leaves very little room for breaking them. Society uses knowledge and concepts like truth to enshrine certain ideas into vocabulary and every person cements this power everytime they use a word like “normal.” Thus, the only way to fight these words is by directly resisting them.

Foucault’s more radical ideological  progeny took these ideas and developed Queer Theory in its current form. University of Michigan professor Gayle Rubin took Foucault’s distrust for science to the logical extreme in her essay “Thinking Sex,” in which she argues that in order to reach true liberation the activist must completely divorce sex from biology. As long as we believe in concepts like “libido” then we define sex in a certain way, therefore destroying the freedom from language the radical Queer Theroist advocates for.

The most important Queer Theorist for understanding the current political moment, however, is Judith Butler.

Butler argues that that gender and sex are completely distinct from one another, claiming that a correlation exists between the two simply because of “gender perfromitivity.” Simply because of the way humans speak and act, we force otherwise genderfluid people into gender specific lifestyles. For Butler, gender is a set of actions taken by a person and has nothing to do with what the person actually is. This force is so strong that there is no way for someone to escape it, and even defining themselves in opposition to it plays into the structure itself. And so one must participate in “queering” or “genderfucking,” the act of performing in a manner so opposed to the status quo that it destabilizes the system. Only by performing in drag, mutilating young girls and boys with gender reassignment surgery, and engaging in public displays of “queerness” can the system be brought down.

By bastardizing the norms of sexuality, you cause the average person to question their own views of sexuality and become open to the belief that everything is a social construct. Butler and her fellow radicals want the world to be incomprehensible. Only by forsaking science and all decency can we make the average person throw up their hands and give up trying to defend positions that they hold dear. If nothing makes sense, why bother caring? Butler goes so far as to claim that biological sex may not even exist, and that by believing in a concept like “woman” you participate in the oppression of the human race.

Does this make any sense? No. But that’s the point.

By advocating that biological males should participate in women’s sports they muddy the water. The transgender propogadists have as there goal to make you think that these questions are actually up for debate, that there is an argument to be had about whether or not sex and gender are related. Once you cede that ground you open yourself up to other questions that might appear easier to swallow. If people are trying to force women to share a locker room with a man, then you might just be more willing to accept seemingly “normalized” homosexual relationships.

“At least they keep to themselves,” you tell yourself. “What’s the harm?”

The harm is that we’ll be saying the same thing about women becoming “men” in five years.

As the goal posts continue to move, and the discourse becomes more and more surreal, we will find ourselves accenting to ideas we would have thought absurd just a few years ago. And so every time an activist claims that biological sex does not exist, that biology itself is a tool of oppression and should be ignored, they move the needle further towards meaninglessness and their ultimate goal: the denial of objective truth.

So don’t argue. Don’t give any ground. Calmly but firmly say what you know to be true. Educate yourself by reading books like Ryan T. Anderson’s “When Harry Became Sally,” Abigial Shrier’s “Irreversible Damage,” Robert Reilly’s “Making Gay OK,” and James Lindsay’s “Cynical Theories.” Yes some people are attracted to the opposite sex, yes sometimes people are born with both male and female genetalia, yes people struggle sometimes with gender disphoria, but that does not mean we should let radical gender ideology tear down every vestage of morality, until even the words ‘man’ and ‘woman’ are meaningless. 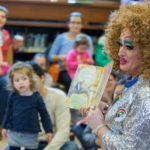