With the Democrats, the Deep State, the FakeNews Industrial Complex, the globalists, and even some so-called “Republicans” fighting against the President every single day, it’s easy to lose track of the overall goal and feel as if MAGA-believers are up against insurmountable odds.

But just as the President fights for us day and night, we mustn’t forget that the President does have friends in Congress, and elsewhere in the country. The few elected officials who do stand with the President, support his agenda, and fight right alongside him against the forces of the Left should be acknowledged for their efforts. And that is why we here at America First have compiled our very own list honoring these patriots.

Here are the Top 20 Most Pro-MAGA politicians in the country.

One final note: The purpose of this list is to give you hope, by reminding you that there are true warriors in elected office today, fighting the good fight every single day, standing between the American people and our enemies on the Left.

However, even though the election of President Trump has opened the door for other populist and nationalist figures to rise alongside him, the fact remains that this list is only 20 names long. There are some names that were not included, even though they could very well go on this list. But at the end of the day, out of the 199 Republicans in the House of Representatives, only 11 are listed; out of the 53 Republicans in the Senate, only 6 are on this list; and out of 27 Republican governors, there are but 2 on this list. These figures are tragic, an indictment of the modern GOP.

There are plenty of Republicans in both houses, and in states all around the country, who still oppose the President’s MAGA agenda and will voluntarily sit out the culture war when the going gets tough. We should never stop until we can guarantee that virtually all elected Republicans can be comfortably called “pro-MAGA.” 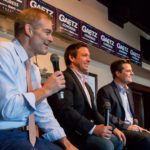 The Top 20 Most Pro-MAGA Politicians in America