The Democratic Party used to be the party of Harry S. Truman, the man who led the United States–against the wishes of America’s foreign policy elite–in recognizing the Jewish state of Israel in 1948. After that, the Democrats were the unabashed party of preference for most Americans of Jewish heritage.

But the party is no longer a friend to the members of the Jewish community in America.

In 1988, the Democratic Party came perilously close to nominating the rabidly anti-Semitic Jesse Jackson – who likely would have become the Democratic Party’s presidential nominee that year – had it not been for the chicanery of the then Democratic Party bosses who conspired to prevent Jackson’s nomination through the use of Super-Delegates, in much the same way that Hillary Clinton rigged her nomination by the Party in 2016

Flash forward to today and the Democratic Party, the party of Harry S. Truman, now includes a cohort of recently elected members of the United States House of Representatives who, if not outright anti-Semites, and openly opposed to Israel, are vocally opposed to the core issues that so many Jewish-Americans care for.

Almost every newly elected Democrat politician is sympathetic the Boycott, Divest, and Sanction (BDS) movement against Israel. This movement began as a fringe political initiave that over time has gained traction with an increasing number of Democrats. Their goal is force a divorce between the United States and Israel and to ensure that Israel not only is unable to defend itself against repeated terrorist attacks from Palestine, but to force Israel to also abandon its present borders and return to the borders it had before the Six-Day War.

These Democrats argue that they want to see peaceful coexistence between Israel and Palestine and the only way to achieve this goal is to weaken Israel down diplomatically and economically. But, this is a falsehood. The intentions of these members had less to do with peace than with providing cover for institutional Anti-Semitism.

Simply take a look at the newest elected Democratic members of Congress and listen to  their own words. These are not neutral political actors who merely want to fairly arbitrate the ongoing Israeli-Palestinian conflict. These Democrats want to hurt Israel for defending itself because they hate Jewish people.

Take, for example, the newly elected Representative Ilhan Omar (D-MN) who came to the United States from Somalia as refugee more 20 years ago. During her recent successful campaign for office, Omar tweeted that, “Israel has hypnotized the world, may Allah awaken the people and help them see the evil doings of Israel.”

Her predecessor, Keith Ellison, who is now the attorney general for Minnesota (who was also up for the DNC chairmanship two years ago and is suspected of having physically abused his ex-girlfriend), said of Israel, “We can’t allow another country to treat us like we’re their ATM.” In doing so, Ellison channeled the common Anti-Semitic slur of Jewish people exploiting Gentiles for pecuniary reasons. To compound matters, Ellison repeated yet another anti-Semitic trope by insisting that Jewish-Americans had dual-loyalties (and therefore could not be trusted) when he added, “[Israel] has organized its Diaspora in America to do its bidding in America.”

Representative Alexandria Ocasio-Cortez (D-NY), the “new face” of the Democrat Party, during her unlikely candidacy for office in 2018, routinely referred to Israel’s “occupation” of various Palestinian territories, without once acknowledging the ongoing terrorism that Palestinians routinely visit upon innocent Israeli women, children, and men.

The most shocking new addition to the Democratic Party in Washington, D.C. is Palestinian-American, Representative Rashida Tlaib (D-MI), who “disappeared” Israel from her congressional office’s map of the World by placing a sign reading “PALESTINE” over the location where Israel should be.

Tlaib has also made several disturbing  comments to the press about her support for the BDS movement, before becoming embroiled in a twitter argument with Republican Senator Marco Rubio of Florida wherein she repeated the Jackson libel by questioning the loyalties of Americans of Jewish descent. Senator Rubio rightly called Tlaib out on her accusations of Jewish-Americans having dual-loyalty.

These Democrats are clearly not just anti-Israel. They are anti-Semitic.

More significantly, the Democratic Party has become the locus for the mainstreaming of Anti-Semitic sentiments in the United States today. Israel could do everything that radicals, such as Rashida Tlaib and Ilhan Omar want them to do, and it would not matter. Recently, Charlie Kirk of Turning Point USA was on the AMERICA First show where he remarked that the radicalism that has gripped America’s universities for the last 20 years is, unfortunately, beginning to filter out into wider American society. Virtually everything that Keith Ellison, Rashida Tlaib, Alexandria Ocasio-Cortez, and the other anti-Israeli and Anti-Semitic Democrats have said and believe regarding Israel is out of what’s taught on most college campuses. Thus, the anti-Semitic fervor currently gripping the Left is likely to proliferate to many more Americans and to filter throughout the wider culture.

The next time that a Leftist accuses Donald Trump, a man whose own daughter is Jewish and who has two beautiful Jewish grandchildren, remember that Rashida Tlaib lost the endorsement of the Progressive Jewish group, J-Street, when she openly advocated for the One-State Solution to the Israeli-Palestinian Conflict. This “solution” would see the Jewish population of Israel become a minority in its own land.

This from the party of Harry Truman.
AMERICA First is the newest nationally-syndicated radio show in the United States, part of the Salem Radio Network. The host, Sebastian Gorka PhD., served most recently as Deputy Assistant for Strategy to the President of the United States, Donald J. Trump, and is author of the New York Times bestselling book “Defeating Jihad.” His latest book is “Why We Fight: Defeating America’s Enemies – With No Apologies.” You can follow him on Twitter @SebGorka, on Facebook, and on Instagram @sebastian_gorka. AMERICA First is available on the iTunes podcast app, streams live at www.sebgorka.com, and is on YouTube. You can contact him here. 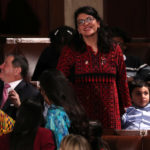 The Rise of Anti-Semitism within the Democratic Party