The election of Donald Trump as President of the United States was not an isolated incident. It was part of a much larger, global phenomenon that had been set in motion several years before, and has continued to grow ever since.

President Trump’s election, while arguably the most significant victory in this global “Patriot Spring” of national sovereignty reasserted in the West, was not the first and will not be the last of its kind. This movement arguably started with the original Brexit referendum in 2016, which preceded President Trump by a mere four months.

The first arc of this global wave has come full circle now with the most recent election in the United Kingdom, with Boris Johnson’s Conservative Party winning in a landslide after campaigning on finally delivering Brexit. This victory was more about the re-election of Brexit than anything else. Therefore, the results and the reactions to the results may just be a foreshadowing of what’s to come for our own elections in 2020, including how the GOP can win and how the Left will likely react when President Trump is re-elected as well.

A Decade of Success

The movement for national security can be traced as far back as 2010 with anti-Globalist right-wing parties ascending to power in the Western, starting with Viktor Orban in Hungary. This win would soon be followed by many others in countries across Europe in the the following years, including Poland, Austria, the Czech Republic, Italy, and the European Parliament elections of both 2014 and 2019. In all of these cases, heavily Eurosceptic parties were swept into power by commanding majorities, and have since reaffirmed their respective nations’ sovereignty with regards to immigration, trade, and other vital issues.

The movement also spread to countries outside Europe, from Shinzo Abe in Japan to Narendra Modi in India, who have both been elected and re-elected by massive landslides in recent years; the re-election of Modi and his Hindu nationalist Bharatiya Janata Party in 2019, with a record turnout of 67% out of 900 million eligible voters, was the largest election in world history.

Another massive upset was the election of Jair Bolsonaro as President of Brazil in 2018, despite overwhelming opposition from the elites and the media, as well as an assassination attempt that nearly took his life. Bolsonaro was elected as a proud nationalist who vowed to destroy socialism and drain the swamp, beating his left-wing opponent by over 10 million votes.

Yet other key election outside of Europe, which marked a massive upset in direct contradiction to all the polling and pundits’ predictions, was the Australian election of 2019. Despite all the polls consistently claiming for three straight years that Prime Minister Scott Morrison’s conservative bloc, known as the Liberal-National Party coalition, would lose to the left-wing Labor Party. However, by coordinating a vote preference agreement with two other right-wing parties that took advantage of Australia’s single transferable vote system, Morrison’s party stayed in power and even increased its seat share, marking the third consecutive victory for the right-wing coalition.

If there is one other consistent factor to these elections besides the rise of parties reasserting their national sovereignty, it is the historic decline of left-wing parties. Even in countries where the right-wing did not completely take power (such as the Netherlands, France, and Germany), major left-wing parties still suffered massive, sometimes historic losses of their own. Even in those cases where the populist parties couldn’t break into power, these elections marked a referendum on the declining popularity of establishment parties, especially on the Left.

Why the 2019 UK Election Matters

Over the course of the “Patriot Spring” there have been landslide elections and shocking upsets. But the most recent UK election is perhaps the most significant since the original Brexit referendum and President Trump’s victory in 2016, for a number of reasons.

First, it was indeed a landslide. Boris Johnson’s Tories ended up with a net gain of 67 seats, for their largest majority since Margaret Thatcher led the party to victory in 1987. But not only was it a landslide victory for the Right, it was also a landslide defeat for the Left, as Jeremy Corbyn’s anti-Semitic and socialist Labour Party suffered its worst defeat since 1935.

Second, this election was not only a shellacking for the Labour Party, but indeed, the total vanquishing of the Left in Great Britain as we know it. In several of the other key elections throughout Europe, including the Netherlands, France, and the Czech Republic, the major center-left parties would be decimated, while that left-wing vacuum would find itself filled by even more far-left parties, including outright socialists and even communists.

But that did not happen in the UK, as both Labour and the far-left Liberal Democrats sustained heavy losses, with the Liberal Democrats losing nearly half of their seats. The Liberal Democrats staked out an even more far-left position on Brexit than Labour, vowing to defy the will of the people and cancel Brexit altogether. Yet even with the remaining contingent of truly anti-Brexit voters in the UK, this message did not resonate at all and they were sent packing. It was a total defeat for the Left all across the board.

But third and most importantly, the election was a referendum on BREXIT in and of itself. Boris Johnson made it clear what this election was about: Delivering BREXIT and honoring the result of the referendum by voting for the Conservatives, or essentially seeking to cancel democracy by voting for Labour or the Liberal Democrats.

By a resounding majority, the British people spoke and reaffirmed their commitment to honoring the people’s will. As controversial as BREXIT has been, and as long as tumultuous three-year process has dragged on, the British people still want it to get done, no matter the cost. Despite the endless media smears and lies, the “resistance” from the Left, and the deliberate obstruction and delay by the elites during Theresa May’s premiership, the people are still determined to see their votes count and to make sure that they get exactly what they voted for three years ago.

To say that this has massive implications for next year’s presidential election would be an understatement. In the UK’s election, the choice was a clear one: National sovereignty and pride championed by a conservative party, or government tyranny and racial hatred promoted by a socialist party. The people not only made their choice, but they made their choice in a landslide.

Many of the same smear tactics used against Boris Johnson are currently being used against President Trump, from accusations of “racism” to claims that he doesn’t care for the poor. But in both cases, these could not be further from the truth. In the UK, the public made it clear how much they saw right through this charade with their votes. In the US, the people are making similar statements through the public opinion shifting further and further away from impeachment as the Democrats drag out this witch hunt.

If this is any indication, President Trump’s chances of re-election are increasing, not decreasing, as 2020 draws closer. Boris Johnson’s landslide victory should give all of President Trump’s supporters, and lovers of truly representative democracy all over the world, a renewed hope that the universal message of patriotism and freedom is not fading, but is indeed growing and shows no signs of stopping. 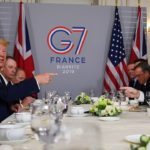 The Re-Election of Brexit, and the Global Sovereignty Movement