Ilhan Omar emigrated to the United States as a refugee fleeing from war-torn Somalia. She ended up in Minnesota where she worked for a time as a “nutrition educator.” From there, beginning around 2011, Omar was involved in a series of Progressive Democratic campaigns. Finally, after having billed herself up as a “Progressive Rising Star,” Omar ran for office as a state representative and won a seat in the State House for the local Democratic-Farm-Labor (DFL) ticket in 2016. Her supporters would have you believe that Omar is nothing more than an immigrant success story; someone who came to this country fleeing a failed state, like Somalia.

But, there is more to this story. Whatever Omar’s political ambitions, she has a long history of bizarre and radical behavior. First, she has exhibited a staggering level of anti-Semitism, even by Democratic standards. In 2012, she infamously tweeted out a grotesque statement about how Israel had “hypnotized the world.” As we’ve written about previously, claiming that Jewish people hold an undue, “hypnotic” influence over the world is a common anti-Semitic trope that has been perpetuated over the centuries by hateful people. Not satisfied with her initial excursion into anti-Semitism, Ilhan Omar then disseminated a tweet after she became a member of the United States House of Representatives, accusing Senator Lindsey Graham (R-SC) of having been put under “their [Israel’s] spell.”

Her twitter tirades didn’t stop there. Omar decided to post lies about the teenage boys from the Covington Catholic High School who were visiting Washington, D.C. from Kentucky to partake in the recent March for Life rally. Although the truth was revealed five days ago, that the boys were not behaving inappropriately toward a Native American protester, Representative Omar chose to keep her original false tweet excoriating the children up on her twitter feed. She only took it down after we highlighted it on our nationally-syndicated radio show and the Covington schoolboy‘s attorney had threatened to sue Omar.

Omar is not just some activist from Minnesota. She is a member of the House of Representatives. What’s more, she was recently named as a member on the House Foreign Relations Committee. Omar will be receiving classified intelligence reports on a daily basis and will have considerable sway over the major foreign policy decisions of our country. Given this, her previous antipathy toward the democratic Jewish state of Israel, as well as her penchant for apparently believing–and publicly repeating–lies in order to further her radical political agenda are deeply troubling.

More bizarre than her tweeting and her politics are some of the actions she took before she became an elected official. Media accounts have asserted that, in 2002, one of the two marriages that Ilhan Omar was involved in was to her brother. She supposedly married her brother briefly in order to allow him to acquire American citizenship. At first, Omar refused to respond to the claims. Then, as time went on and the questions kept piling up, she denied it. There has also been allegations made that Omar misused campaign funds to both pay for her divorce attorney and to pay for her personal travel.

Omar is a dangerous radical who has been given the keys to America’s most powerful institutions. She has exhibited brazen disregard for the truth; she has abused the system and taken advantage of the law and she has perpetuated the most disgusting attacks against Israel and her political rivals. Given that she hails from a very Liberal district in Minnesota, and she is considered to be one of the new rising stars in the Democratic Party, her threat to America’s democracy will only continue. Conservatives must be always ready to call out her racism. 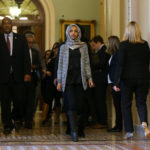 The Radicalism of Ilhan Omar