The “Notorious R.B.G.” has become, well, a bit of an urban legend–like Sasquatch or Hillary Clinton’s missing emails. We all can talk about these stories in general, but the details get a little fuzzy, even as a major (though inaccurate) movie about the life and times of the Left’s favorite living (we think) Supreme Court justice is released. Here is what we know about Justice Ginsburg: at the age of 85, when most people her age are spending their days sipping soup through a straw at a nursing home and playing bingo, Ginsburg has remained an active jurist in the highest court in the land. In December of last year, she checked herself in to a hospital for major surgery. Afterward, she went into seclusion. What was dubbed as “routine” surgery (respectfully, no surgery at 85 is “routine”) became a quasi-missing persons case.

RBG missed three previously scheduled court appearances, despite her representatives having claimed that she was the picture of health after her successful surgery in December. Toward the end of January, when RBG was scheduled to appear at a two-hour speaking event honoring her career in Los Angeles, she had to cancel at the last minute, citing personal reasons. All of this, despite public assurances from her team and a defensive Democratic Party that she was healthy and would reappear. Then came the great test: the February 5th presidential State of the Union Address. The “Fake News” Industrial Complex assured weary Americans that the “Notorious R.B.G.” would be present in the House Chamber when President Trump spoke. Any claim that RBG was sicker than her representatives were letting on was deemed the work of fantastical conspiracy theories.

Yet, when it came time for the State of the Union, Justice Ginsberg was conspicuously, even notoriously, absent! So much for conspiracy theories, Will Sommer?

Just when it couldn’t get any worse for the Phantom of the Supreme Court, RBG, a play honoring her life premiered earlier this month. Ginsburg was the guest of honor. Yet, when the curtains went up and the spotlights turned on, RGB seemingly wasn’t there either. Some reporting from the Fake News Industrial Complex claimed that Ginsburg was seated in the back of the theater. Yet, theater etiquette would dictate that plays honoring living persons will have their subject seated prominently in the front row, in order for them to be recognized by the production that is based off their life.

Fact is, the “Notorious R.B.G.” that Leftists hold up as the paragon of modern virtue and feminism has been absent from her essential duty while at the same time shirking public appearances. Despite what her rabid defenders would say about alleged conspiracy theories, Ginsburg has a job that requires her to be physically and mentally engaged with whenever the Supreme Court of the United States is in session (such as it currently is). Missing some work due to a major surgery is one thing. Checking out of work months after the surgery supposedly went without a hitch is very different all together. The media cannot help but to pile on the President when he has unstructured periods of time on his presidential schedule (despite the fact that he keeps doing his job–and doing it exceedingly well). Ruth Bader Ginsburg is incommunicado, however, and the Left shrugs indifferently.

This is not about piling on an old woman. This is about the fact that, as a leading member of a co-equal branch of our federal government, one that decides some of the most consequential aspects of our country’s legal and cultural mores–with long-lasting impacts, Ruth Bader Ginsburg is not there. Elsewhere, the media reported that Ginsburg has finally returned to the Supreme Court. Whatever the future may hold, we must remember just how old Ginsburg is. Inevitably, she will have to replaced. Yet, the Left continues propping her up like the titular character in the Weekend at Bernie’s film. Soon, Ginsburg will have to step aside. The Left will not stop propping Ginsburg up because they know that there are few people who could replace her as long as Donald Trump is in the White House.

The true problem is that there is no mechanism for removing a decrepit judge who refuses to surrender to the reality of her age. This is also only about denying President Trump another pick for the United States Supreme Court. The Left knows that the President will choose a young, conservative jurist who will protect the culture and institutions of this country from the once-unstoppable Leftist assault upon our great land. Together with Congress, President Trump should propose a new set of rules and standards that will allow for America’s leaders–regardless of their political orientation–to ensure that the important work of the Judicial Branch is realized unimpeded by the potential obstinacy of one or more of its elderly, highly-partisan members. The Supreme Court is simply too important to be left in the hands of those who otherwise would be in a retirement home. 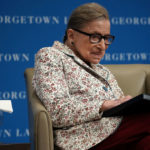 The Phantom of the Supreme Court: Ruth Bader Ginsburg