Senator Amy Klobuchar (D-MN) has announced that she will be officially running to become the Democratic Party’s presidential nominee in 2020. To say that the Democratic field has become oversaturated with candidates is an understatement. At present, there are 11 Democrats who have officially announced their intentions to run for the White House. But, behind those confirmed candidates is an eclectic host of Democrats–and one independent, former Starbucks CEO, Howard Schultz–who are all vying to be the kind (or queen) of an increasingly radical political hill.

As time progresses, the winnowing out process will begin. Unfortunately, with presidential campaigns starting earlier and earlier, the American people will be inundated with an increasing array of radical and, frankly, fantastical ideas posited by the Democrats, all in an effort to appeal to the most fringe elements of the increasingly-radical Democratic Party. Each one of these candidates have proven themselves to be hypocritical–in many cases backpedaling on previously reasonable policy positions, such as support for a border wall. To prove that the 2020 Democratic Party’s presidential primary will be nothing more than the theater of the absurd, several confirmed candidates have had to march before the TV cameras, to engage in a litany of apologies for their previous, somewhat-reasonable, stances on issues ranging from gay marriage to immigration.

In order to be in the good graces of both the party leadership and most of the Democratic Party’s Leftist base, like the Communists of old, the candidates seeking high office must pass an ideological purity test. If they are found wanting–such as Howard Schultz, who was so frightened by the radicalism of the Left that he chose to forego the primary process entirely and contemplate running as an independent–they will be castigated as ideological deviants threatening the hive-like integrity of the all-important party, and cast aside before even being allowed to reach out to voters.

For example, Senator Kirsten Gillibrand (D-NY), has had to beg for forgiveness for her previous support of the Clintons. She had positioned herself as the rising star of the “Me Too” movement but now cannot have former President Bill Clinton’s past history of philandering interrupt her rise. Additionally, she accepted sizable campaign donations from the noted, serial sexual predator, Hollywood mogul, Harvey Weinstein for years. And, she previously supported sensible border controls! Now, however, she is attempting to airbrush her history in order to sanitize her past associations with the Clintons, and is calling to abolish the Immigration Customs Enforcement (ICE) bureau, so as to look “extra” hard-Left.

Another prime example is Senator Elizabeth Warren (D-MA). After having benefited for years by claiming Native American heritage in order to gain a prestigious teaching position at Harvard University, it was recently revealed that she also lied on her Texas Bar application in the 1980s by–yet again–claiming Native American ancestry. She has none. And, Warren has gone to great effort to hide the fact that she was a staunch Republican for most of her adult life. Now, instead, she parrots the correct political line about respecting LGBTQ issues, abortion (infanticide), and unfettered taxation upon “the rich.”

Then, there is Senator Corey Booker (D-NJ), a.k.a. “Spartacus.” Here is a man possessed seemingly of modest intellect and infinite means. The scion of a wealthy family, Senator Booker also has a tenuous relationship with the truth. Before he ran for the United States Senate, in 2013, it was Booked who claimed that he had a “good friend” who went by the name of “T-Bone” from 2002-08. According to Booker’s long-time mentor, Clement Price, a professor of history at Rutgers University, Booked confided to him in 2008 that T-Bone, the drug-addled junkie who, at one point had threatened Booker with physical harm, and at another point, hugged him, was a “composite of multiple people” who Booker knew in Newark. Offended, Professor Price warned Booker against using that reference publicly again, and so after 2008, “T-Bone” was scrubbed from Booker’s speeches. The biggest complain that Clement Price had about Booker’s depiction of a poor, African-American drug user from the inner city was that it had a “southern-infected name,” thereby compounding negative stereotypes against black people.

During the outrageous Supreme Court nomination hearings of Brett Kavanaugh, Senator Booker was one of Kavanaugh’s fiercest critics. Booker was so filled with hatred for Kavanaugh, that he helped promote vicious fabrications about the renowned district judge turned-Supreme-Court-nominee, such as claims that a young Brett Kavanaugh was a serial rapist who used his “white privilege” and power as a man to coerce young women into forced sexual encounters. Senator Booker promulgated these vicious lies, along with his partner-in-slime, Senator Kamala Harris (D-CA), in a bid to be made captain of the raging “Me Too” movement.

Then, there is the aforementioned Senator Kamala Harris (D-CA). A woman who was also born to upper-middle-class minority parents. Senator Harris also aspired to be the commanding of the new “Feminist” movement that had been pushing for the destruction of heteronormative masculinity and traditional American values. Harris viciously attacked Judge Brett Kavanaugh, in order to qualify her bona fides to the increasingly uber-radical Left. But, like her senate colleague, Kirsten Gillibrand, Harris’ sincere support for the nostrum underpinning the Feminist cause–that women are exactly equal to men and do not need special treatment from them–is questionable at best.

You see, in order to catapult her career to the stratospheric heights Senator Harris has achieved, she slept with a married man 30 years her senior, who was also the mayor of San Francisco when Harris was just starting out as an assistant district attorney in San Francisco. Whatever merits Senator Harris may possess, they were colored by the fact that her year-long tryst with the former San Francisco mayor, Willie Brown, in 2002 led to her making critical personal contacts with wealthy Liberal political donors, and resulted in Harris’ nomination to a highly lucrative position on the city commission.

These are just a few of the Democratic Party’s frontrunners who’ve announced their intentions to run for the presidency in 2020. They are proven liars, chameleons, and panderers. More disturbingly, though, these individuals are “democratic socialists.” In other words, they’re both your classic archetypal politicians (in terms of their disposition) while acting as the most destructive radicals this country has ever seen in Congress. Meanwhile, President Donald J. Trump has offered an alternative vision that has already yielded historic gains for all Americans; he has resoundingly defeated ISIS and continues to rely upon American strength to rollback strategic rivals, like China and Russia, while holding the line in the ongoing Culture War against the radical Left.

The President has also helped to usher in an economic renaissance, that has seen the return of almost five percent GDP growth, has the lowest unemployment rates in recent history–especially for minorities–and in which the stock market continues to soar to historic highs (benefiting everyone).

The divide going into 2020 is clear: do you want a clear track record of reason, strong leadership, and continued success of the sort that President Trump has given us? Or, do you want to support the Democratic Party which espouses the most radical positions on everything from race to infanticide to sexual politics–whilst insisting that the United States isn’t great? 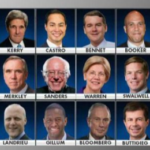