As the situation in Venezuela deteriorates, the American media–the Fake News Industrial Complex–continues getting important parts of the story completely wrong. The most recent falsehood reported by the press was that American forces that have been moving into Latin America in response to the crisis in Venezuela are conducting military exercises in preparation for invading Venezuela.

As always, the media fails to report the context of the full story. And, as with most things, context is king. Since the crisis in Venezuela began, at the request of America’s allies in South America, a small contingent of American forces have been deployed to the region. This was a natural and necessary step, as Venezuela is located in our hemisphere of the world; what happens there affects the United States.

Remember, that the former head of Southern Command, Admiral Kurt Tidd, warned Congress in 2017 that many of the land routes linking Latin America with the United States’ southern border were left woefully undefended–and that U.S. Southern Command did not have the necessary funding to keep those paths secured. The chaos in Venezuela has prompted millions of Venezuelans to flee, both legally and illegally, out of the country and march across the region…even coming up to the United States, which is already experiencing a major immigration crisis.

Thus, the movement of American military forces in the region is sensible and preventative measure.

Contrary to what the Fake News keeps insinuating, the presence of American forces conducting increased levels of military exercises near Venezuela does not mean that the American military will come marching into Caracas, in an effort to topple the dictatorial regime of Nicolas Maduro. Instead, the handful of U.S. forces in the region are training partners and preparing for contingency operations which could see a sudden increase in refugees from Venezuela, or a scenario which Maduro’s military lashes out at their Colombian or Brazilian neighbors, as they did in 2017 against the neighboring Colombia when some Venezuelan troops penetrated Colombian territory and claimed a banana plantation as Venezuelan territory.

Such actions are destabilizing, and as the country continues its tragic collapse, it is it will fall to the countries of the Western hemisphere–of which the United States is a part–to craft policies to mitigate the threat. Fact is, the military trains for various potential operations. That training keeps them ready. It does not automatically mean that the military is going to take action. Not only is it good for a military to practice any potential contingency, but it is also an excellent deterrent for potentially aggressive neighbors. While it is essential for local actors, such as Colombia and Venezuela, to take the lead in responding to the crisis in Venezuela, the fact remains that the presence of even a small fraction of American forces in neighboring countries prevent desperate and trigger-happy pro-Maduro Venezuelan military leaders from taking hostile action against their neighbors.

Plus, the presence of American military units in the area–and the Trump Administration’s commitment to Juan Guaido’s status as the true leader of Venezuela sends a signal to Maduro’s backers in China and Russia that the status quo in Venezuela will not be tolerated. From a grand strategic standpoint, this is excellent for America.

Every American should take solace from the fact that President Donald J. Trump has embraced the Reagan model of “peace through strength.” Like Reagan, President Trump understands that he does not need to invade countries with whom we have disagreements. He is not a Neocon. And, like Reagan, President Trump also knows that one simply cannot appear ambivalent about crises in America’s own hemisphere. The Trump Administration is navigating the fine line of empowering local actors to take their destiny into their own hands–with the United States providing the necessary diplomatic and military cover, as well as the economic support to those who are in need. That sometimes means moving forces into a region and conducting drills. It’s a sign of solidarity and strength. It is not, a declaration of war against Venezuela.

The Fake News Industrial Complex will always get things wrong. They have a partisan political agenda. President Trump, on the other hand, is not a politician, and has one objective: preserving our vital national security interests. 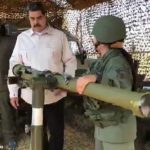 The Media Keeps Getting Venezuela Wrong