In the era of “resistance,” harassment of right-wing figures is perversely considered “heroic” or “brave.” When such Democratic leaders as Representative Maxine Waters openly encourage their leftist drones to harass Trump supporters wherever they go in public, it should not be at all surprising when they do just that.

In so doing, leftists are also unafraid to go directly after the families of prominent pro-Trump figures. Fox News host Tucker Carlson was accosted by a leftist while having dinner at a country club with his son and daughter, with the perpetrator calling his daughter a “whore,” among other vile things. Carlson and his son angrily confronted him, and the country club’s management ejected the man and revoked his membership.

But despite the man so clearly being in the wrong and behaving in such an uncivilized manner, that didn’t stop the disgraced Michael Avenatti from jumping to the man’s defense on Twitter and also attacking Carlson.

Another detestable example is the recent harassment of former Fox News host Eric Bolling. While he was having dinner at the Trump International in Washington, D.C. with campus activist Hayden Williams, a man suddenly confronted him and claimed that Boling’s son, Eric Chase Bolling – who died of a drug overdose in 2017 – committed suicide “because he was embarrassed by his dad.”

Bolling did not hold back, following the hateful man outside the hotel and scolding him for using such despicable language about his family tragedy. Bolling later (rightfully) refused to apologize when a video of the incident went viral, declaring that “We’re all human beings here. And some things are just off-limits.”

But unfortunately, nothing truly is off-limits when it comes to the Left. Nor, is such behavior beneath the Left’s allies in establishment conservatism, or “Conservatism, Inc.” And no one better personifies these faux conservatives than the endlessly whining William Kristol. Kristol, enraged by the rise of Trump and nationalist populism among the Republican Party’s base – as well as, perhaps as a result, the death of his beloved publication The Weekly Standard – has shed any and all pretenses of being an actual conservative and has gone full leftist.

Nowhere is that more evident than in his appalling hit job on the 2019 gathering of CPAC, when his new publication The Bulwark hired the notoriously far-left and pro-abortion activist Molly Jong-Fast to go to CPAC and harass conservatives for their pro-life stance, and ridicule a famous conservative broadcaster who had just recovered from cancer therapy.

With that disgusting display, gleefully endorsed by Kristol through and through, Kristol not only transcended pure anti-Trump sentiment to attack one of the core tenets of conservatism as a whole; he also permanently crossed that line of civility, openly endorsing the same uncivil behavior as leftists who curse at the children of conservative commentators, or mock the death of someone’s child by overdose.

But of course, don’t underestimate the Left’s ability to go even lower. Alongside harassment of their targets in public, the Left has also made frequent use of the criminal act of doxxing, which means to publicly release personal information about their targets, including addresses; once that is done, their victims can truly find no safe place to escape harassment, whether it be in public or at their own homes.

The earliest and most frequent examples of doxxing can be found at the hands of the far-left domestic terrorist group known as Antifa. Since just about everyone to the right of Joseph Stalin is considered a neo-Nazi in Antifa’s book, they have gone after just about everyone they can think of. From doxxing 1600 ICE agents to threatening Tucker Carlson’s family by mobbing his house late at night, there are few methods beneath these vile “activists.”

In recent months, the Left has gone even further by doxxing not only adults, but children. Who could possibly forget the Left’s frenzy over the Catholic schoolboys from Covington, Kentucky, who were only guilty of the crime of being young Christian white men wearing MAGA caps?

Because Nicholas Sandmann and his friends simply stood their ground and displayed an admirable level of restraint and maturity, they faced thousands of explicit death threats from around the country – including the discredited pundit Reza Aslan, the hack comedian Ben Hoffman, and Hollywood filmmaker Jack Morrissey – which eventually forced their high school to undertake very serious security upgrades.

You would think that after the release of full, unedited videos irrefutably proved that the teens did nothing wrong, and after Sandmann punched right back with three different defamation lawsuits against CNN, the Washington Post, and NBC (for a combined total of $800 million), that the Left would realize their egregious error and back off.

But no, the media just couldn’t help themselves. NBC Universal, even after being slapped with a $275 million lawsuit, took a further not-so-subtle jab at Sandmann, still trying to portray him as “guilty.”

In a recent episode of “Law and Order: SVU,” the Covington incident was recreated with an absurd leftist twist: A character strongly resembling Sandmann, along with several other Jewish teens, are seen berating a Muslim councilwoman over her criticisms of Israel. The Muslim woman, obviously based on the anti-Semitic congresswoman Ilhan Omar, makes anti-Semitic slurs and later accuses the boys of raping her. Although the boys are later found innocent of the allegations, the show still portrays the Muslim woman as a victim, and she gets away with her false allegation and her anti-Semitism scot-free (just like the real Ilhan Omar).

And yet despite the overwhelming backlash against the Left’s atrocious actions towards Sandmann and the other Covington boys, some on the Left still haven’t gotten the message that doxxing and harassing minors is wrong.

The most recent example comes from the arrogant and self-righteous Brian Sims, a member of the Pennsylvania House of Representatives. In the span of roughly one month, he excitedly posted videos of himself twice harassing pro-life women who were protesting outside of a Planned Parenthood clinic in Philadelphia.

In both cases, he shouted racist and sexist comments at the women and encouraged his supporters to dox them; in the second instance in particular, he offered a $100 reward to anyone who would dox the three teenage girls for the crime of praying outside of an abortion clinic.

In response to the second video going viral, a massive pro-life rally was organized outside the same Planned Parenthood clinic, with over one thousand demonstrators in attendance, in a direct response to Sims’ harassment and doxxing of pro-life minors. Sims locked his Twitter account shortly afterward. Apparently the Left can harass, but will immediately run away from criticism of their actions.

There are three things to be learned from all of these blatant intimidation attempts.

Firstly: These tactics will be shamelessly used by the Left, whether it’s faceless thugs in the streets, prominent celebrities, or even elected officials. This is a widespread disease that has infected virtually everyone on the Left.

Secondly: Nothing is off-limits to the Left. They will harass their targets in public and where they live. They will say the most vile things about the children of people they don’t like. And they will even go after children, including underage girls. To them, everyone on the Right is an enemy, no matter the age or gender, or their cause.

The last thing to remember is by far the most important one, as well as the most encouraging: We always can, and should, fight back, because it works. Whether it’s Tucker Carlson and Eric Bolling standing strong in the face of such hatred, or Nicholas Sandmann filing multiple lawsuits for hundreds of millions of dollars in damages, or the pro-life movement immediately stepping in to assist their own against a vicious bully, there is no obstacle or enemy that cannot be overcome by handling them the same way you would handle any bully: By standing up, punching back, and sticking together.

These tactics seek to defeat us by scaring us into submission, sending us scattering out of sheer intimidation. But if we show no fear, remain united, and resist their evil and violence with all of our strength, we can win this political war. And remember: The Left’s normalizing of these tactics must be met head-on, lest it lead to another James Hodgkinson-like incident, in which a devout leftist took a rifle and a handgun to a baseball diamond to commit mass political assassination and almost succeeded. 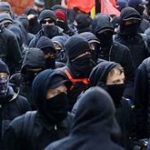 The Left Normalizing Violence: The Widespread Use of Doxxing and Harassment