When running for the presidency in 2012, Donald Trump endorsed Mitt Romney’s candidacy with great fanfare. “It’s my honor, real honor and privilege, to endorse Mitt Romney.” Trump said, adding that, “Mitt is tough. He’s smart. He’s sharp. He’s not going to allow bad things to continue to this country that we love.”

For his part, Romney was more than giddy to receive the praise and endorsement from Trump. Grinning from ear-to-ear, the consummate politician, Romney, enthused, “Donald Trump has shown an extraordinary ability to understand how our economy works, to create jobs for the American people. He’s [created jobs here] for the American people […] He understands that our economy is facing threats from abroad. He’s one of the few people who stood up and said, ‘China is a cheat.’”

Four short years later, after having been trounced by Barack Obama in 2012, Romney changed his mind. He spent the duration of the 2016 presidential campaign lampooning Donald Trump’s candidacy. Romney did everything in his power to attack and impugn Trump—saying that he was everything from a crook to a liar; insinuating Trump was a Russian troll, just as the Democrats have asserted for years, and that Trump was not, in fact, a good businessman. According to Romney, Trump was nothing more than a “con artist.”

Well, the Republican Party had moved away from the neoconservative vision that had hijacked the GOP during the 1990s and had elevated Romney to a believable candidate in 2012. Romney has long desired to be president (likely inheriting his Oval Office delusions from his father, another failed presidential candidate, George Romney). He ran as a classic small government conservative in 2008 and got crushed by John McCain. He ran again in 2012 as a man who was “severely conservative” (whatever that means). There was speculation that he was gearing up to run again in 2016. Ultimately, he chose not to. Once he saw Trump—a man who did not share Romney’s globalist predilections—dominating the Republican Primary, Romney came wading into the fight yet again with his accusations against Trump’s trustworthiness and character.

Yet, Romney’s flip-flopping wasn’t over. Once Trump won the presidency, Donald Trump reached out to Romney with the hand of friendship yet again. While there was never any guarantee, Trump did seriously consider Romney for his secretary of state (that role ultimately going to the disappointing Rex Tillerson). Despite not getting the job, Romney resolved to run again for high office—this time in Utah for the United States Senate. Once more, Romney asked Trump for an endorsement in the 2018 elections and Trump gave it (although, in the run-up to the endorsement Romney did everything in his power to distance himself from Trump).

After winning his senate bid, just before being sworn in, Romney did yet another flip-flop and turned on Trump once more. In a scathing op-ed for the Washington Post, Romney castigated Trump’s lack of character once more. Ostensibly angered by the departure from the Trump Administration of his fellow globalists (like H.R. McMaster and Gary Cohn), Romney blasted Trump for being “angry and resentful” and perpetuating the politics of resentment and anger (of course, Romney never once directs his ire toward Hillary Clinton, Barack Obama, and the ANTIFA Leftists who actually use violence against the Right).

Even as a matter of substance, Romney’s complaints about Trump fall short. Far from being angry or resentful, Trump has consistently attempted to heal the political division in this country by reaching out to the Democrats—and that was when the Republican Party held the majority. Trump sought compromises over everything from repealing the Affordable Care Act to tighter gun laws. He even offered the Left a deal on their believed “Dreamer” program (so long as they funded the wall). The Democrats said “nyet!” every time. Instead, Nancy Pelosi and Chuck Schumer wanted to encourage greater rancor and division in the United States.

The current political climate is broken precisely because of milquetoast, treacherous professional politicians who lack a spine to stand for the American people. Virtue-signaling politicians, like Romney and outgoing Senator Jeff Flake (R-AZ), are not uniters—no matter how morally superior they may fancy themselves. They are the dividers and people like Romney are the reason why the country is in its current predicament. Romney isn’t courageous. He is a coward and why America elected Donald Trump. 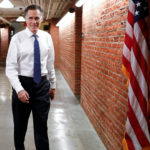