Perhaps the most important thing to take away from the saga of Ilhan Omar’s repeated racist, anti-Semitic, and anti-American statements is the fact that the Democrats have all but capitulated to their growing far-left radical base. Whereas any decent political party – even the Democrats of less than 20 years ago – would be swiftly condemning Omar’s remarks and punishing her for her vile slurs, the Democratic Party of today is too afraid of upsetting their new socialist base, and thus continues to let her get away with her open bigotry.

But if there’s a second major lesson to be learned from all this, it would be the stark differences between the leadership of the Democratic Party and the Republican Party, and how one continues to make excuses for its radical elements while the other is all too eager to throw their own to the wolves for lesser offenses.

The double standard between the constant excusal of Ilhan Omar’s bigotry, and the sacrificing of Steve King at the altar of political correctness, could not be more blatant and disproportionate.

Congressman King has been a member of the United States House of Representatives since his first election in 2002, the longest-serving member of the House from Iowa. As of the 2018 midterms, King is also the sole Republican in the House representing that state. He is a strong supporter of President Trump, particularly on the issue of rampant illegal immigration, which, along with multiculturalism, King has rightfully criticized as harmful to America.

And yet for speaking this truth, King has been demonized by the media with every fearful moniker that you can think of. Because King holds a view that is widely shared by most of the U.S. population – and by the current President of the United States – King has been called “far-right,” “alt-right,” a “white nationalist,” and a “white supremacist.”

To give you some examples of King’s so-called “bigotry;” he has previously said that the Western world “is on the decline,” citing the impact of mass migration to Europe and the subsequent social strife that so-called “diversity” has caused on the continent. This just so happens to be a sentiment that President Trump himself stated in his historic speech in Warsaw, Poland.

The Anti-Defamation League called this hate speech, and also criticized the fact that he made this statement in an interview with the Freedom Party of Austria, which the ADL falsely calls “far-right,” despite the party currently being part of the ruling government of that country.

In the aftermath of the Pittsburgh synagogue shooting, the ADL also tried to accuse King of being anti-Semitic, and thus somehow responsible for the violence that day. Their evidence? The fact that King has criticized the far-left billionaire George Soros, who happens to be Jewish.

Although this allegation is nonsense, it was enough to convince one of the most spineless members of the House Republican caucus to do the media’s bidding. Representative Steve Stivers (R-Ohio), then chair of the National Republican Congressional Committee, declared King to be a racist in October of 2018, and withdrew crucial funding to King’s re-election campaign that year. Stivers had done the same to Seth Grossman, the Republican nominee for New Jersey’s 2nd congressional district, which led to Grossman losing and causing a red seat to flip blue that November. Fortunately, King survived the onslaught from all sides and was re-elected by a close margin, even as his two fellow Republicans both lost.

But the media wasn’t done with Congressman King. In January of 2019, the New York Times released an interview with King, in which King allegedly questioned why the terms “white nationalist” and “white supremacy” were controversial. King himself later clarified that the Times had taken his words out of context and deliberately changed the punctuation in a deceptive manner.

King charged that he had previously been making a point about all the slurs that are falsely used against those on the Right, which included “white nationalist and white supremacist.” He then said that his very next sentence was, “Western Civilization…when did that language become offensive?” But through editorial manipulation, the Times made it appear he was lumping all three terms together and questioning the offensiveness of all three, rather than only Western Civilization.

But this defense wasn’t enough. The new Republican minority, under the non-leadership of Kevin McCarthy, swiftly condemned King through a unanimous House resolution, and removed him from all of his committee assignments.

There is no greater manifestation of the smearing of average Americans, and widely-held conservative beliefs across the nation, as “racist” and “white supremacist” than the character assassination of Steve King. King may be somewhat inarticulate, or at least not the most media-savvy (no Republican should ever trust the New York Times), but if he is a racist or “alt-right,” then so are the 63 million Americans who voted for President Trump, who believe all of the same things as Congressman King. They are not.

Now compare this injustice with the relative ease with which Ilhan Omar regularly gets away with legitimately anti-Semitic statements, and has done so on an almost regular basis for the last 7 years.

An unapologetic hater of the state of Israel, Omar has repeatedly accused Israel of engaging in “apartheid,” and has used many anti-Semitic tropes to express her hatred for Israel. In a tweet from 2012 that she only recently deleted, Omar said that “Israel has hypnotized the world, may Allah awaken the people and help them see the evil doings of Israel.” When confronted on this, she refused to apologize and even questioned why these comments should be considered offensive to Jewish people. Despite this taking place before the election of 2018, Omar was easily elected to the House of Representatives.

Entering Congress only emboldened the anti-Semite, who stepped up her rhetoric after she was sworn in. In two separate tweets in February 2019, she directly implied that members of Congress are being bought off to support Israel, and followed up by directly naming the American Israel Public Affairs Committee (AIPAC) as the alleged financier of this treachery. Despite being condemned by members of House leadership from both parties, Omar took matters a step further and made yet another anti-Semitic comment, accusing pro-Israel groups and politicians of “pushing for allegiance to a foreign country.”

Only after that comment did the Democrats finally agree to a resolution to be passed on the matter. However, unlike the one passed against King, this resolution did not name Omar specifically. It was also changed numerous times to eventually include other forms of bigotry, including “Islamophobia,” thus completely undermining the original intent.

And after all of this, Omar managed to avoid the punishment that had been dealt out to King: She was not removed from any of her committee assignments, despite President Trump’s calls for the Democrats to do so. To this day, Omar still sits on three committees, including two of the most important committees in the House: The Budget Committee and the Foreign Affairs Committee.

Yes, you read that right: Ilhan Omar, a raging anti-Semite and vicious critic of our closest ally in the Middle East, sits on the House Foreign Affairs Committee.

Ironically, Omar herself displayed her own kind of blind loyalty to a “foreign allegiance” when she described 9/11 in terrifyingly simple terms during a speech to the Council on American Islamic Relations (CAIR): Downgrading the severity of the deadliest terrorist attack in history, Omar described 9/11 as “some people did something,” and claimed that this “something” led to a rise in Islamophobia in the country. Not only did she diminish the suffering of the victims of 9/11, but she also tried to essentially portray Muslims as the true victims of that awful day.

Surprisingly, as quickly as even House Democrats condemned her anti-Semitic comments, the party leadership’s response to her abhorrent 9/11 comments was a deafening silence. House Speaker Nancy Pelosi chose to criticize President Trump for calling out Omar’s comments rather than condemn Omar herself, and even decided to enable Omar further still by assigning increased security to Omar’s Capitol Police detail.

Naturally, this made Omar even bolder in her bigotry, and she decided to go even further than anti-Semitism and downplaying 9/11. Since then, Omar has made explicitly racist statements against white Americans as a whole. At a rally outside the Capitol in April, Omar had the audacity to first accuse President Trump of fostering anti-Semitism in the country. (Apparently Omar has never read her own tweets.)

Just imagine if Steve King, or any Republican, declared tomorrow that in a few years, America “won’t be a country for black people.” The universal outrage would be swift, and rightfully so.

And yet here we have a sitting member of Congress, saying that all white people in America are problematic. Don’t have a racist bone in your body? It doesn’t matter, because if you have white skin Ilhan Omar is now openly cheering for your misfortune, in the name of the Left’s sacred cow of “diversity.”

Omar continues to get away with it because she is of a protected status. And no, not because she is a woman, a Muslim, or a person of color; but because she is a Democrat, which is a foolproof safeguard against any scrutiny by the media, or punishment by the party, or any meaningful repercussions.

Omar still sits on her committees. Steve King doesn’t. Omar has not been explicitly condemned by her party leadership. Steve King has. Omar’s election campaign was not sabotaged by her own side. Steve King’s was.

And through all of this, remember that if Congressman King was actually an anti-Semite and a racist, this saga would be a testament to the GOP actually having virtue where the Democrats have none; for this, they would be quite commendable.

But King is not a racist, not an anti-Semite, and not a white supremacist; he holds views that are indeed quite mainstream in America, yet he is still labeled fringe and a radical, left out to dry by his own party when the media pressure is too strong. The truth is thrown to the wind to gain favor with the media, while the real racists in our society run free to spew their hate with no consequences whatsoever. That is the double-standard that truly personifies everything wrong with the current state of American politics. 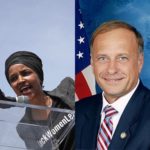 The Double-Standard Between Ilhan Omar and Steve King