The charge of racism and bigotry is almost uniformly lobbed by militant Leftists at their political rivals on the Right. Yet, the history of racist ideological politics can be better attributed to the Left than to anyone on the Right. Naturally, as with all national political movements, there are fringe figures on the Right. Although, these fanatics are exactly that: isolated figures who few take seriously. But, going back to the era of chattel slavery, when Africans were shipped en masse from Africa aboard European and American cargo ships and then sold to plantation owners in the American South, it was the Democratic Party—not the Republican Party—that represented the interests of the slave-owning elite in the United States.

Jefferson Davis, the president of the Confederate States of America in the American Civil War was previously the highest-ranking elected Democrat in the United States before the war tore the nation asunder (he was the Speaker of the House). Those notable Americans who remained fighting for the Union, but who held sympathy toward the Southern cause—such as the hapless Union Army General George B. McClellan—were not committed to defeating the secessionists in the South. Instead, McClellan and those like him in the Democratic Party cared little for the moral issue of slavery; they wanted to make peace with the South and were willing to allow for slavery to continue as it had before the war.

In fact, the Republican Party was birthed during the contentious American presidential election of 1864 in order to better resist the racist fanaticism of the slave-owning Democrats in the American South. While in office, President Abraham Lincoln befriended the freed slave-turned-moral-philosopher, Frederick Douglas, as Lincoln had become increasingly committed to freeing the slaves as the Civil War dragged on. Another influential African-American thinker, Booker T. Washington was a proud member of the Republican Party, who often extolled the virtues of hard-work and lamented the plantation politics that the Democratic Party clung onto even after the South had lost the Civil War.

At the turn of the twentieth century, as the country reaped exponential rewards for itself during the Industrial Revolution, yet suffered horrendous income inequality, the Progressive Movement came into vogue. Most Progressives tended to share sympathies with working-class Americans and claimed to support greater civil rights for oppressed minorities. Yet, the Progressives—notably former President Woodrow Wilson, who was born and raised in the American South during Reconstruction following the Civil War—were also social engineers by nature. They favored the politics of eugenics and believed that African-Americans were too ignorant to live as fully free Americans, as Lincoln had wished. So racist were the Democrats that, during the Wilson Administration, the incredibly racist film, “Birth of a Nation” film was screened at the White House in 1915.

From the end of the Civil War until the rise of Franklin Delano Roosevelt in 1933, the majority of African-Americans were members of the Republican Party since that was the party that had freed their people from the vile clutches of Democratic Party-sanctioned slavery. During the Reconstruction Era in the American South all of the way through to the Civil Rights Movement of the 1960s, laws were enacted by racist Democratic Party leaders in the South intended to keep black and white Americans separated and designed to perpetuate true White Privilege—another term that the David Hogg-type Leftist social justice warriors today use with wanton abandon against Republicans.

During the Great Depression many African-Americans were hit hardest by the economic dislocations. Under the promise of alleviating their economic plight, the African-American community started slowly turning to the Democrats. This trend continued throughout the postwar era until, after Lyndon B. Johnson’s presidency, nearly 93 percent of all African-Americans were voting Democratic. Yet, Democratic Party policies never once alleviated the suffering of African-Americans. It merely compounded their woes. This is something that scholars, such as the preeminent African-American conservative economist, Thomas Sowell, and the rapper, Kanye West, have pointed out more recently.

So opposed to the African-American community was the Democratic Party that they formed a militant arm—the Ku Klux Klan (KKK)—in the early twentieth century to intimidate and prevent black Americans from exercising their rights as citizens of the United States. The KKK’s preferred intimidation tactics involved violence of varying degrees. Lynchings of young black men, bombings of African-American churches full of women and children, and racially-motivated beatings were rampant in the Democratic Party-controlled parts of the country. One of the most respected Democratic Party Senators, the late Robert Byrd of Virginia, was a KKK leader in his youth. Although he seemingly renounced his racial animus later in life, the damage was still done.

Even during the Civil Rights Era, when Democrats argue they became the party of minority rights in the country, few elected Republicans ever fathomed challenging the Civil Rights Act of 1964. In fact, most Republicans were committed advocates of civil rights. 80 percent of Republicans supported the Civil Rights Act, whereas only 63 percent of Democrats supported the law. The Civil Rights Act was one of the pieces of legislation that President Johnson crafted to honor his slain predecessor, John F. Kennedy. Yet, most elected Democrats were viscerally opposed to the legislation. Moreover, Martin Luther King, Jr. and other civil rights leaders grew disenchanted with President Johnson when they realized he was more interested in fighting the failed Vietnam War rather than protecting the rights of black Americans. Also, Martin Luther King, Jr. routinely defended the Republican Party from charges of racism during his lifetime.

And finally, look at the disproportionate suffering that modern African-Americans are made to endure. Almost all of the pain that black Americans experience today is felt in the major cities around the country. And, almost every one of these cities—from Baltimore to Chicago to Los Angeles—are run Democratic Party fiefdoms. Compare how poorly the African-American community has done under decades of “caring” Democratic leadership to the kind of bold, color-blind leadership exemplified by President Donald J. Trump in just the last two years. Presently, according to the Bureau of Labor and Statistics, the unemployment rate for African-Americans has hit an all-time low at 5.9 percent! Under Republican leaders, the black community routinely does better than they do under Democratic leaders.

Candace Owens and Kanye West are correct: the Democratic Party is the party of the plantation; the Democrats are still the real racists. 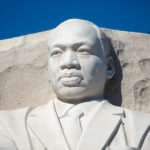 The Disturbing History of Racism in the Democratic Party