The Democratic debate stage may have shrunk significantly, but the candidates’ collective race to the Left continued at full speed.

Many things were made clear as the ten faces of the Left debated one another. Robert Francis O’Rourke, when asked if he wanted to confiscate firearms from American citizens, replied with an eager “hell yes.” Pete Buttigieg declared that everyone who supports President Donald Trump is a racist. Julian Castro continued to perpetuate the lie that President Trump somehow inspired the El Paso shooter, even though the shooter himself admitted he was not inspired by President Trump. Elizabeth Warren and Bernie Sanders vehemently supported the idea of eliminating all private health insurance in favor of universal healthcare.

These are but a few of the things that were said without shame and without compassion by the 10 candidates. They all expressed total contempt for the American taxpayer, and the man who was elected by 63 million Americans in 2016.

And above all else, it is clear that their vision of America, in both the past and the future, is a dark one indeed. They openly advocated for more mass migration, increased taxes to offset the costs of their absurd healthcare proposals, vowed to take away guns, and repeatedly spoke in Spanish to pander to minorities and Illegal Aliens. Some even declared that America was founded on racism.

These people were not campaigning to be President of the United States of America. They advocate for socialism while disparaging capitalism, preach about tolerance while promoting the conspiracy theory of “white supremacist” terrorism, and call for unity while labeling half of the country as racist or bigoted.

The Democrats only seek to turn us into the Divided States of America, and we must do everything in our power to make sure that their hate is wholeheartedly rejected at the ballot box in 2020. 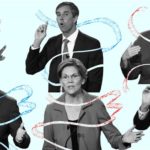 The Democrats Hate Trump. And They Hate America