For the Left, preventing the construction of a border wall is nothing more than a political issue. For President Trump, it is a matter of national security and doing “the Right thing.” To underscore this, President Trump used his first primetime speech from the Oval Office on this issue alone. The president’s speech was concise and compelling. The Democratic response was turgid, sclerotic and contradicted the exact positions both Schumer and Pelosi have held in the past.

Historically, when presidents give prime-time speeches from the Oval Office, it is in a time of national crisis. That was exactly how Trump presented the situation along the southwestern border.

Today, our country is being flooded with illegal immigrants from the porous southwestern border. The Border Patrol is doing its level best to protect us, but it needs help in the way of more funds, reinforcements, and physical barriers. A wall. All of which, of course, the Democrats, who now possess a slim majority in the House of Representatives, refuse to provide.

In fact, the Democrats have argued that there is “no national emergency at the border.”

Speaker Pelosi has said that building a wall would be “immoral.” At the same time, Democratic Senate Minority Leader Chuck Schumer of New York argued that the wall is the “wrong kind” of symbol for the United States.

But we can move past symbols to actual facts. Since 2016, in Texas alone, the towns adjacent to the Mexican border have experienced incredible surges in violent crime.

Things have gotten so out-of-hand that last year the tiny, inland California town of Mendota (population 11,000), according to the FBI, became the base of operations for a group of illegal immigrant MS-13 gang members, who perpetrated violent crimes across America, from San Francisco to New York City.

Then, there is the economic impact of illegal immigration. As J.D. Vance has chronicled in The Hillbilly Elegy: A Memoir of a Family and Culture in Crisis, the presence of low-wage, illegal immigrant workers has all but bottomed out critical labor industries. In other words, working-class Americans have been prevented from finding gainful employment in industries that once had abundant employment opportunities for generations of Americans. The longer this situation persists, the more likely these working-class Americans are to turn to drugs and often to overdose or suicide. Here the President gave us perspective by highlighted that more people died in the US last year as a result of drugs which had been smuggled across the border, than had died in all the years of our involvement in Vietnam.

In all of this, the American people have been left vulnerable and undefended by our government in our own land. The fact that violent transnational criminal networks, such as MS-13 are operating within the United States, is a direct result of bad government policies. They are signs of just how feckless America’s political elite have become. Supplicating themselves before the altar of globalism, free-trade, and open borders, America’s leadership – until Donald Trump – was content to ignore the carnage caused to American working-class communities by the persistent presence of illegal immigrants in the United States.

President Donald Trump’s speech was measured and realistic; it also appealed to regular Americans concerned over the future of their country as America’s globalist “elite” continue to encourage greater levels of illegal immigration into the country. The Democratic response was not only perculiar, it was painfully out-of-touch.

President Trump is trying to protect you and all that you love. Schumer and Pelosi want to preserve the power of a political class that doesn’t care if you live or die. 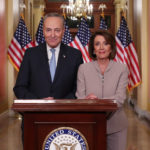 The Democrats Are Whistling Past the Graveyard On Illegal Immigration