The Catholic Church, which has jealously defended its sovereignty for centuries, has made a deal with the Devil. In October of 2018, the Vatican entered into a preliminary agreement with the militantly atheist Chinese Communist Party meant to “protect” the nine million Catholic Chinese citizens who are currently being harassed and oppressed by the totalitarian government in Beijing. The deal was forged in secret between Pope Francis and Chinese President Xi Jinping. But, what has been leaked about the deal confirms the fears of many Catholics around the world–including the Vatican’s secretary of state Pietro Parolin–that the deal was at best “not a very good agreement” for either the Vatican or the Catholic and broader Christian population in China.

The agreement allows for the Communist Party to have a say in who the Catholic Church can nominate as bishops in China. Under the terms of the agreement, while the Communist Party does have a vote in which clergy members are made into leaders in the various Chinese Catholic churches, the Pope is granted the right to veto any of the CCP’s choices. Of course, this does not prevent any dispute that may arise–which will arise, as the Communist Party is highly sensitive to anything resembling foreign influence aimed at reducing the importance of the CCP in Chinese politics. For years, the regime in Beijing has viewed Christian missionaries and Catholic churches as being the vanguard of Western attempts at regime change. The CCP has spent decades not only oppressing the Christians, but other religions and cults–notably the Falun Gong. But, as the population of Christians grows in China, the Chinese Communists have intensified their attempts to control and weaken what they view as the destabilizing influence of foreign ideologies.

The Catholic Church, on the other hand, has taken a different tack. The Vatican has attempted to work openly with the Communist Party leadership. But, this will not end well. The CCP will not countenance the Vatican having a true voice in the affairs of what should be a private organization, such as the Catholic Church. They will attempt to identify people, Catholics in China, for leadership roles that the CCP believes will be pliant to Communist dogma. In other words, the Chinese want to dilute Catholic teaching by installing people they believe will water down the word of God in their country. And, gallingly, the Pope has seemingly consented to these demands.

The Chinese government has a long track record of corrupting Western institutions that many assumed were invulnerable. The companies of Corporate America, the greatest wealth-producing, capitalist machine in history have too often become the handmaidens of the CCP in the West. Free trade was posited as the non-violent way to mitigate the threat of the Chinese Communist Party. In the 1990s, the logic was that American corporations doing trade in China would force the CCP to become more democratic as they made more money from capitalism. This was known as “convergence.” But, the opposite occurred. Once Western corporations began doing business in China and making large sums of money, the Communist Party would force the companies to make concessions to the government: they would require the American companies to reveal trade secrets and to train Chinese workers and employ them. The Chinese government would also force American companies, such as they did with Yahoo in the early 2000s, to work with Chinese state security services to crack down on Chinese citizens who were believed to be violating the political order of Communist China.

American companies routinely violated what were once-believed to have been universal American values, such as privacy and freedom of speech, in order to keep their businesses in China. This pattern repeated over the years. Thus, the 1990s convergence theory gave way to reverse convergence. Rather than changing oppressive China with the power of freedom-loving Western institutions, the totalitarian Chinese were changing the nature of the Western institutions to make them more compliant with Chinese standards. The exact same thing that has befallen Western corporations doing business in China is happening to the Catholic Church. The Western institutions convince themselves that they can resist the pull of the CCP. But, that’s not the case. No Western firm doing business in China has been able to keep its standard operating procedures in place. All have caved to Beijing. The same is true of the Catholic Church.

Historically, when the British Crown wanted the ability to influence Catholic doctrine (over the matter of marriage), the English separated from the Catholic Church. The schism between Catholic and Protestant became insuperable and led to various, bloody, religious wars in Europe. Imagine how bloodless history would have been in Europe, if the Pope during that time had simply told the British monarch that special exemptions could have been made for his needs. Of course, the West would not be what it is today had it not been for that fight. Also, the Catholic Church would have lost the essence of itself if it had ceded its ecumenical authority to a worldly government, such as the one in England. Today, the Pope is not only making secret deals with the CCP, but he is willingly subverting his divine authority to placate a demonic power in Beijing.

As more information about the deal between the Vatican and the Chinese Communist Party is revealed, Catholics everywhere should be mortified. This will not strengthen Catholicism in China. It will weaken it. The deal will give the Communist Party unprecedented power and control over what should be sovereign Vatican policies. Even if the Pope does veto every one of the CCP’s preferred selections for church leadership roles in China, the fact that China must also approve of the choices means that there will be vacancies in critical church leadership positions until the Vatican and Beijing can agree on choices. This would be a de facto victory for the CCP because leaving churches leaderless will weaken the church and empower the CCP. 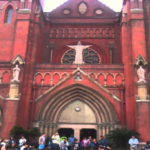