Sebastian Gorka was a Deputy Assistant to President Trump. He left the White House in August 2017, a week after Steve Bannon was forced out. Now he hosts a daily three-hour radio show on the conservative Salem Radio Network.

You were born in Britain. You volunteered for the British Army Reserve. You served in the first freely elected conservative administration in Hungary. Then in 2008 you moved to America, and in 2012 you became a citizen. Why did you choose America?

If you’re the child of parents who suffered as children under a Nazi regime and fascist occupation, and as grown-ups your parents were then persecuted and imprisoned, my father tortured and imprisoned by the [Hungarian] communist dictatorship, it gives you an understanding that perhaps some Americans who are born here don’t have as deeply, and it’s the words of the great Ronald Reagan, that the loss of liberty, the extinction of liberty is always but one generation away. I realized that Reagan was right, that America is the shining city on the hill, and it’s the only nation in the history of mankind that was founded not as an accident of ethnicity or royal dynasty but was founded on the principle of individual liberty and freedom based upon the unalienable rights that we are granted by our Creator. For me it was a love affair with what America stands for.

You were a legal immigrant, and in that sense you have nothing in common with the current political discussion about immigration. But is there a part of you that somehow thinks, “I kind of understand what the draw is for people”?

This whole issue, the President’s immigration reform, the question of the wall, the intransigence and obstruction by the Democrats, is personal to me. My parents, the idea that they would break the law of the country that gave them refuge, was utter anathema to them. They were held in a refugee camp. They had to prove to the relocation officers that they wanted to live in the U.K., that they wanted to contribute to it and that they would be lawful citizens from day one. The idea that, you know, you just pay a coyote a few thousand dollars, you cross the border, and you think you get to sponge off the rest of humanity and get the benefits that others have accrued by standing in line like I did, by doing everything legally, by taking an exam, by paying the government – it’s an outrage.

You left your White House position. You explained your departure in a resignation latter where you said: “Forces that do not support the MAGA [Make America Great Again Agenda] promise are – for now – ascendant within the White House.” Can you say more about what you meant?

It’s very simple. When you have [then-National Security Adviser] H.R. McMaster, who was not part of the Make America Great Again agenda, who was trying to subvert people like myself on a daily basis from doing our jobs; when you had people like [then-Secretary of State] Rex Tillerson, who most definitely did not understand why 63 million Americans elected Donald Trump to be the 45th President of the United States; and when you had people like [then-Chief of Staff] John Kelly who were great Marines and could definitely make a schedule run on time in the building, who really did not understand the political aspect of being a chief of staff and were not copacetic and not simpatico with the President – then I realized I could serve the President much more easily on the outside.

I saw the President recently, and he agrees. As a communicator of the MAGA agenda, it’s much easier on the outside. I’ve got almost 2 million listeners, I’ve got a YouTube channel that’s exploding, I’m on [the] Sinclair [Broadcast Group], I’m still on Fox. Things have improved greatly inside the White House, but there’s a lot of work to be done to see the will of the American people realized across the massive bureaucracy that is Washington, D.C.

In your letter you [criticized] the removal from a presidential speech on Afghanistan any mention of “radical Islam” or “radical Islamic terrorism.” Why do you insist on those terms?

It’s analogous to removing the word “communist” from an analysis of the Soviet Union. I’ve spent more than 20 years studying national security, counterterrorism and the ideology and the strategy and the founding documents of the global jihadi movement. This is who they are. If you deny the fact that these are radical Islamists, if you say they are a function of poverty, you have no idea what you’re talking about. Then half of China would be terrorists. Most of India would be terrorists. This is an ideology. It is called global jihadism. Anybody who denies that is living in a fantasy land and is endangering the lives of the American people.

There are about 3.5 million Muslims in America. And as we know, the vast majority are living peacefully, raising families, attending Boy Scouts, going to school, holding down jobs. What’s your message to them?

I’ll tell them very plainly: They are the key to our victory. A 6-foot-4 white-skinned Catholic from America isn’t going to win the ideological war against this deadly, deadly threat of global jihadism. The majority of the victims of global jihadism are Muslim. Join us in the fight so that we can all be safe. Muslim Americans, Christians, Jews, atheists – that’s who we are. But if you deny the religious content of the extremist ideology, you are literally sticking your head in the sand.

I think if you read the article we posted about the falsification of data on white supremacist attacks in the United States at our website, there’s a sevenfold greater likelihood of you being attacked by a jihadi terrorist than by somebody from the right. I find the fact that all of these studies seem to measure the statistics the day after 9/11 – just happen to leave out the 3,000 people killed on that day – is so telling.

Who’s going to win the Democratic presidential nomination, and which of the Dems do you think would have the best chance against President Trump?

I think Joe Biden is probably going to be attacked even more viciously by the radical base, so Biden is going to be in trouble very soon as another old, rich white guy. I think if you look at the expression in her eyes, the glint in her eyes, the person who wants it the most, the person who’s probably going to fight the hardest, is Kamala Harris. So I think it’s maybe a toss-up between those two. When it comes to who’s going to be most effective against the President: None of them. I mean, when you’re running on a campaign of post-birth abortion, higher taxes, open borders, sanctuary and benefits for illegal aliens, voting rights for murderers and terrorists, I think none of the standing politicians on the left have a snowball’s chance. If the Dems were smart, they’d take a lesson from 2016, even 2008 with Obama, and understand that this is the age of celebrity. Celebrity has become as important in politics as it has in media. I think Obama was our first celebrity president. So I think they need a real outsider. I don’t know if Oprah’s busy, or Mark Cuban, or somebody else, but you need somebody who has name recognition and 5 million followers on Facebook, at least, before you have a chance of going up against the man who has 60 million followers and who had 14 seasons of an incredible successful reality TV show before he decided to become a politician.

This article originally appeared in the Washington Post, 16 July 2019, under the title “Sebastian Gorka says that Obama was our first celebrity president.” 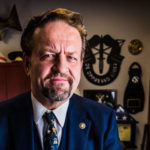 Realizing the Will of the People: Sebastian Gorka’s Washington Post Interview