Audio of Erickson: So the more you test, the more positives you get. The prevalence number goes up, and the death rate stays the same, so it gets smaller, and smaller, and smaller. And as we move through this data, what I want you to see is, millions of cases, small amount of death. Millions of cases, small amount of death. And you will see that in every state.

Gorka: That was a short clip from a video that our internet masters are trying to suppress, from Dr. Dan Erickson and his colleague Dr. Massihi, of Accelerated Urgent Care in Bakersfield. A video that garnered 5 million views before it was deleted by YouTube, and we are delighted, we are honored to have the man you just heard, Dr. Erickson, on the phone with us right now. Dr. Erickson, welcome to AMERICA First.

Erickson: Thank you so much.

Gorka: Let me ask you a very prosaic question to begin with. When you made that video for a local TV news conference, were you expected to be lambasted by your professional colleagues within hours of making it?

Erickson: No, interestingly enough, I had just, I gathered some data for a couple months, and I know they were interested in it, so I said ‘Why don’t we just get together, I’ll give you my raw data and my personal opinion, and we’ll go through it, and you’ll know how many tests I’ve done, which at the time was 5,213, I’ll give you my positives, 340, which is 6.5%.’ And they said, ‘Well, can you estimate from that?’ I said, ‘Well, this is a moment in time.’

I may have not said that clearly the first time, this is a moment in time where we know that 6.5% of my non-randomized people coming in was positive. So can it be extrapolated to California accurately? No it cannot. So, I was merely giving them my raw data, because they were inquiring about it, so I said, ‘Let’s all get together and I will give it to you.’

And I thought it was going to be a pre-recorded local thing that got five minutes at night and was gone. And suddenly, I’m on Fox News and getting ping-ponged around the globe, and I’m not sure what happened.

Gorka: Well, yes indeed, and the Fake News Industrial Complex came after you and your colleague, quoting other doctors, saying, ‘Oh, this video is just the reckless, reckless musings of a doctor who doesn’t know what he’s talking about.’ I watched it, I’m not a medical professional, but I’ve got a Ph.D, I’ve been in university for a couple of years. And all I saw is an individual laying out data and then asking questions. Did you have some kind of ulterior motive, or were you simply laying out data and asking questions, Dr. Erickson?

Erickson: And the big story is herd immunity.

Gorka: Yes, so can we stop for a second? This is crucial. I learned something from that video. I learned to understand what herd immunity is. And let me try, from a non-medical professional’s vantage point, tell you what I understood and tell me if I got it wrong or right. Your explication was that the immune system functions a certain way, meaning the immune system has to be challenged for it to function.

When we’re not talking about vulnerable communities with pre-existing, underlying conditions, but a healthy adult, your immune system is not challenged adequately to create robust defenses by staying at home. If we are outside and we are engaging with various viruses, that helps us develop immunities, and that should be part-and-parcel of our health policy decisions. Did I misunderstand you, Dr. Erickson?

Erickson: No, you got it right on the money. Our immune system is built by exposure to virus, bacteria, we form an antibody complex, and that’s how our body fights disease. So if we say to ourselves, ‘Let us fight disease by locking ourselves in our homes and Lysoling everything,’ that is, from a epidemiological standpoint, this makes no sense to us. We say you fight the disease by herd immunity. Herd immunity happens by people interacting. If you lock them in their houses, they’re not interacting, you flatten the curve, you lengthen the disease cycle, and then you get a secondary – well, you could get a secondary peak. We’re the guinea pigs right now, we’ve never done this before.

Erickson: And then Sweden is looking at us, saying ‘You guys are the guinea pigs. We’re all at work, our kids are at school, we’re doing a little bit of self-monitoring, we’re doing mild self-isolation, we’re trusting our citizens, and our results are good.’ 225 deaths per million, whereas U.K.’s full lockdown, 360 deaths per million.

So I look at the CDC numbers and I say, ‘It looks like, from Dr. Anders Tegnell,’ who’s their chief epidemiologist, he was asked a week or two ago, ‘How are your results?’ He said, ‘We’re very happy with what’s going on in Sweden.’ The people are working, they’re free, our numbers look good, compared to the global stage. The only thing we would’ve changed up, we have large nursing homes, and we would’ve protected them a little bit better. Otherwise, you would change nothing.

Gorka: I am so grateful to you and your colleague, Dr. Massihi, for doing what you did, and just talking sense and providing information to Americans so they can draw their own conclusions. I have to share with you an idea from one of our callers earlier in this show, who said he would like to see both of you in the White House. I think that’s a great idea, I’m gonna see if I can do something about it.

Gorka: Would you accept an invitation from the White House, Dr. Erickson?

Gorka: OK, alright, stay on the line, don’t go anywhere, I want to continue the discussion off-line. But I want to thank you, everybody. Quick, 30-second conclusion with you, Dr. Erickson, get him back on the line, what is the biggest lesson learned for you in the last two months, just in 30 seconds?

Erickson: The biggest lesson we need to learn is that herd immunity cannot be accomplished in the effective way with locking people in their homes. We need to let people out, we need to isolate our elderly and our immune-compromised. Everyone else needs to continue on through life. We need to use appropriate social distancing, just like your grandma told you when someone’s sick.

Erickson: This is not a new concept. Let’s look at Sweden, let’s learn from them, let’s get the economy back going by a stepwise approach, let’s release the kids under 16 back into the system, let’s, after a couple of weeks, we’ll monitor the death rate and we’ll slowly get everything working back. We’ve never done this before, this is new territory, we need to get it going.

Gorka: It’s just common sense. How is your immune system gonna work if you wrap yourself in cotton-wool and stay inside a bubble? It makes no sense. Stay on the line, Dr. Dan Erickson, I’m Sebastian Gorka, this is AMERICA First on the Salem Radio Network. 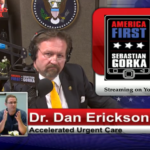 Read the Transcript of Our Interview with Dr. Dan Erickson that YouTube Banned