President Donald J. Trump’s legal team has released their formal trial memo for the upcoming second impeachment trial of President Trump, which is slated to start in the Senate tomorrow. The memo correctly asserts that the trial is unconstitutional due to the fact that President Trump is no longer in office, and thus should be dismissed outright as a sham and a publicity stunt by the Democratic Party.

And watch Sebastian’s latest interview with Jason Miller, a senior advisor to President Trump, discussing the memo and its overall message even further. 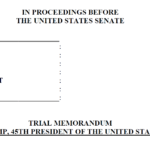