I write on behalf of the Office of the President to memorialize concerns relating to the form of the Special Counsel’s Office (“SCO”) Report (“SCO Report” or “Report”) and to address executive privilege issues associated with its release.

The SCO Report suffers from an extraordinary legal defect: It quite deliberately fails to comply with the requirements of governing law. Lest the Report’s release be taken as a “precedent” or perceived as somehow legitimating the defect, I write with both the President and future Presidents in mind to make the following points clear.

What prosecutors are supposed to do is complete an investigation and then either ask the grand jury to return an indictment or decline to charge the case. When prosecutors decline to charge, they make that decision not because they have “conclusively determin[ed] that no criminal conduct occurred,” but rather because they do not believe that the investigated conduct constitutes a crime for which all the elements can be proven to the satisfaction of a jury beyond a reasonable doubt. Prosecutors are simply are not in the business of establishing innocence, any more than they are in the business of “exonerating” investigated persons. In the American justice system, innocence is presumed; there is never any need for prosecutors to “conclusively determine” it. Nor is there any place for such a determination. Our country would be a very different (and very dangerous) place if prosecutors applied the SCO standard and citizens were obliged to prove “conclusively…that no criminal conduct occurred.”

Because they do not belong to our criminal justice vocabulary, the SCO’s inverted-proof-standard and “exoneration” statements can be understood only as political statements, issuing from persons (federal prosecutors) who in our system of government are rightly expected never to be political in the performance of their duties. The inverted burden of proof knowingly embedded in the SCO’s conclusion shows that the Special Counsel and his staff failed in their duty to act as prosecutors and only as prosecutors.

Second, and equally importantly: In closing its investigation, the SCO had only one job – to “provide the Attorney General with a confidential report explaining the prosecution or declination decisions reached by the Special Counsel.” 28 C.F.R. & 600.8(c). Yet the one thing the SCO was obligated to do is the very thing the SCO – intentionally and unapologetically – refused to do. The SCO made neither a prosecution decision nor a declination decision on the obstruction question. Instead, it transmitted a 182-page discussion of raw evidentiary material combined with its own inconclusive observations on the arguable legal significance of the gathered content. As a result, none of the Report’s Volume II complied with the obligation imposed by the governing regulation to “explain[] the prosecution or declination decisions reached.” Id.

The SCO instead produced a prosecutorial curiosity – part “truth commission” report and part law school exam paper. Far more detailed than the text of any known criminal indictment or declination memorandum, the Report is laden with factual information that has never been subjected to adversarial testing or independent analysis. That information is accompanied by a series of inexplicably inconclusive observations (inexplicable, that is, coming from a prosecutor) concerning possible applications of law to fact. This species of public report has no basis in the relevant regulation and no precedent in the history of special/independent counsel investigations.

An investigation of the President under a regulation that clearly specifies a very particular form of closing documentation is not the place for indulging creative departures from governing law. Under general prosecutorial principles, and under the Special Counsel regulation’s specific language, prosecutors are to speak publicly through indictments or confidentially in declination memoranda. By way of justifying this departure, it has been suggested that the Report was written with the intent of providing Congress some kind of “road map” for congressional action. See, e.g., Remarks of House Judiciary Committee Chairman Jerrold Nadler, 4/18/19 (Press Conference). If that was in fact the SCO’s intention, it too serves as additional evidence of the SCO’s refusal to follow applicable law. Both the language of the regulation and its “legislative” history make plain that the “[c]losing documentation” language was promulgated or the specific purpose of preventing the creation of this sort of final report. Under a constitution of separated powers, inferior Article II officers should not be in the business of creating “road maps” for the purpose of transmitting them to Article I committees.

With the release of the SCO Report, and despite all of the foregoing, the President has followed through on his consistent promise of transparency. He encouraged every White House staffer to cooperate fully with the SCO and, so far as we are aware, all have done so. Voluntary interviewees included the Counsel to the President, two Chiefs of Staff, the Press Secretary and numerous others. In addition, approximately 1.4 million pages of documents were provided to the SCO. This voluntary cooperation was given on the understanding (reached with the SCO) that information (i) gathered directly from the White House or White House staffers and (ii) having to do with Presidential communications, White House deliberations, law enforcement information, and perhaps other matter may be subject to a potential claim of executive privilege and, for that reason, would be treated by the SCO as presumptively privileged. Volume II of the report contains a great deal of presumptively privileged information, largely in the form of references to, and descriptions of, White House staff interviews with the SCO. It also includes reference to presumptively privileged documentary materials.

The President is aware that, had he chosen to do so, he could have withheld such information on executive privilege grounds, basing such an assertion on the established principle that to permit release of such information might have a chilling effect on a President’s advisors, causing them to be less than fully frank in providing advice to a President. Notwithstanding his right to assert such a privilege, and with a measure of reluctance born of concern for future Presidents and their advisors, the President has in this instance elected not to assert executive privilege over any of the presumptively privileged portions of the report. As a consequence, not a single redaction in the Report was done on the advice of or at the direction of the White House.

The President therefore wants the following features of his decision to be known and understood:

(2) His decision to permit disclosure of executive-privileged portions of the report does not waive any privileges or protections for the SCO’s underlying investigative materials such as, for example, FBI Form 302 witness interview summaries and presumptively privileged documents made available to the SCO by the White House.

(3) His decision does not affect his ability as President to instruct his advisors to decline to appear before congressional committees to answer questions on these same subjects. It is one thing for a President to encourage complete cooperation and transparency in a criminal investigation conducted largely within the Executive Branch; it is something else entirely to allow his advisors to appear before Congress, a coordinate branch of government, and answer questions relating to their communications with the President and with each other. The former course reflected the President’s recognition of the importance of promoting cooperation with a criminal investigation. The latter course creates profound separation of powers concerns and – if not defended aggressively – threatens to undermine the integrity of Executive Branch deliberations. The President is determined to protect from congressional scrutiny not only the advice rendered by his own advisors, but also by advisors to future Presidents.

A great deal is said these days about the rule of law and the importance of legal norms. In that spirit, and mindful of the frenzied atmosphere accompanying the Report’s release, the following should not be forgotten. Government officials, with access to classified information derived from a counterintelligence investigation and from classified intelligence intercepts, engaged in a campaign of illegal leaks against the President. Many of those leaks were felonies. They disclosed the identity of a U.S. person in violation of his civil rights; they misused intelligence for partisan political purposes; and they eroded public confidence in the integrity and impartiality of our intelligence services. The criminal investigation began with a breach of confidentiality executed by a very senior administration official who was himself an intelligence service chief. This leak of confidential information, personally directed by the former Director of the FBI, triggered the creation of the SCO itself – precisely as he intended it to do.

Not so long ago, the idea that a law enforcement official might provide the press with confidential governmental information for the proclaimed purpose of prompting a criminal investigation of an unidentified individual would have troubled Americans of all political persuasions. That the head of our country’s top law enforcement agency has actually done so to the President of the United States should frighten every friend of individual liberty. Under our system of government, unelected Executive Branch officers and intelligence agency personnel are supposed to answer to the person elected by the people – the President – and not the other way around. This is not a Democratic or a Republican issue; it is a matter of having a government responsible to the people – and, again, not the other way around. In the partisan commotion surrounding the released Report, it would be well to remember that what can be done to a President can be done to any of us.

These leaks and this investigation also caused immense and continuing interference with the functioning of the Executive Branch. Our constitution makes the President the sole constitutional officer “for whom the entire Nation votes, and [who] represent[s] the entire Nation both domestically and abroad.” Clinton v. Jones, 520 U.S. 681, 711 (1997) (Breyer, J., concurring). As a result, “[i]nterference with a President’s ability to carry out his public responsibilities is constitutionally equivalent to interference with the ability of the entirety of Congress, or the Judicial Branch, to carry out its public obligations.” Id. at 713. It is inarguable that the now-resolved allegation of “Russian collusion” placed a cloud over the Presidency that has only begun to lift in recent weeks. The pendency of the SCO investigation plainly interfered with the President’s ability to carry out his public responsibility to serve the American people and to govern effectively. These very public and widely felt consequences flowed from, and were fueled by, improper disclosures by senior government officials with access to classified information. That this continues to go largely unremarked should worry all civil libertarians, all supporters of investigative due process, and all believers in limited and effective government under the Constitution.

I respectfully ask you to include a copy of this letter in the Department’s records relating to the SCO investigation. 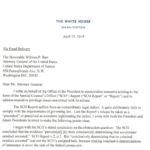