Re: DOJ Review of Intelligence Activities

This letter responds to your request for information relating to a review currently being conducted by the U.S. Department of Justice (Department) into certain activities involving the campaigns in the 2016 U.S. presidential election and certain related matters (Review). The Review is broad in scope and multifaceted, and is intended to illuminate open questions regarding the activities of U.S. and foreign intelligence services as well as non-governmental organizations and individuals.

It is now well established that, in 2016, the U.S. government and others undertook certain intelligence-gathering and investigative step directed at persons associated with the Trump Campaign. As the Attorney General has stated publicly at congressional hearings and elsewhere there remain open questions relating to the origins of this counter-intelligence investigation and the U.S. and foreign intelligence activities that took place prior to and during that investigation. The purpose of the Review is to more fully understand the efficacy and propriety of those steps and to answer, to the satisfaction of the Attorney General, those open questions. Among other things, the Review will seek to determine whether the investigations complied with applicable policies and laws. Accordingly, the Attorney General has directed that a team (Review Team) led by John Durham, the United States Attorney for the District of Connecticut, conduct the Review in order to better understand the activities leading up to and relating to the counter-intelligence investigation.

During the Review, Mr. Durham will continue to serve as U.S. Attorney for the District of Connecticut. The Review is being conducted primarily in the Washington, D.C. area by Mr. Durham and a number of U.S. Attorney’s Office personnel and other Department employees. The Department has made existing office space in Washington available for this work. Mr. Durham’s Review will be funded out of the U.S. Attorneys Salaries and Expenses appropriation.

The Attorney General looks forward to obtaining a better understanding of the critical period leading up to the 2016 presidential election, which to date has not fully been examined. As the U.S. approaches another election season, it would be most prudent to timely draw upon the lessons learned from our recent history, and to apply them responsibly and effectively to protect the interests of the American people, within the bounds of sound judgment and the rule of law. We appreciate your support to that end.

Please do not hesitate to contact this office if you have any additional questions or concerns. 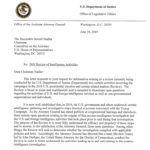