The Iowa State Fair’s straw poll results have been released. Despite the obnoxious behavior and pandering by most of the Democratic candidates during the fair, the polls truly do show the pulse of Iowa voters as the influential caucus draws closer.

In a near-tie, Joe Biden only barely defeated Elizabeth Warren by just 10 votes. This essentially means that they have tied, which leaves Democratic voters stuck between a senile old man who can’t stop making gaffes, and a socialist who pretended to be a Native American.

By contrast, Republican voters could not possibly be more unified: Over 96% of the poll’s Republican respondents approve of President Trump’s performance and back him for re-election. These are approval numbers not seen by any other Republican president in modern history, and proves that the base is still standing with the president despite the media’s endless slander.

While the Democrats continue viciously attacking each other and producing dead-heat contests, President Trump is cruising safely towards re-election. If this poll is an indication of the broader population’s sentiment, then it’s safe to say America will continue to prosper for another four years after November 2020.

The results of the 2019 Iowa State Fair’s straw poll are in, and have been posted to the Iowa Secretary of State’s website. After this year’s state fair saw a record-setting attendance of just under 1.2 million people over the course of its 11-day run, attendees participated in the straw poll to gauge the state’s sentiment on the candidates for all the major upcoming elections.

On the Democratic side, there were 24 candidates listed in the poll, including former Colorado Governor John Hickenlooper, who withdrew from the race on August 15. In that poll, former Vice President Joe Biden narrowly edged out a win over Senator Elizabeth Warren (D-Mass.) by a margin of just 10 votes, with 17.66 percent to Warren’s 17.19 percent, in a statistical tie. Mayor of South Bend Pete Buttigieg (D-Ind.) came in third with 13.79 percent, followed by Senator Bernie Sanders (D-Vt.) with 10.15 percent. No other candidate received more than 9 percent in the poll.

On the Republican side, President Donald Trump received over 96 percent support, with less than 4 percent voting for his only official primary challenger, former Governor Bill Weld (R-Mass.).

Also included were the results for Iowa’s four seats in the U.S. House of Representatives. In the one and only seat still held by a Republican after the 2018 midterms, Congressman Steve King (R-Iowa) is still the favorite for the nomination in 2020, with over 55 percent support; the next-highest Republican candidate is State Senator Randy Feenstra (R-Iowa), at just under 29 percent.

The first-in-the-nation contest of the 2020 presidential election, the Iowa caucus is just over five months away, scheduled for February 3, 2020. 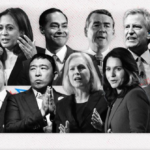