In his speech at a Whirlpool plant in Cleveland, Ohio, President Trump laid out a clear vision for his second term if he is re-elected. He specifically listed six goals that he will seek to achieve if he is given four more years in the White House.

The six promises, as described by local Cleveland affiliate KLFY, are as follows:

Several of these goals are already taking shape even before the end of his first term, with the Chinese virus already on the decline across the country, and with the mortality rate continuing to plummet. As the latest jobs numbers indicate, the American economy is already recovering rapidly from the sweeping and largely unnecessary lockdowns, proving that President Trump’s leadership on the economy is second-to-none.

And with several executive orders on such matters as lowering the costs of prescription drugs, or incentivizing companies to buy pharmaceutical products and medical equipment from America rather than China, the President has already proven that he is tailoring his America First measures specifically to address this pressing issue, further proving that protectionism and nationalism are still by far the best response to any problem, let alone a foreign one.

If this is the blueprint for the second term, then the last few months have already proven that this plan is all but guaranteed to be a success. As such, the best way to guarantee a continued steady recovery is to give the President another four years. 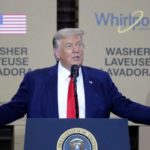