On April 23rd 2019, I visited the White House to see my old Boss, President Trump, in the Oval Office to discuss my next book THE WAR FOR AMERICA’S SOUL.

During our discussion, he gave me this document as proof of what the FakeNews Industrial Complex is keeping from the American people.

This list would be an incredible collection of achievements for a two-term President.

Donald Trump realized them in just his first 2 years as our 45th President.

 There are a record number of job openings.

 A record 73% of newly employed workers were people who were out of the workforce and who are now coming off the sidelines and into the workforce.

 The unemployment rate has remained at or below 4% for 13 straight months – it recently reached its lowest rate in nearly FIFTY YEARS.

 Wages grew by 3.2% over the past 12 months, the largest increase in 10 years. Wage growth in 2018 was fastest for the lowest wage earners.

 Hispanic-American unemployment in February fell to its lowest rate in history.

 Women’s unemployment is at its lowest rate in 65 years.

 Youth unemployment reached the lowest rate in nearly half a century.

 Over 5 million Americans have been lifted off food stamps since the election.

 Median income for Hispanic-Americans surpassed $50,000 for the first time ever.

 Home-ownership among Hispanics recently hit the highest rate in nearly a decade.

 The official poverty rates for African-Americans and Hispanic-Americans have reached their lowest levels ever recorded.

 A recent study found that 8 in 10 businesses plan to hire more workers this year.

 Signed the biggest package of tax cuts and reforms in history. Since then, almost $600 billion dollars poured back into the U.S. and more than 6 million workers received new bonuses, better jobs, and bigger paychecks.

 Under our tax cut, small businesses can now deduct 20% of their business income.

 The Pledge to America’s Workers has secured private-sector commitments to provide over 6.7 million jobs and training opportunities to American workers.

 Concluded a tremendous new trade deal with South Korea, and will begin trade negotiations with Japan to open new markets for American workers and farmers.

 Reached a breakthrough agreement with the EU to increase U.S. exports.

 Prescription drug prices declined in 2018, the first time in nearly half a century.

 In 2017 and 2018, the FDA approved more affordable generic drugs than ever before. Many drug companies are freezing or reversing planned price increases.

 We reformed the Medicare program to stop hospitals from overcharging seniors on their drugs—saving seniors hundreds of millions of dollars in 2018 alone.

 Reduced high-dose opioid prescriptions by 16% during my first year in office.

 The U.S. is the largest producer of oil and natural gas – surpassing Saudi Arabia and Russia. We are a net exporter of natural gas for the first time since 1957.

 Announced our withdrawal from the job-killing Paris Climate Accord.

 Launched whole-of-government approach to women’s economic empowerment around the world (W-GDP) with a goal of empowering 50 million women by 2025.

 Nuclear and ballistic missile testing in North Korea have stopped, hostages have been released, and the remains of our fallen warriors were returned home.

 Process has begun to make the Space Force the 6th branch of the armed forces.

 Recognized Jerusalem as the Capital of Israel, and moved the U.S. Embassy.

 ISIS has been driven out from all territory they once held in Iraq and Syria.

 We have begun building the Wall and support strong borders and no crime. 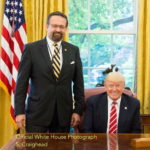 President Trump gave me this document in the Oval Office. USE IT!