In 1976, the National Emergencies Act was unanimously passed by the United States Congress. Its intention was to allow for American presidents to have sweeping executive power to deal with national crises. As the eminent legal scholar, Jonathan Turley, recently pointed out not only did Congress grant presidents this immense power, but a bevy of subsequent federal regulations allow for the president to “declare an immigration emergency.” Such broad executive authority, it was believed would be the best way to handle “an influx of aliens which either is of such magnitude or exhibits such other characteristics that effective administration of the immigration laws of the United States is beyond the existing capabilities [of authorities] in the affected areas.”

That is precisely what the country is faced with today along its southwestern border with Mexico. Regardless of what the “mainstream” media insists, the border is hotbed of violence and other human suffering. The fact that local authorities are overwhelmed by the threats along the border and that, until the rise of Donald Trump to the presidency, the federal government did not care one bit about addressing the illegal immigration problem, only ensured that the country would be facing a true emergency along its border.

Violence in Texas border towns alone have reached historic levels. Shortly before President Trump’s arrival at the border town of McAllen, Texas, Mexican authorities adjacent to McAllen engaged in a fierce firefight with drug cartels. After the firefight ended, Mexican police uncovered a mass grave of 21 dead Mexicans whose bodies were so badly burned and maimed that they could not be identified. Also, a 33-foot tunnel was discovered leading into the United States from Mexico which authorities believe was used to smuggle tons of illicit narcotics and to traffic human beings—many of them minors—into the United States from Mexico. Keep in mind that one-in-three young girls and women being trafficked into the United States by Mexican coyotes are sexually assaulted along their journey.

Such threats occur on a routine basis. In fact, the Mexican Drug War has killed more people—military, criminal, and civilians alike—since 2006 than both the American wars in Afghanistan and Iraq combined.

Because of the National Emergencies Act of 1974, as well as the fact that the president of the United States is mandated with managing (and resolving) national crises, President Trump has limitless authority to do whatever it takes to resolve the matter. There’s something more, also, regarding the declaration of emergencies. Previously, presidents from both parties have been given a wide berth to declare and resolve emergency situations. In 2009, President Barack Obama declared a national emergency to handle a national outbreak of swine flu. Famously, George W. Bush declared a state of emergency following 9/11.

According to U.S. News and World Report, 31 national emergencies declared by previous presidents that remain active today (most states of emergency must be renewed annually). Below is a list (compiled by the “Never Trump” CNN of all places) of the 31 ongoing states of emergencies, beginning with the Carter Administration until the present time:

The president has the capability to order the Pentagon, with its massive defense budget, to begin shifting money and personnel around to begin construction of a big, desperately needed border wall. Such a barrier—whether it be concrete or steel—would help to mitigate the ceaseless flow of illegal immigration into the United States and allow for America’s besieged border agents to have a chance at controlling the border. Without proper border security and immigration policies, the United States will continue to see threats flow into our territory. 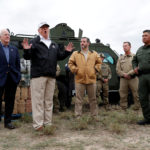