It has been two years since President Donald J. Trump made the noble move to offer his hand to the world’s greatest pariah, North Korean strongman, Kim Jong-un. Since the end of the Korean War in 1953, the West and North Korea have constantly teetered on the brink of another conflict. What’s more, going back to the 1980s, North Korea has sought out weapons of mass destruction to bolster their threatening posture to the United States and its regional allies–namely nuclear weapons. Even without nuclear capability, North Korea has maintained a larger military than that which was arrayed against it in the region.

The Americans kept a mid-sized force garrisoned in South Korea and the South Korean military, while more advanced and better trained than their North Korean rivals, were still outnumbered. In addition, the North Koreans have spent decades building up one of the most robust and threatening biological weapons capabilities. There is even concern that, thanks to their nuclear capabilities, the North Koreans have developed electromagnetic pulse weapons which could incapacitate all electronics, and may have loaded them aboard two indigenously-built satellites which Pyongyang launched into orbit in 2012 and 2017, respectively.

Through all of this, a succession of North Korean leaders maintained their willingness to not only use these weapons of destruction, but they sought to be as provocative to their neighbors–and the United States–as possible.

On the American side, every president since Dwight D. Eisenhower has refused to compromise with the utterly opaque regime that is Pyongyang, despite having been unable to either oust the regime or threaten them into submission. In other words, for decades, the West has tried to either out-negotiate North Korea or act as a supplicant to Pyongyang’s growing list of demands. Neither approach has worked. It was not until the advent of Donald Trump that new possibilities in the U.S.-North Korean relationship opened. Now, the United States would have a leader who would push for peace whenever he can…without giving in to America’s enemies, as the former President Barack Obama did with both Iran and Cuba.

By simply agreeing to meet with the leader of North Korea–without preconditions–President Trump helped to ensure that the world would eventually a two-year reprieve from Kim Jong-un’s escalatory rhetoric and dangerous actions. For two years, the surprise missile launches and the race to acquire nuclear weapons capabilities in North Korea were put on hold. President Trump bought the world time.

Remember, it was two years ago that early warning sirens began blasting across the Hawaiian islands, after a twitchy emergency response operator erroneously sent out a mass text message across the Emergency Management System, claiming that a North Korean missile was inbound–and Hawaiians believed they had mere minutes to seek shelter. Not since Pearl Harbor in the Second World War had Hawaii been so viscerally reminded of its vulnerability. Two years ago, before President Trump first reached out to young Kim of North Korea, as those early warning klaxons blared throughout the Hawaiian islands, a desperate father was captured on cell phone video ripping open a manhole cover in the middle of a busy thoroughfare, trying–in vain–to secret away his innocent two year-old daughter in a place he thought would be safe from a North Korean nuclear missile strike.

When he took office in January 2017, President Trump and his new national security team were given a shocking briefing by the outgoing Obama national security team: they told President Trump that North Korea had grown into such a threat under their watch, that it was likely some kind of conflict would erupt between the West and Hermit Kingdom within two years, if nothing were done to alter the course of events. Obama, the man who vowed during the 2008 campaign to meet with any world leader without preconditions–had allowed for the North Koreans to become so threatening that within two years of his successor’s first term, a nuclear war was likely to erupt on the Korean peninsula.

Unlike his predecessor, though, President Trump was not a pushover; he was not prepared to make a deal–any deal–just to say that he had one. When it became apparent that the North Koreans expected to return to the status quo ante of U.S.-North Korean diplomacy, wherein Americans gave up their interests in exchange for ambiguous North Korean commitments, Trump unexpectedly walked out. The same commentators in the Press who decried his initial attempts to make peace pounced on the President for either being too foolish to try to make peace with North Korea or, for not simply taking on a more war-like footing. The President can never win in their eyes. But each move that the President has made has given American citizens and the world the one thing it needed: actual peace.

Thanks to Trump’s diplomacy, Pyongyang is now behind on their ballistic missile tests; they’re also having to rebuild launch sites and other critical facilities that they had previously dismantled as a sign of good faith. While there’s no doubt that, unless a new round of talks can be undertaken soon, North Korea will resume its threatening behavior, the Trump Administration has successfully kept the North Korean threat under control. This is what the Obama Administration was incapable of doing. So, even if the diplomacy is over, nothing was lost. What’s more, President Trump bought time, giving Americans some temporary respite. Meanwhile, the American military and their regional allies and partners have had time to continue preparing for armed conflict, if diplomacy fails–all the while Trump keeps the line of communication open with Pyongyang.

Make no mistake: the President’s policies have kept America safe from North Korea. 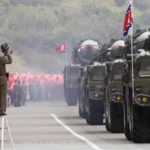 President Donald J. Trump is Protecting You from the North Korean Threat