One thing needs to be made clear about the Democrats’ rabid push for gun control. It is not just some knee-jerk reaction that happens every time a mass shooting occurs; it is part of a carefully thought-out strategy by the Democratic Party in their quest for totalitarian control over you.

Just consider the one other Amendment that Democrats are fighting against most viciously: The First. Whether it’s their attempts to eradicate freedom of religion or their Orwellian efforts to police speech on social media, the Left understands that freedom of expression is the greatest weapon against their Socialist vision for America. And the Second Amendment is the greatest defense of the First Amendment.

These two simultaneous campaigns to eliminate your first freedoms are not a coincidence. The Founders, in their great wisdom, knew exactly what it took to stand up to tyranny, and so does the Left. If the Left succeeds in tearing down these two sacred rights, then everything else the Founders gave us will fall even faster. That is why we must never give up our guns, and never give up our right to be heard.

The majority of 2020 candidates called for mass gun control Saturday following the deadly shooting at an El Paso Walmart, which resulted in at least 18 fatalities and dozens of injuries.

Police responded to reports of an active shooter at the Cielo Vista Mall Saturday morning after a male suspect opened fire in the Walmart’s parking lot before proceeding inside. At least 18 people were killed and dozens more injured, according to ABC News. The gunman is in police custody, but El Paso Police Department Sgt. Robert Gomez said they have not yet determined a motive.

President Trump responded to the tragedy on Twitter: “Terrible shootings in ElPaso, Texas. Reports are very bad, many killed. Working with State and Local authorities, and Law Enforcement. Spoke to Governor to pledge total support of Federal Government. God be with you all!”

Many Democrat 2020 candidates responded to the mass shooting on social media, calling for gun control and urging Congress to take action.

“We must outlaw all assault style weapons for civilian use,” Marianne Williamson (D) wrote. “Even then, there will still be millions of them on the street. Next we need to outlaw the manufacture and sale of the bullets that they carry.”

“Far too many communities have suffered through tragedies like this already,” Sen. Elizabeth Warren (D-MA) tweeted. “We must act now to end our country’s gun violence epidemic.”

“Sadly, after each of these tragedies the Senate does nothing,” Sen. Bernie Sanders (I-VT) echoed. “That has got to change.” 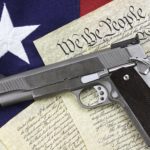 Our Take: Why the Democrats Want to Eliminate the First Two Amendments to our Constitution