President Trump’s decision to replace John Bolton with Robert O’Brien as National Security Adviser is significant for many reasons. From O’Brien’s extensive background in the State Department, to his hostage negotiation skills, to his book While America Slept in 2016, it is clear that O’Brien is experienced, level-headed, and agrees with President Trump that America must never “lead from behind” ever again.

But perhaps the most important aspect of O’Brien’s selection is the fact that because he is a much more low-profile individual than his successors, he will not elevate the position of NSA beyond its basic purpose. And in doing so, most of the weight of future national security decisions will lie where they should: With the President of the United States, thus giving him much more control over these matters going into the future.

Want to find out more, or tell us what you think? Tune in now here: https://youtu.be/SVfVxtwBEOk

Trump revealed his pick on Twitter: “I am pleased to announce that I will name Robert C. O’Brien, currently serving as the very successful Special Presidential Envoy for Hostage Affairs at the State Department, as our new National Security Advisor. I have worked long & hard with Robert. He will do a great job!”

O’Brien helped to gain the release of American rapper A$AP Rocky, after he was arrested and detained in Sweden earlier this year after getting into a street altercation.

He served as a senior foreign policy advisor to then-Gov. Mitt Romney (R-MA) and Gov. Scott Walker (R-WI) in their presidential campaigns. Romney tweeted Wednesday, after the president made the announcement of his appointment.

O’Brien has some experience with Afghanistan, which the president is trying to wind down the U.S. troop presence in. He served as Co-Chairman of the U.S. Department of State Public-Private Partnership for Justice Reform in Afghanistan under the Bush and Obama administrations, according to his State Department biography.

He also served as a member of the U.S. Cultural Property Advisory Committee, which advises the government on issues relating to the trafficking of antiquities and other cultural items. In 2005, he served as a U.S. Representative to the 60th session of the United Nations General Assembly, where he worked with then-U.S. Ambassador to the UN John Bolton. He also served as a major in the U.S. Army Reserve.

O’Brien is also the co-founding partner of litigation firm Larson O’Brien LLP in Los Angeles, which focuses on complex litigation and international arbitration. He is a graduate of the Boalt Hall School of Law at U.C. Berkeley and UCLA. 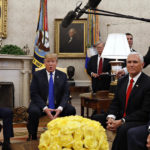 Our Take: Why Robert O’Brien Makes for a Strong National Security Adviser