The recent letter from the White House’s lawyer to Speaker Nancy Pelosi could go down as one of the most significant government documents in recent memory. Not only does it mark a turning point in the ongoing impeachment battle between President Trump and Pelosi, but it could also set a new standard of strategy and backbone for the GOP…if they follow his example.

For far too long, the GOP has had more than enough institutional power at its fingertips, from congressional committees to the White House, yet has barely done anything at all to fight back against the Left. While Obama and congressional Democrats have fully utilized every tool at their disposal, Republicans wasted their congressional majority and their other positions of governmental power with infighting, virtue-signaling and capitulation.

President Trump understands that this is a war for the very fate of our nation. When will the Republican Party realize this as well, and start acting like our nation depended on it?

Republican Chair of the Senate Judiciary Committee Lindsey Graham invited Rudy Giuliani, President Donald Trump’s personal lawyer, to testify before the committee Tuesday amid the House’s decision to launch an official impeachment inquiry into the president.

Giuliani has been vocal about stories of corruption in Ukraine, sounding off on allegations that former Vice President Joe Biden influenced the decision for the country to fire a top prosecutor. That prosecutor, Viktor Shokin, was looking into a Ukrainian company that Biden’s son, Hunter, sat on the board of.

“Have heard on numerous occasions disturbing allegations by @RudyGiuliani about corruption in Ukraine and the many improprieties surrounding the firing of former Prosecutor General Viktor Shokin.”

“Given the House of Representatives’ behavior, it is time for the Senate to inquire about corruption and other improprieties involving Ukraine,” Graham tweeted Tuesday morning. “Therefore I will offer to Mr. Giuliani the opportunity to come before the Senate Judiciary Committee to inform the committee of his concerns.”

“Therefore I will offer to Mr. Giuliani the opportunity to come before the Senate Judiciary Committee to inform the committee of his concerns.”

The House launched an official impeachment inquiry into Trump on Sept. 24 after an August whistleblower complaint alleged that the president had asked Ukrainian officials to look into Biden and his son. The complaint was largely based off of a July 25 phone call between Trump and Ukrainian President Volodymyr Zelensky.

If the House passes a majority vote on impeachment, the inquiry moves to the Senate, where a trial is typically held to determine if a president is impeached. 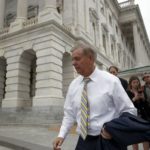 Our Take: When will Republicans Fight Back like President Trump?