The historic Brexit referendum in the U.K. and the equally historic election of President Donald J. Trump here in the U.S. are directly related, to the point that one would not happen without the other.

Perhaps it is no coincidence then that two of the most important dates in both events are set to occur on the same day: On the very same day that President Trump could finally be acquitted and the despicable impeachment trial could end once and for all, the United Kingdom will finally and officially leave the European Union. Both represent significant turning points in the course of both the MAGA agenda and the Brexit movement, which have faced unbelievable resistance from the political elite, the media, the Left, and other forces that seek to stop both national sovereignty movements.

And just as these two are directly linked to each other, so too are they directly responsible for the subsequent spread of national sovereignty movements all around the world, from Brazil and Australia to Italy and India. As “Mr. Brexit” himself, Nigel Farage, said on AMERICA First yesterday, such votes and movements are a rejection of “Soros-ism” and “Clinton-ism” that seek to spread globalism and undermine our national identities and borders, with the people instead standing up for their countries and their right to self-determination.

Today may be the end of the BREXIT saga, and possibly the end of impeachment and the dawn of a new era for the MAGA agenda, but that does not mean that the global movement is dead. Our fight has only just begun. 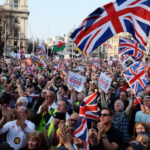 Our Take: What Brexit and MAGA Mean for the Rest of the World