In our wide-ranging interview with LTG Jerry Boykin (ret.) on yesterday’s AMERICA First, General Boykin made a very strong argument with regards to one aspect of American society that we do not give much thought to these days: The role of masculinity and real men.

One of the many harmful effects of the Left’s efforts to eliminate gender in our society is the ostracizing of the very concept of positive masculinity, derogatorily referred to as “toxic masculinity.” Not only does this serve the purpose of breaking down the traditional family structure, but it also demonizes a noble trait that has defined our nation’s greatest heroes, from the Founding Fathers to our most revered military commanders.

Just as women need to be feminine, men need to be masculine. Otherwise language and words have no meaning. (Which is, of course, the Left’s deconstructionist intent). Traditional gender roles are meant to complement each other and contribute to a stable society, which is what the Left fears most. So if we are to protect American society and defeat the Left, we must protect the basic Truth behind every single thing that they are trying to dismantle, which includes unequivocally embracing masculinity, the role men have played as protectors, providers and fighters for our civilization. 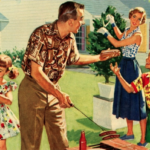 Our Take: We Need Real Men in Our Society