When it comes to gun control, the potential harm of any of the Democrats’ gun control proposals is two-fold: First, they ultimately want to wipe out your Constitutional right to keep and bear arms; and second, these proposals will only affect law-abiding citizens, while the criminals who commit mass shootings will still find their way around the laws and get a gun regardless.

Whether it’s the Parkland shooter having over 40 encounters with law enforcement prior to his rampage, or the Odessa shooter failing a background check in a previous attempt to buy firearms, it has been proven time and again that gun control measures never work.

Instead, if red flag laws or other more restrictive background checks were imposed, we would only see more direct instances of regular Americans having their privacy invaded in the most shameless ways possible. A father would not be allowed to pass down his firearm to his son, nor would a widow be allowed to give her late husband’s guns to someone else in the family; even bonding family experiences, like a caller on yesterday’s show who allowed his son to bid on a gun at a gun show, would be eliminated as freedoms are surrendered for the sake of “security.”

That is why such measures must never be allowed to pass into law. Instead of guns being symbolic of our freedom and even family bonding, they would be forever categorized as a symbol of violence, as only the violent would be capable of having them. Then we would live in a society that would have neither freedom nor security.

In a news conference on Monday, state law enforcement officials revealed that the Odessa gunman, Seth Ator, had previously failed a background check when attempting to buy a gun legally, Reuters reports.

ATF agent John Wester confirmed that when Ator had tried to purchase a gun, “his name was run through the National Instant Criminal Background Check System,” after which he was denied the purchase. He previously had “convictions in 2002 for criminal trespass and evading arrest.”

Reflecting this revelation, President Donald Trump emphasized that background checks alone are not a solution, as they would not have prevented most mass shootings such as the Odessa rampage, with the president referring to Ator as “a very sick person.”

Shortly after being fired from his trucking job, Ator first opened fire on state troopers who pulled him over on the interstate, then continued firing “indiscriminately” as he drove through the cities of Odessa and Midland. He killed seven people and injured 23 others before he was shot and killed by police. 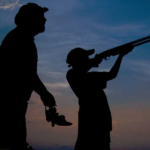 Our Take: Universal Background Checks Will Only Hurt Law-Abiding Americans