If you want all the proof you need that the “whistleblower” story is a nothing-burger, look no further than the most recent statements from the government of the country in question.

Surely, if the Democrats’ version of events were true and President Trump was trying to coerce a foreign government into doing his bidding, then representatives of that government surely would be the first to come forward and confirm whether or not the Democrats’ fears are based in fact.

Yet Ukraine’s Foreign Minister, Vadym Prystaiko, has come out and said the exact opposite: He has defended President Trump, insisting that he was well within his boundaries to inquire about the investigation into Hunter Biden’s dubious business dealings, while also confirming that there was “no pressure” from President Trump on Ukraine’s President, Volodymyr Zelensky.

Of course, it’s not like the Democrats are about to let such inconvenient facts get in the way of their destructive partisan behavior. But it will certainly make this accusation as laughable as their last try to take down the President, the whole Russia “Collusion” hoax.

Ukrainian Foreign Minister Vadym Prystaiko said Saturday that President Donald Trump did not exert any pressure on his Ukrainian counterpart in a telephone call that has become the subject of media reports.

Prystaiko reportedly noted that “leaders have the right to discuss any problems that exist.”

The conversation has produced a purported White House intelligence agent whistleblower and reports that Trump tried to force Ukrainian President Volodymyr Zelensky to investigate the business dealings of former Vice President Joe Biden’s son and Hillary Clinton’s allegation that Trump asked the Ukrainians to interfere in the 2020 elections. The former secretary of state tweeted Friday: “The president asked a foreign power to help him win an election. Again.”

“I know what the conversation was about and I think there was no pressure,” Prystaiko told Hromadske. “There was talk, conversations are different, leaders have the right to discuss any problems that exist. This conversation was long, friendly, and it touched on many questions, sometimes requiring serious answers.”

Trump was quick to tweet his approval of the Prystaiko’s comments, agreeing that his conversation with the Ukrainian president was “long, friendly, and it touched on many questions.”

Zelensky and Trump are scheduled to meet as planned at the United Nations General Assembly next week. 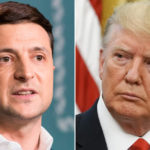