Despite the endless petulant whining from some on the far-right, the President has been taking numerous steps to crack down on mass immigration, both legal and illegal, and fulfilling many of his signature promises.

He has repealed DACA and DAPA. He has ended Temporary Protected Status (TPS) for over a quarter of a million legal Central American immigrants living in the United States. He has twice reduced the cap on the maximum number of refugees permitted into the United States, bringing it to its lowest totals ever. He is eliminating H-4 visas for almost 100,000 spouses of legal immigrants. He has ordered asylum-seekers to remain back in Mexico while their asylum requests are being processed. And, thanks to the National Emergency declaration, he has begun building the Wall.

Now, as he rolls out his comprehensive new immigration plan, The Daily Caller has just revealed his latest plan to combat illegal immigration: Using the Insurrection Act of 1807 to deport illegals who are already here.

Although the Insurrection Act has been around for over 200 years, it has very rarely been used. It is to be utilized whenever “unlawful obstructions, combinations, or assemblages, or rebellions,” make it “impracticable to enforce the laws of the United States,” and thus gives the President the authority to use the armed forces against such rebellions or obstructions. The Insurrection Act was used to declare the Civil War, as well as Eisenhower’s first wave of mandated school desegregation in 1957. Most recently, the Act was used by President George H.W. Bush to quell the violent Los Angeles riots of 1992.

When you combine the invoking of this powerful law with the President’s recent National Emergency declaration, it could not be clearer that President Trump absolutely takes the issue of immigration very seriously. He calls it for what it is: An emergency, a crisis of our nation’s character, and the tipping point wherein the fate of our nation hangs in the balance. As such, he is doing everything that he can to fight for America. Don’t let Ann Coulter tell you otherwise.

By Amber Athey and Vince Coglianese

President Donald Trump is planning on using the Insurrection Act to remove illegal immigrants from the United States, The Daily Caller has learned.

According to multiple senior administration officials, the president intends to invoke the “tremendous powers” of the act to remove illegal immigrants from the country.

Under the Insurrection Act of 1807, the president has the authority to use the National Guard and military in order to combat “unlawful obstruction or rebellion” within U.S. borders. The act was last invoked in 1992 by George H.W. Bush to quell the Los Angeles riots, and was also used by Eisenhower in 1957 to enforce school desegregation in the south.

An official expressed concerns that Trump’s use of the act’s powers would face legal challenges, pointing to the lawsuits against the president’s travel ban from majority-Muslim countries. However, as the official noted, the travel ban ultimately prevailed in the Supreme Court.

In addition to the Insurrection Act, the president is also considering declaring the country full and insisting that the U.S. can no longer handle the massive influx of illegal immigrants. 2019 is currently on pace to reach the highest levels of illegal immigration in a decade.

“If you take a ship and it holds 1,000 people maximum — one more person and the ship is going to collapse,” the official explained. “The country is full.”

“Our hospitals are full, our detention centers are full,” they added.

ICE facilities were forced to release 100,000 illegal immigrants in the first three months of 2019 because of overcrowding in detention centers.

Separately, the president unveiled a new immigration plan Thursday that focuses on border security and merit-based legal immigration. The plan, which was co-authored by top aides Jared Kushner and Stephen Miller, would increase the proportion of visas granted to highly-skilled immigrants and also establish a self-sustaining border security fund. 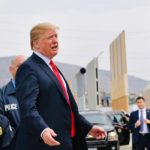 Our Take: Trump’s Use of the Insurrection Act