One of the most common talking points utilized by the Left against President Trump is to compare any of the faux “scandals” of his administration to the grandfather of all political scandals in America, WaterGate. But if anything, this latest Ukraine episode is actually the polar opposite of the scandal that brought down Richard Nixon.

In WaterGate, there was an attempted burglary of a rival party’s headquarters for the purpose of spying on that party in an upcoming presidential election. Evidence eventually came out suggesting that the then-incumbent President of the United States was involved in the cover-up of the break-in, and thus was eventually forced out of office via resignation (not impeachment).

With today’s scandal, that we should start calling ObamaGate, a political party’s nominee was spied upon during an election, and subsequently spied upon further as President. When said President tried to work with a relevant foreign leader to accumulate information regarding this illegal surveillance and foreign election interference, the political party guilty of the original crimes accused him of being the guilty party. An utter reversal of reality.

This is the key difference between the two events: One was about a President complicit in wrongdoing and trying to cover it up after the fact, while the other was trying to investigate the wrongdoings of his predecessor, and Obama’s collusion with foreign powers to subvert our election. One was evading justice, while the other was pursuing it. That is how history will look back on the Ukraine ordeal, the attempted impeachment, and the crimes of Obama and his co-conspirators.

Apparently it’s Watergate all over again, says former Watergate reporter Carl Bernstein in regard to the recent news about President Trump allegedly pressuring Ukrainian President Volodymyr Zelensky to investigate former Vice President Joe Biden’s alleged use of his influence to have Zelensky fire a prosecutor who was investigating his son’s business dealings.

Speaking on CNN’s “Reliable Sources” on Sunday, Bernstein said that the “whistleblower” who accused the president of pressuring Zelensky during a July phone call was a “grievous abuse of power” akin to that of former President Richard Nixon.

“If the reporting of Shane Harris and The Wall Street Journal is accurate, and it seems to be, it clearly moved toward a grievous abuse of power by the president of the United States,” Bernstein said, as reported by Fox News. “I keep getting asked, ‘Are there echoes of Watergate in this?’ There are in the following ways. Watergate was very much an attempt by Richard Nixon to undermine the Democratic electoral process.”

As The Daily Wire’s Joseph Curl reported on Monday, The Wall Street Journal published an article last week alleging that President Trump had pressured Zelensky “eight times” to “cooperate with his personal lawyer Rudy Giuliani on an investigation into Biden’s son, Hunter, who worked with a natural gas company owned by a Ukrainian oligarch.”

“Biden in 2016, meanwhile, reportedly called for the dismissal of a Ukrainian prosecutor who had been investigating allegations about Hunter,” reported Curl. “At the time, Hunter Biden held a directorship with the company, earning $50,000 a month. There are also allegations that as vice president, Biden threatened to withhold U.S. aid unless the prosecutor was fired.”

In the same CNN interview, Bernstein went on to say that Nixon simultaneously used “political espionage and sabotage” to undermine a strong Democratic candidate like Edmund Muskie in order to face off against the weaker George McGovern in the 1972 election.

“Something of the same thing seems to be happening here where Biden, who Trump and his people have said they fear the most, in terms of being an opponent, has been the object of these, perhaps, dirty tricks,” Bernstein continued. “One thing Nixon never did was engage a foreign power to investigate a candidate running for office in the United States. It is a grievous offense if this is what happened.”

It remains to be seen just how scandalous the recent Ukraine-related revelations are, however. On Sunday, President Trump revealed that the underlying intelligence community whistleblower had no firsthand knowledge of the call. He also claimed the Ukrainian government rebuked the charge that he pressured Ukraine to investigate Hunter Biden’s business dealings.

“Now the Fake News Media says I ‘pressured the Ukrainian President at least [eight] times during my telephone call with him,’” Trump tweeted on Sunday night. “This supposedly comes from a so-called ‘whistleblower’ who they say doesn’t even have a first hand account of what was said. More Democrat/Crooked Media con.”

“Breaking News: The Ukrainian Government just said they weren’t pressured at all during the ‘nice’ call,” Trump continued. “Sleepy Joe Biden, on the other hand, forced a tough prosecutor out from investigating his son’s company by threat of not giving big dollars to Ukraine. That’s the real story!” 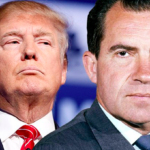 Our Take: Trump’s Ukraine Call is No WaterGate